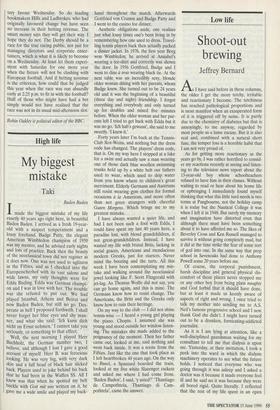 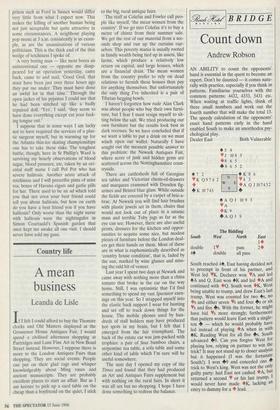 AI have said before in these columns, the older I get the more tetchy, irritable and reactionary I become. The tetchiness has reached pathological proportions and is most manifest when an exasperated form of it is triggered off by noise. It is partly due to the chemistry of diabetes but that is annoyingly, to me anyway, regarded by most people as a lame excuse. But it is also real and, combined with a natural short fuse, the temper loss is a horrible habit that I am not very proud of.

As for getting more reactionary as the years go by, I was rather horrified to consid- er my reactions recently at seeing and listen- ing to the television news report about the 13-year-old boy whose schoolteachers refused to have him in their classes. Without waiting to read or hear about his home life or upbringing I immediately found myself thinking that what this little turd needs is two terms at Pangbourne, not the holiday camp it is today but the Nautical College it was when I left it in 1948. But surely my memory and imagination have distorted even that although there must have been something about it to have affected me so. The likes of Beverley Cross and Ken Russell managed to survive it without going completely mad, but it did at the time strike the fear of some sort of god into one. In the same way that prep school in Sevenoaks had done to Anthony Powell some 20 years before me.

Of course, the corporal punishment, harsh discipline and general physical dis- comfort of those places never stopped me or any other boy from being plain naughty and God forbid that it should have done, but at least it made us keenly aware of aspects of right and wrong. I once tried to talk my mother into sending me to A.S. Neil's famous progressive school and I now thank God she didn't. I might have turned out to be a drunken, fornicating-addicted journalist.

As it is I am lying at attention, like a well-disciplined guardsman waiting for my consultant to tell me that dialysis is upon me. Yesterday, at their invitation, I took a peek into the ward in which the dialysis machinery operates to see what the future holds. I noticed that everyone who was going through it was asleep and I asked a doctor was it because it made everyone feel ill and he said no it was because they were all bored rigid. Quite literally. I reflected that the rest of my life spent in an open prison such as Ford in Sussex would differ very little from what I expect now. This makes the killing of another human being not just acceptable but quite attractive in some circumstances. A neighbour playing pop music at 3 a.m. consistently is an exam- ple, as are the assassinations of various politicians. This is the thick end of the thin wedge of tetchiness I spoke of.

A very boring man — like most bores an unintentional one — opposite me disap- peared for an operation yesterday, came back, came to and said, 'Good God, that must have been just over three hours ago they put me under. They must have done an awful lot in that time.' Through the open jacket of his pyjamas I could see that he had been stitched up like a badly repaired doll. 'Yes', I said, 'they seem to have done everything except cut your fuck- ing tongue out.'

I suppose that in some ways I am lucky not to have required the services of a plas- tic surgeon myself, but in warming up for the Atlanta thin-ice skating championships one has to take these risks. The toughest battle, though, here in St Phillip's Ward is surviving my hourly observations of blood sugar, blood pressure, etc, taken by an ori- ental staff nurse I call Pol Pot who has severe halitosis. Another acute attack of tetchiness and I will prescribe pints of mint tea, boxes of Havana cigars and garlic pills for her. There used to be an ad which told you that not even your best friend could tell you about halitosis, but how on earth do you have a best friend you if you have halitosis? Only worse than the night nurse with halitosis were the nightingales in Simon Courtauld's Spanish garden that once kept me awake all one visit. I should never have sold my guns.