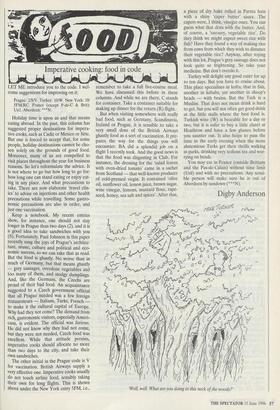 Holiday time is upon us and that means eating abroad. In the past, this column has suggested proper destinations for impera- tive cooks, such as Cadiz or Mexico or Sate. But one is forced to accept that, for some people, holiday destinations cannot be cho- sen solely on the grounds of good food. Moreover, many of us are compelled to visit places throughout the year for business reasons. So let's reformulate the advice. It is not where to go but how long to go for: how long one can stand eating or enjoy eat- ing in any place. And what precautions to take. There are now elaborate 'travel clin- ics' to advise on injections and other health precautions while travelling. Some gastro- nomic precautions are also in order, and just one vaccination.

Keep a notebook. My recent entries show, for instance, one should not stay longer in Prague than two days (2), and it is a good idea to take sandwiches with you (S). Fortunately, Paul Johnson in this paper recently sang the joys of Prague's architec- ture, music, culture and political and eco- nomic success, so we can take that as read. But the food is ghastly. No worse than in much of Germany, but that means ghastly — grey sausages, overdone vegetables and too many of them, and stodgy dumplings. And, like the Germans, the Czechs are proud of their bad food. An acquaintance suggested to a Czech government official that all Prague needed was a few foreign restaurateurs — Italians, Turks, French to make it the cultural capital of Europe. Why had they not come? The demand from rich, gastronomic visitors, especially Ameri- cans, is evident. The official was furious. He did not know why they had not come, but they were not needed, Czech food was excellent. While that attitude persists, imperative cooks should allocate no more than two days to the city, and take their own sandwiches.

The other initial in the Prague code is V for vaccination. British Airways supply a very effective one. Imperative cooks usually do not touch airline food, sensibly taking their own for long flights. This is shown above under the New York entry 5FM, i.e., remember to take a full five-course meal. We have discussed this before in these columns. And while we are there, C stands for container. Take a container suitable for making up dinner for the return (R) flight.

But when visiting somewhere with really bad food, such as Germany, Scandinavia, Ireland or Prague, it is sensible to take a very small dose of the British Airways ghastly food as a sort of vaccination. It pre- pares the way for the things you will encounter. BA did a splendid job on a flight I recently took. And the good news is that the food was disgusting in Club. For instance, the dressing for the 'salad leaves with oven-dried tomato' came in a sachet from Scotland — that well-known producer of cold-pressed virgin. It contained 'olive oil, sunflower oil, lemon juice, brown sugar, wine vinegar, lemons, mustard flour, rape- seed, honey, sea salt and spices'. After that, `Well, well. What are you doing in this neck of the woods?' a piece of dry hake rolled in Parma ham with a shiny 'caper butter' sauce. The capers were, I think, vinegar ones. You can guess what that does with the butter. And, of course, a 'savoury, vegetable rice'. Do they think we might expect sweet rice with fish? Have they found a way of making rice from cows from which they wish to distance their vegetable rice? Anyway, after toying with this lot, Prague's grey sausage does not look quite so frightening. So take your medicine. But don't overdo it.

Turkey will delight any good eater for up to ten days. But you have to cruise about. This place specialises in kofta, that in fish, another in kebabs, yet another in sheep's heads — with brains. But the Turk is a Muslim. That does not mean drink is hard to get, but you will not often get good drink at the little stalls where the best food is. Turkish wine (W) is bearable for a day or two, but it is safer to buy a little claret at Heathrow and have a few glasses before you saunter out. It also helps to pass the time in the early evening when the more abstemious Turks get their thrills walking in parks, drinking very tedious tea and wor- rying on beads.

You may eat in France (outside Brittany and the Pas-de-Calais) without time limit (Unl) and with no precautions. Any sensi- ble person will make sure he is out of Aberdeen by sundown (***N).