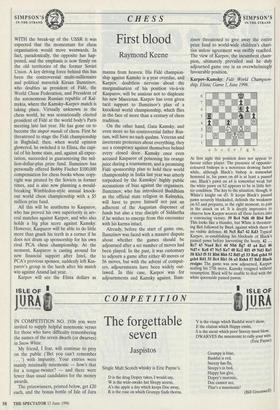 WITH the break-up of the USSR it was expected that the momentum for chess organisation would move westwards. In fact, paradoxically, the opposite has hap- pened, and the emphasis is now firmly on the old territories of the former Soviet Union. A key driving force behind this has been the controversial multi-millionaire and political maverick Kirsan Ilumzinov, who doubles as president of Fide, the World Chess Federation, and President of the autonomous Russian republic of Kal- mykia, where the Kamsky–Karpov match is taking place. Virtually unknown in the chess world, he was sensationally elected president of Fide at the world body's Paris meeting late last year. He has gone on to become the stupor mundi of chess. First he threatened to stage the Fide championship in Baghdad; then, when world opinion glowered, he switched it to Elista, the capi- tal of his home state, and, against all expec- tation, succeeded in guaranteeing the mil- lion-dollar-plus prize fund. Ilumzinov has personally offered Bobby Fischer $100,000 compensation for chess books whose copy- right was pirated by the Soviets in former times, and is also now planning a mould- breaking Wimbledon-style annual knock- out world chess championship with a $5 million prize fund.

All this will be anathema to Kasparov, who has proved his own superiority in sev- eral matches against Karpov, and who also holds a big plus score against Kamsky. However, Kasparov will be able to do little more than gnash his teeth in a corner if he does not drum up sponsorship for his own rival PCA chess championship. At the moment, Kasparov is casting around for new financial support after Intel, the PCA's previous sponsor, suddenly left Kas- parov's group in the lurch after his match win against Anand last year.

Karpov will see the Elista dollars as manna from heaven. His Fide champion- ship against Kamsky is a year overdue, and Karpov, doubtless nervous about the marginalisation of his position vis-à-vis Kasparov, will be anxious not to displease his new Maecenas. Karpov has even given tacit support to Ilumzinov's plan of a knockout world championship, which flies in the face of more than a century of chess tradition.

On the other hand, Gata Kamsky, and even more so his controversial father Rus- tam, will have no such qualms. Veteran and inveterate protesters about everything, they see a conspiracy against themselves behind every closed door. Kamsky once even accused Kasparov of poisoning his orange juice during a tournament, and a promising Fide sponsorship plan to hold their world championship in India last year was utterly torpedoed by the Kamskys' highly public accusations of bias against the organisers. Ilumzinov, who has introduced Buddhism as the official state religion in Kalmykia, will have to prove himself not just an adherent of the Augustan dispenser of funds but also a true disciple of Siddartha if he wishes to emerge from this encounter with his karma intact.

Already, before the start of game one, Ilumzinov was faced with a massive dispute about whether the games should be adjourned after a set number of moves had been played. In the past, it was customary to adjourn a game after either 40 moves or 56 moves, but with the advent of comput- ers, adjournments have been widely out- lawed. In this case, Karpov was for adjournments and Kamsky against. Ilum- zinov threatened to give away the entire prize fund to world-wide children's chari- ties unless agreement was swiftly reached. The view of Karpov, the incumbent cham- pion, ultimately prevailed and he duly adjourned game one in an overwhelmingly favourable position.

At first sight this position does not appear to favour either player. The presence of opposite- coloured bishops is a notorious drawing factor while, although Black's bishop is somewhat hemmed in, his pawn on d4 is at least a passed one. Black's pawn on a4 is somewhat weak but the white pawn on b2 appears to be in little bet- ter condition. The key to the situation, though, is White's knight on d3. It keeps Black's passed pawn securely blockaded, defends the weakness on b2 and prepares, at the right moment, to join in the attack on a4. It is deeply impressive to observe how Karpov weaves all these factors into a convincing victory. 39 Rc4 Nd6 40 Rb4 Ra6 This looks like a blunder, but White is threaten- ing Bc6 followed by Bxa4, against which there is no visible defence. 41 Nc5 Raj 42 Kd3 Typical Karpov, re-establishing his blockade of Black's passed pawn before harvesting the booty. 42 ..• Rc7 43 Nxa4 Rcl 44 Nb6 Bg7 45 a4 Ral 46 Nd7+ Ke8 47 Nc5 Ke7 48 Kc2 Rfl 49 Nd3 Ral 50 Kb3 f5 51 Rb6 Bh6 52 Bd5 g5 53 Ra6 gxh4 54 gxh4 Rdl 55 Bc4 Rhl 56 a5 Rxh4 57 Bd5 Black resigns The game was now adjourned, Karpov sealing his 57th move. Kamsky resigned without resumption. Black will be unable to deal with the white queenside passed pawns.