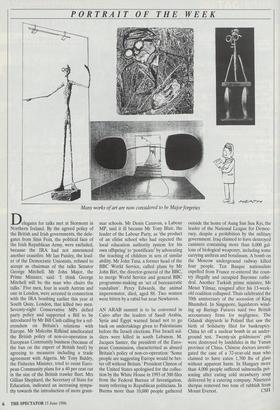 Many works of art are now considered to be Major forgeries Delegates for talks met at Stormont in Northern Ireland. By the agreed policy of the British and Irish governments, the dele- gates from Sinn Fein, the political face of the Irish Republican Army, were excluded, because the IRA had not announced another ceasefire. Mr Ian Paisley, the lead- er of the Democratic Unionists, refused to accept as chairman of the talks Senator George Mitchell. Mr John Major, the Prime Minister, said: 'I think George Mitchell will be the man who chairs the talks.' Five men, four in south Antrim and one in London, were arrested in connection with the IRA bombing earlier this year at South Quay, London, that killed two men. Seventy-eight Conservative MPs defied party policy and supported a Bill to be introduced by Mr Bill Cash calling for a ref- erendum on Britain's relations with Europe. Mr Malcolm Rifkind ameliorated the British policy of non-co-operation in European Community business (because of the ban on the export of British beef) by agreeing to measures including a trade agreement with Algeria. Mr Tony Baldry, the Fisheries Minister, tried to resist Euro- pean Community plans for a 40 per cent cut in the size of the British trawler fleet. Mrs Gillian Shephard, the Secretary of State for Education, indicated an increasing sympa- thy towards the introduction of more gram- mar schools. Mr Denis Canavan, a Labour MP, said it ill became Mr Tony Blair, the leader of the Labour Party, as 'the product of an elitist school who had rejected the local education authority system for his own offspring' to 'pontificate' by advocating the teaching of children in sets of similar ability. Mr John Tusa, a former head of the BBC World Service, called plans by Mr John Birt, the director-general of the BBC, to merge World Service and general BBC programme-making an 'act of bureaucratic vandalism'. Percy Edwards, the animal impersonator, died, aged 88. Two women were bitten by a rabid bat near Newhaven.

AN ARAB summit is to be convened in Cairo after the leaders of Saudi Arabia, Syria and Egypt warned Israel not to go back on undertakings given to Palestinians before the Israeli elections. Five Israeli sol- diers were killed in south Lebanon. M. Jacques Santer, the president of the Euro- pean Commission, characterised as absurd Britain's policy of non-co-operation: 'Some people are suggesting Europe would be bet- ter off without Britain.' President Clinton of the United States apologised for the collec- tion by the White House in 1993 of 300 files from the Federal Bureau of Investigation, many referring to Republican politicians. In Burma more than 10,000 people gathered outside the home of Aung San Suu Kyi, the leader of the National League for Democ- racy, despite a prohibition by the military government. Iraq claimed to have destroyed canisters containing more than 6,000 gal- lons of biological weaponry, including some carrying anthrax and botulinum. A bomb on the Moscow underground railway killed four people. Ten Basque nationalists expelled from France re-entered the coun- try illegally and occupied Bayonne cathe- dral. Another Turkish prime minister, Mr Mesut Yilmaz, resigned after his 13-week- old coalition collapsed. Thais celebrated the 50th anniversary of the accession of King Bhumibol. In Singapore, liquidators wind- ing up Barings Futures sued two British accountancy firms for negligence. The Gdansk shipyards in Poland that saw the birth of Solidarity filed for bankruptcy. China let off a nuclear bomb in an under- ground test. Twenty-six goldminers' pits were destroyed by landslides in the Yunan province of China. Chinese doctors investi- gated the case of a 32-year-old man who claimed to have eaten 1,700 lbs of glass without apparent harm. In Hungary more than 4,000 people suffered salmonella poi- soning after eating cold strawberry soup delivered by a catering company. Nineteen sherpas removed two tons of rubbish from