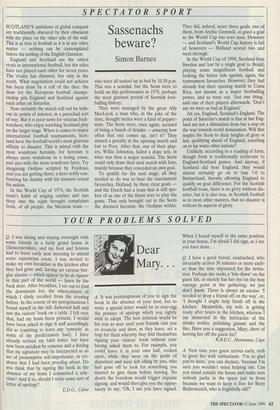 Q. I was dining and staying overnight with some friends in a fairly grand house in Gloucestershire, and my host and hostess had to leave early next morning to attend some equestrian event. I was invited to make my own breakfast in the kitchen after they had gone and, having set various bur- glar alarms — which appear to be de rigueur in that part of the world — leave by the back door. After breakfast, I set out to find the downstairs loo, the whereabouts of which I dimly recalled from the evening before. In the course of my peregrinations I found myself in the still darkened hall and saw the visitors' book on a table. I felt sure that, had my hosts been present, I would have been asked to sign it and accordingly did so (omitting to leave any 'remarks' as some of my predecessors had). I have already written my b&b letter, but have now been stricken by remorse and a feeling that my signature may be interpreted as an act of presumptive self-importance, or evi- dence that I had been prowling about. Do you think that by signing the book in the absence of my hosts I committed a sole- cism? And if so, should I write some sort of letter of apology? E.D.G., Caine A. It was presumptuous of you to sign the book in the absence of your host, but to write a special letter would be to over-egg the posture of apology which you rightly wish to adopt. The best solution would be for you to wait until your friends visit you en revanche and then, as they leave, set a trap for them whereby they find themselves signing your visitors' book without your having asked them to. For example, you could leave it in your own hall, cocked open, while they were on the point of departure and were left idling by you, who had gone off to look for something you wanted to give them before leaving. No doubt the boredom would trigger impulse signing and would then give you the oppor- tunity to say, 'Oh, I see you have signed. When I found myself in the same position in your house, I'm afraid I did sign, as I see you have done. . . . '

Q. I have a good friend, unattached, who invariably arrives 30 minutes or more earli- er than the time stipulated for the invita- tion. Perhaps she seeks a low-down' on the guest list, or merely has her eye on the best vantage point at the gathering; we just don't know. There is always an excuse: 'I needed to drop a friend off on the way', or, `I thought I might help finish off in the kitchen.' Meanwhile, my wife is getting ready after hours in the kitchen, whereas I am immersed in the intricacies of the drinks trolley, polishing glasses and the like. Have you a suggestion, Mary, short of leaving her off the guest list?

R.B.E.C., Hermanus, Cape A. Next time your guest arrives early, rush to greet her with enthusiasm. 'I'm so glad you're here,' you can declare, 'because I'm sure you wouldn't mind helping out. Can you stand outside the house and make sure nobody parks in the space just in front because we want to keep it free for Betty Butterscotch, who is frightfully old?'