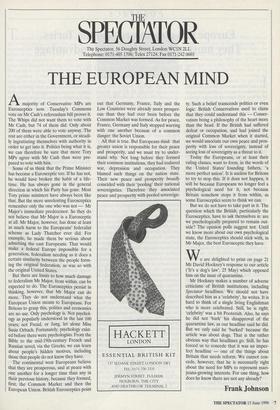 Amajority of Conservative MPs are Eurosceptics now. Tuesday's Commons vote on Mr Cash's referendum bill proves it. The Whips did not want them to vote with Mr Cash, but 74 of them did. Only about 200 of them were able to vote anyway. The rest are either in the Government, or steadi- ly ingratiating themselves with authority in order to get into it. Politics being what it is, we can therefore be sure that more Tory MPs agree with Mr Cash than were pre- pared to vote with him.

Some of us think that the Prime Minister has become a Eurosceptic too. If he has not, he would have broken the habit of a life- time. He has always gone in the general direction in which his Party has gone. Most Tory prime ministers have always been like that. But the more unrelenting Eurosceptics remember only the one who was not — Mr Major's immediate predecessor. So they do not believe that Mr Major is a Eurosceptic at all. Mr Major, however, has done at least as much harm to the Europeans' federalist scheme as Lady Thatcher ever did. For example, he made them be serious about admitting the east Europeans. That would make a federal Europe impossible for a generation, federalism needing as it does a certain similarity between the people form- ing the original federation, as was so with the original United States.

But there are limits to how much damage to federalism Mr Major, from within, can be expected to do. The Eurosceptics persist in thinking, however, that Mr Major can do more. They do not understand what the European Union means to Europeans. For Britons to grasp this, politics and economics are no use. Only psychology is. Not psychol- ogy as popularly understood in the last 100 years; not Freud, or Jung, let alone Miss Susie Orbach. Fortunately, psychology exist- ed before there were psychologists. From the Bible to the mid-19th-century French and Russian novel, via the Greeks, we can learn about people's hidden motives, including those that people do not know they have. The continental west Europeans believe that they are prosperous, and at peace with one another for a longer time than any in their previous history, because they formed, first, the Common Market and then the European Union. British Eurosceptics point out that Germany, France, Italy and the Low Countries were already more prosper- ous than they had ever been before the Common Market was formed. As for peace, France, Germany and Italy stopped warring with one another because of a common danger: the Soviet Union.

All that is true. But Europeans think that . greater union is responsible for their peace and prosperity, and we must try to under- stand why. Not long before they formed their common institutions, they had endured war, depression and occupation. They blamed such things on the nation state. Their new peace and prosperity broadly coincided with their `pooling' their national sovereignties. Therefore they associated peace and prosperity with pooled sovereign- ty. Such a belief transcends politics or even logic. British Conservatives used to claim that they could understand this — Conser- vatism being a philosophy of the heart more than the head. If the British had suffered defeat or occupation, and had joined the original Common Market when it started, we would associate our own peace and pros- perity with loss of sovereignty, instead of seeing loss of sovereignty as a threat to it.

Today the Europeans, or at least their ruling classes, want to form, in the words of the United States' founding fathers, 'a more perfect union'. It is useless for Britons to try to stop this. If it does not happen, it will be because Europeans no longer feel a psychological need for it, not because Britain somehow stops it from within, as some Eurosceptics seem to think we can.

But we do not have to take part in it. The question which the British, particularly the Eurosceptics, have to ask themselves is: are we psychologically prepared to remain out- side? The opinion polls suggest not. Until we know more about our own psychological state, the Eurosceptics should stick with, in Mr Major, the best Eurosceptic they have.

We are delighted to print on page 21 Mr David Hockney's response to our article (`It's a dog's law', 25 May) which opposed him on the issue of quarantine.

Mr Hockney makes a number of adverse criticisms of British institutions, including Spectator headlines. We should not have described him as a `celebrity', he writes. It is hard to think of a single living Englishman who is more celebrated. Still, he is right; `celebrity' was a bit Pooterish. Also, he says he did not `bark' his disapproval of the quarantine law, as our headline said he did. But we only said he 'barked' because the article was about dogs. That is the rather obvious way that headlines go. Still, he has forced us to concede that it was an imper- fect headline — one of the things about Britain that needs reform. We cannot con- cede, however, that he is necessarily right about the need for MPs to represent mari- juana-growing interests. For one thing, how does he know there are not any already?