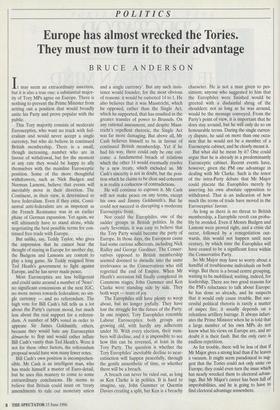 Europe has almost wrecked the Tories.

They must now turn it to their advantage

It may seem an extraordinary assertion, but it is also a true one: a substantial major- ity of Tory MPs agree on Europe. There is nothing to prevent the Prime Minister from setting out a position that would broadly unite his Party and prove popular with the public.

This Tory majority consists of moderate Eurosceptics, who want no truck with fed- eralism and would never accept a single currency, but who do believe in continued British membership. There is a small, though increasing, number who are in favour of withdrawal, but for the moment at any rate they would be happy to ally themselves with the mainline Eurosceptic position. Some of the more thoughtful withdrawers, such as Nick Budgen and Norman Lamont, believe that events will inevitably move in their direction. The Continent, in their view, is determined to have federalism. Even if they exist, Conti- nental anti-federalists are as impotent as the French Resistance was in an earlier phase of German expansion. Yet again, we will ultimately have to stand alone, while negotiating the best possible terms for con- tinued free trade with Europe.

But unlike, say, Teddy Taylor, who gives the impression that he cannot bear the thought of staying in Europe for another day, the Budgens and Latnonts are content to play a long game. Sir Teddy resigned from Ted Heath's government to fight against Europe, and he has never made peace.

Most Eurosceptics are less belligerent and could unite around a number of 'Noes': no significant concessions at the next IGC; no more moves towards federalism; no sin- gle currency — and no referendum. The high vote for Bill Cash's bill tells us a lot about the Party's current mood, but much less about the real support for a referen- dum. A number of MPs voted in order to appease Sir James Goldsmith; others, because they would hate any Eurosceptics demarche to flop and would rather inflate Bill Cash's vanity than Ted Heath's. Were it not for these other factors, the referendum proposal would have won many fewer votes.

Bill Cash's own position is incomprehen- sible. Mr Cash is an intelligent man, who has made himself a master of Euro-detail, but he uses this mastery to come to some extraordinary conclusions. He seems to believe that Britain could insist on 'treaty amendments to rule out monetary union and a single currency'. But any such insis- tence would founder, for the most obvious of reasons: it would be outvoted 14 to 1. He also believes that it was Maastricht, which he opposed, rather than the Single Act, which he supported, that has resulted in the greater transfer of power to Brussels. On any rational assessment, and despite Maas- tricht's repellent rhetoric, the Single Act was far more damaging. But above all, Mr Cash believes himself to be in favour of continued British membership. Yet if he had his way, there could only be one out- come: a fundamental breach of relations which the other 14 would eventually resolve by a new treaty, which excluded us. Mr Cash's sincerity is not in doubt, but the posi- tion which he claims to be clear and coherent is in reality a corkscrew of contradictions.

He will continue to espouse it. Mr Cash will not make peace on any terms, except his own and Jimmy Goldsmith's. But he could not succeed in disrupting a moderate Eurosceptic front.

Nor could the Europhiles, one of the sadder groups in British politics. In the early Seventies, it was easy to believe that the Tory Party would become the party of Europe. In those days, the European cause had some curious adherents, including Nick Ridley and George Gardiner. The Conser- vatives opposed to British membership seemed doomed to dwindle into the same irrelevance as the Conservatives who still regretted the end of Empire. When Mr Heath's accession bill finally completed its Commons stages, John Gummer and Ken Clarke were standing side by side. They both wept — tears of joy.

The Europhiles still have plenty to weep about, but no longer joyfully. They have lost the struggle for the future of the Party. In one respect, Tory Europhiles resemble Labour Eurosceptics: both groups are growing old, with hardly any adherents under 50. With every election, their num- bers will decline, and it is impossible to see how this can be reversed, at least in the Tory Party. The question is whether the Tory Europhiles' inevitable decline to near- extinction will happen peacefully, through the gentle anaesthetic of time, or whether there will be a breach.

A breach can never be ruled out, as long as Ken Clarke is in politics. It is hard to imagine, say, John Gummer or Quentin Davies creating a split, but Ken is a breachy character. He is not a man given to pes- simism; anyone who suggested to him that the Europhiles were finished would be greeted with a disdainful shrug of the shoulders: not as long as he was around, would be the message conveyed. From the Party's point of view, it is important that he does stay around, but he will only do so on honourable terms. During the single curren- cy dispute, he said on more than one occa- sion that he would not be a member of a Eurosceptic cabinet, and he clearly meant it.

But what did he mean by it? One could argue that he is already in a predominantly Eurosceptic cabinet. Recent events have, however, given the PM one advantage in dealing with Mr Clarke. Such is the tenor of the intra-Party debate that Mr Major could placate the Europhiles merely by asserting his own absolute opposition to withdrawal. That is an indication of how much the terms of trade have moved in the Eurosceptics' favour.

As long as there is no threat to British membership, a Europhile revolt can proba- bly be avoided. Even if Messrs Budgen and Lamont were proved right, and a crisis did occur, followed by a renegotiation out- wards, this would not happen until next century, by which time the Europhiles will have ceased to be a significant force within the Conservative Party.

So Mr Major may have to worry about a handful of troublesome individuals on both wings. But there is a broad centre grouping, waiting to be mobilised; waiting, indeed, for leadership. There are two good reasons for the PM's reluctance to talk about Europe: he has done so already, and he suspects that it would only cause trouble. But suc- cessful political rhetoric is rarely a matter of sniper fire; it usually depends on a relentless artillery barrage. It always infuri- ates the Prime Minister when he is told that a large number of his own MPs do not know what his views on Europe are, and no doubt it is their fault. But the only cure is endless repetition. As for trouble, there will be less of that if Mr Major gives a strong lead than if he leaves a vacuum. It might seem paradoxical to sug- gest that the Tories could not only unite on Europe; they could even turn the issue which has nearly wrecked them to electoral advan- tage. But Mr Major's career has been full of improbabilities, and he is going to have to find electoral advantage somewhere.