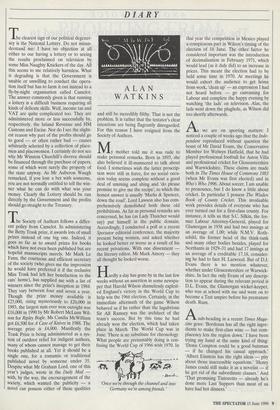 ALAN WATKINS he clearest sign of our political degener- acy is the National Lottery. Do not misun- derstand me: I have no objection at all either to our having a lottery or to seeing the results proclaimed on television by some Miss Naughty Knickers of the day. All this seems to me relatively harmless. What is degrading is that the Government is unable or unwilling to conduct the opera- tion itself but has to farm it out instead to a fly-by-night organisation called Camelot. The answer commonly given is that running a lottery is a difficult business requiring all kinds of delicate skills. Well, income tax and VAT are quite complicated too. They are administered more or less successfully by, respectively, the Inland Revenue and HM Customs and Excise. Nor do I see the slight- est reason why part of the profits should go to good — or often rather bad — causes arbitrarily selected by a collection of place- men and placewomen. I certainly do not see why Mr Winston Churchill's divorce should be financed through the purchase of papers, some of which were surely the property of the state anyway. As Mr Auberon Waugh remarked, if you lose a bet with someone, you are not normally entitled to tell the win- ner what he can do with what was your money. Clearly the Lottery should be run directly by the Government and the profits should go straight to the Treasury.

The Society of Authors follows a differ- ent policy from Camelot. In administering the Betty Trask prize, it awards lots of small prizes instead of one big one. Indeed, it goes so far as to award prizes for books which have not even been published but are hopeful manuscripts merely. Mr Mark Le Fanu, the courteous and efficient secretary of the society (who gives me the impression he would have preferred it if the reclusive Miss Trask had left her benefaction to the cats' home), has supplied me with a list of winners since the prize's inception in 1984. They vary between four and seven a year. Though the prize money available is £25,000, rising mysteriously to £26,000 in 1993, the largest sum ever won outright was £16,000 in 1990 by Mr Robert McLiam Wil- son for Ripley Bogle. Ms Candia McWilliam got £6,500 for A Case of Knives in 1988. The average prize is £4,000. Manifestly the Trask Prize is being administered as a sys- tem of outdoor relief for indigent authors, many of whom cannot manage to get their books published at all. Yet it should be a single one, for a romantic or traditional published novel by someone under 35. Despite what Mr Graham Lord, one of this year's judges, wrote in the Daily Mail with, by the way, the encouragement of the society, which wanted the publicity — a novel can possess either of these qualities and still be incredibly filthy. That is not the problem. It is rather that the testator's clear intentions are being flagrantly disregarded. For this reason I have resigned from the Society of Authors.

My mother told me it was rude to make personal remarks. Born in 1893, she also believed it ill-mannered to talk about food. I sometimes wish the latter proscrip- tion were still in force, for no social occa- sion today seems complete without a good deal of umming and ahing and 'do please promise to give me the recipe', to which the honest answer is usually 'Marks & Spencer, down the road'. Lord Lawson also has com- prehensively demolished both these old prohibitions. As far as personal remarks are concerned, he has (as Lady Thatcher would say) put himself in the public domain. Accordingly, I conducted a poll at a recent Spectator editorial conference, the majority present being women, and asked whether he looked better or worse as a result of his recent privations. With one dissentient the literary editor, Mr Mark Amory — they all thought he looked worse.

Hardly a day has gone by in the last few weeks without an assertion in some newspa- per that Harold Wilson shamelessly exploit- ed England's victory in the World Cup to help win the 1966 election. Certainly, in the immediate aftermath of the game Wilson behaved as if he rather than the lugubrious Sir All Ramsey was the architect of the team's success. But by this time he had already won the election, which had taken place in March. The World Cup was in June. There is no substitute for chronology. What people are presumably doing is con- fusing the World Cup of 1966 with 1970. In `Once were through the chunnel and into Germany we're among friends.' that year the competition in Mexico played a conspicuous part in Wilson's timing of the election of 18 June. The other factor he considered important was the introduction of decimalisation in February 1971, which would lead (as it duly did) to an increase in prices. This meant the election had to be held some time in 1970. At meetings he would exhort the audience to get home from work, 'clean up' — an expression I had not heard before — go canvassing for Labour and complete the happy evening by watching 'the lads' on television. Alas, the lads went down the plughole, as Wilson did too shortly afterwards.

As we are on sporting matters: I noticed a couple of weeks ago that the Inde- pendent reproduced without question the boast of Mr David Evans, the Conservative Member for Welwyn Hatfield, that he had played professional football for Aston Villa and professional cricket for Gloucestershire and Warwickshire. These claims are made both in The Times House of Commons 1983 (when Mr Evans was first elected) and in Who's Who 1996. About soccer, I am unable to pronounce, but I do know a little about cricket. In particular I possess The Wisden Book of County Cricket. This invaluable work provides details of everyone who has ever turned out for a first-class county. For instance, it tells us that S.C. Silkin, the for- mer Labour Attorney-General, played for Glamorgan in 1938 and had two innings at an average of 1.00; while N.M.V. Roth- schild, the former head of the think-tank and many other bodies besides, played for Northants in 1929-31 and had 17 innings at an average of a creditable 17.18, consider- ing he had to face H. Larwood. But of D.J. Evans there is no mention whatever, whether under Gloucestershire or Warwick- shire. In fact the only Evans of any descrip- tion to appear during the relevant period is D.L. Evans, the Glamorgan wicket-keeper, who was at school with me and went on to become a Test umpire before his premature death. Rum.

Asub-heading in a recent Times Maga- zine goes: 'Bordeaux has all the right ingre- dients to make first-class wine — but com- placency lets the region down.' I have been trying my hand at the same kind of thing: `Denis Compton could be a good batsman — if he changed his casual approach.' `Albert Einstein has the right ideas — pity about those inaccessible equations.' Henry James could still make it as a novelist — if he got rid of the subordinate clauses.' And `That promising Tintoretto — already he's done more Last Suppers than most of us have had hot dinners.'