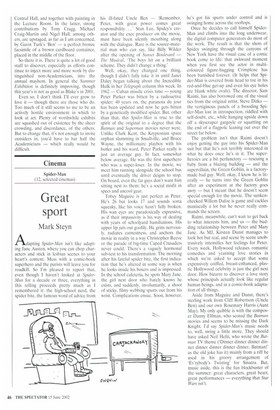 Adapting Spider-Man isn't like adapting Jane Austen, where you can chop characters and stick in lesbian scenes to your heart's content. Mess with a comic-book superhero and the purists will leave you for roadkill. So I'm pleased to report that, even though I haven't looked at SpiderMan for a decade or three, everything in this telling proceeds pretty much as I remembered it: the high-school nerd, the spider bite, the famous word of advice from

his ill-fated Uncle Ben — 'Remember, Peter, with great power comes great responsibility ... ' Stan Lee, Spidey's creator and the exec producer on the movie, must have been silently mouthing along with the dialogue. Rare is the source-material man who can say, like Billy Wilder after the opening of Sunset Boulevard — The Musical, The boys hit on a brilliant scheme. They didn't change a thing.'

Well, okay, they changed one thing, though I didn't fully take it in until Janet Daley began talking about the Incredible Hulk in her Telegraph column this week. In 1962 — Cuban missile crisis time — young Peter Parker was bitten by a radioactive spider: 40 years on, the paranoia du jour has been updated and now he gets bitten by a genetically modified spider. But, other than that, this Spider-Man is true to the spirit of the original to a degree that the Batman and Superman movies never were. Unlike Clark Kent, the Kryptonian space orphan slumming in Smallville, and Bruce Wayne, the millionaire playboy with his butler and his ward, Peter Parker really is just an average guy. In fact, somewhat below average. He was the first superhero who was a super-loser. In the movie, we meet him running alongside the school bus until eventually the driver deigns to stop. On board, even the fat guys don't want him sitting next to them: he's a social misfit in specs and uncool gear.

Tobey Maguire is just perfect as Peter. He's 26 but looks 17 and sounds sorta squeaky, like his voice hasn't fully broken. His wan eyes are paradoxically expressive, as if their impassivity is his way of dealing with years of schoolyard humiliations. His upper lip juts out goofily. He grins nervously, radiates earnestness, and anchors the movie in reality in a way Christopher Reeve or the parade of big-time Caped Crusaders never could. There's a vaguely hormonal sub-text to his transformation, The morning after his fateful spider bite, the first indication that he's altered in some way is when he looks inside his boxers and is impressed. In the school cafeteria, he spots Mary Jane, the girl next door who barely knows he exists, and suddenly, involuntarily, a shoot of sticky, filmy webbing spurts out from his wrist. Complications ensue. Soon, however, he's got his spurts under control and is swinging home across the rooftops.

Once he decides to call himself SpiderMan and climbs into the long underwear, the digital computer generators do most of the work. The result is that the shots of Spidey swinging through the canyons of New York have the visual ease of a comic book come to life: that awkward moment when you first see the actor in multicoloured figure-hugging Crimplene has been banished forever. (It helps that Spider-Man is covered from head to toe in his red-and-blue get-up and even his eye holes are blank white ovals). The director, Sam Raimi, has also borrowed one of the visual tics from the original artist, Steve Ditko — the vertiginous panels of a brooding Spider-Man lost in introspection, riddled with self-doubt, etc., while hanging upside down off a skyscraper gargoyle or squatting on the end of a flagpole leaning out over the street far below.

The problem isn't that Raimi doesn't enjoy getting the guy into his Spider-Man suit but that he's not terribly interested in what he does once he's in it. The superheroics are a bit perfunctory — rescuing a baby from a blazing building — and the supervillain, the Green Goblin, is a factorymade bad guy. Well, okay, I know he is literally — he turns into the Green Goblin after an experiment at the factory goes awry — but I meant that he doesn't seem special enough for the movie. The sunkenchecked Willem Dafoe is game and cackles maniacally a lot but he never really commands the screen.

Raimi, meanwhile, can't wait to get back to what interests him, and us — the budding relationship between Peter and Mary Jane. As MJ, Kirsten Dunst manages to look hot but real, and scene by scene unobtrusively intensifies her feelings for Peter. Every week, Hollywood releases romantic comedies and yearning love stories in which we're asked to accept that some expensively coiffed, breast-enhanced, plastic Hollywood celebrity is just the girl next door, How bizarre to discover a love story whose principals actually look like regular human beings, and in a comic-book adaptation of all things.

Aside from Maguire and Dunst, there's sterling work from Cliff Robertson (Uncle Ben) and our own Rosemary Harris (Aunt May). My only quibble is with the composer Danny Elfman, who scored the Batman movies and seems to be missing the Dark Knight. I'd say Spider-Man's music needs to, well, swing a little more. They should have asked Neil Hefti, who wrote the Batman TV theme (`Dinner dinner dinner dinner dinner dinner dinner dinner, Batman!' as the old joke has it) mainly from a riff he used in his groovy arrangement of `Ev'rybody's Twisting' for Sinatra. But, music aside, this is the fun blockbuster of the summer: great characters, great heart, great performances — everything that Star Wars isn't.