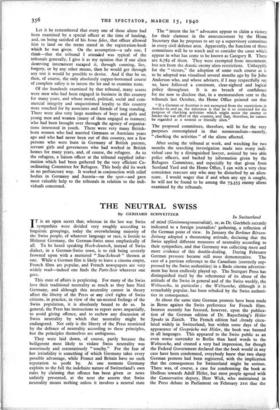 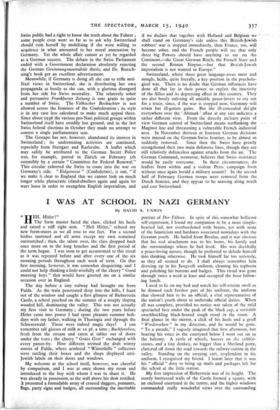 In Switzerland IT is an open secret that, whereas in the last war Swiss sympathies were divided very roughly according to linguistic groupings, today the overwhelming majority of the Swiss people, of whatever language or race, is hostile to Hitlerist Germany, the German-Swiss most emphatically of all. To be heard speaking Hoch-deutsch, instead of Swiss dialect, in a German-Swiss town, is to risk being severely frowned upon with a muttered " Sau-Schwab " thrown at one. While a German film is likely to leave a cinema empty, French films are popular, and French newspapers are very widely read—indeed one finds the Paris-Soir wherever one goes.

This state of affairs is perplexing. For many of the Swiss love their traditional neutrality as much as they hate Nazi Germany, and although this neutrality cannot in theory affect the liberty of the Press or any civil rights of Swiss citizens, in practice, in view of the un-neutral feelings of the Swiss population, it is absolutely bound to do so. In general, the Press has instructions to report news impartially, to avoid giving offence, and to eschew any discussion of Swiss neutrality by which that neutrality might be endangered. Not only is the liberty of the Press restricted by the defence of neutrality according to these principles, but the principles themselves are ambiguous.

They were laid down, of course, partly because the belligerent most likely to violate Swiss neutrality was notoriously and ostentatiously " touchy." For the fear of her irritability is something of which Germany takes every possible advantage, while France and Britain have no such reputation to profit by. At one moment Germany exploits to the full the indefinite nature of Switzerland's own rules by claiming that offence has been given or news unfairly presented, at the next she asserts that Swiss neutrality means nothing unless it involves a neutral state of mind (Gesinnungsneutralitat), or, as Dr. Goebbels recently indicated to a foreign journalists' gathering, a reflection of the German point of view. In January the Berliner Borsen- Zeitung adopted a threatening attitude, declaring that the Swiss applied different measures of neutrality according to their sympathies, and that Germany was collecting more and more evidence of this double-dealing. During February German pressure became still more demonstrative. The case of a partisan reference to the Canadians (correctly sup- pressed by the Swiss authorities) in a Basle cinema advertise- ment has been endlessly played up. The Stuttgart Press has distinguished itself by the vehemence of its abuse of the attitude of the Swiss in general and of the Swiss weekly, the Weltwoche, in particular ; the Weltwoche, although it is remarkably popular, has been rebuked by the Swiss authori- ties in consequence.

At about the same time German protests have been made in Berne against the Swiss preference for French films. Interest recently has focused, however, upon the publica- tion of the German edition of Dr. Rauschning's Hitler Speaks in Zurich. The French edition had already circu- lated widely in Switzerland, but within some days of the appearance of Gespritche mit Hitler, the book was banned in all languages. This appeared to the Swiss public as an even worse surrender to Berlin than hard words to the Weltwoche, and created a very bad impression, for though the Federal Government declared that the book would in any case have been condemned, everybody knew that two sharp German protests had been registered, with the implication that the consequences for Switzerland might be serious. There was, of course, a case for condemning the book as libellous towards Adolf Hitler, but most people agreed with the Conservative deputy, Herr Wick, who maintained in the Press debate in Parliament on February 21st that the Swiss public had a right to know the truth about the Fiihrer ; some -people even- went so far as to ask why Switzerland should ruin herself by mobilising if she were willing to acquiesce in what amounted to her moral annexation by Germany Yet the whole affair cannot as yet be regarded as a German success. The debate in the Swiss Parliament ended with a Government declaration absolutely rejecting the German Gesinnungsneutralitdt thesis, and Dr. Rausch- ning's book got an excellent advertisement.

Meanwhile, if Germany is doing all she can to stifle anti- Nazi views in Switzerland, she is distributing her own propaganda as busily as she can, with a glorious disregard from her side for Swiss neutrality. The relatively sober and persuasive Frankfurter Zeitung is sent gratis to quite a number of Swiss. The Volkischer Beobachter is not allowed across the frontiers of the Confederation ; its style is in any case less calculated to make much appeal there. Since about 1936 the various pro-Nazi political groups within Switzerland itself have steadily lost ground, and in the last Swiss federal elections in October they made no attempt to contest a single parliamentary seat.

The Gestapo has not, however, abandoned its interest in Switzerland ; its undermining activities are continued, especially from Stuttgart and Karlsruhe. A leaflet which may safely be attributed to the German Secret Police was, for example, posted in Zurich on February 5th ostensibly by a certain " Committee for Federal Renewal." This circular exhorted the Swiss to come into the war on Germany's side. "Eidgenosse " (Confederate), it ran, " if we make it clear to England that we cannot look on much longer while plutocratic island-dwellers again and again let wars loose in order to strengthen English imperialism, and if we declare that together with Holland and Belgium we shall stand on Germany's side unless this British Jewish' robbers' war is stopped immediately, then France, too, will ' become sober, and the French people will see that only three big Powers should have anything to say on the Continent,—the Great German Reich, the French State- and the second Roman Empire,—but that British-Jewish imperialism is not wanted in Europe."

Switzerland, where three great language-areas meet and mingle, holds, quite literally, a key position in the psycholo- gical war. There is no doubt that German influences have done all that lay in their power to exploit the inactivity of the Allies and its depressing effect in this country. They are also busily enlisting all amiable peace-lovers to cry out for a truce, since, if the war is stopped now, Germany will retain her ill-gotten gains. But the ill-concealed der ght everywhere over the Altmark ' affair at any rate indicates a rather different view. From the directly military point of view German control of Switzerland means outflanking the Maginot line and threatening a vulnerable French industrial area. In November thirteen or fourteen German divisions were massed on the German-Swiss frontier, to be almost as suddenly removed. Since then the Swiss have greatly strengthened their two main defensive lines, though they are still relatively defenceless against attacks from the air. The German Command, moreover, believes that Swiss resistance would be easily overcome. In these circumstances, do leaflets from within and a violent Press campaign from without once again herald a military assault? In the second half of February German troops were removed from the Dutch frontier, and they appear to be massing along north and east Switzerland.