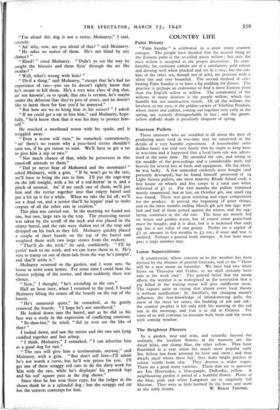 A countryman, whose concern as to the weather has been revived by the absence of general forecasts, said CO me " There will be a new moon on Saturday. We have had two white frosts on Thursday and Friday, so we shall certainly have rain at the week end." The general belief that the moon affects the weather is as widespread as the conviction that a pig killed in the waning moon will give indifferent meat. The experts unite in saying that almost every local theory is without justification : St. Swithin's, the changing moon's influence, the fore-knowledge of inland-moving gulls, the curse of the three ice saints, the budding of ash and oak : the country prophet is left only with his warning of the red sun in the morning; and fiat is as old as Genesis. Yet some of us will continue to associate both birds and the moon with coming weather.