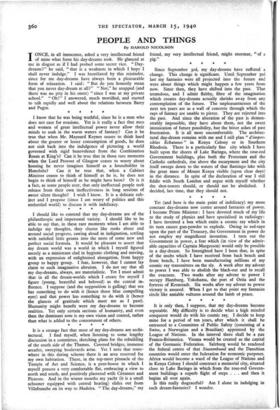 It is only then, I suppose, that my day-dreams become

reputable: My difficulty is to decide what a high minded conqueror would do with his cosmic ray, I decide to keep mine for a period of ten years, after which it shall be entrusted to a Committee of Public Safety (consisting of a Swiss, a Norwegian and a Brazilian) appointed by the League of Nations. In the interval there shall be a pax Franco-Britannica. Vienna would be created as the capital of the Germanic Federation. Salzburg would be rendered the federal centre of that Staatenbund and the Danubian countries would enter the federation for economic purposes. Africa would become a ward of the League of Nations and in Kenya Colony I should construct a memorial city, situated close to Lake Baringo in which from the rose-red Govern- ment buildings a superb flight of steps . . . and then it begins all over again.

Is this really disgraceful? Am I alone in indulging in such dream-fantasies? I wonder.