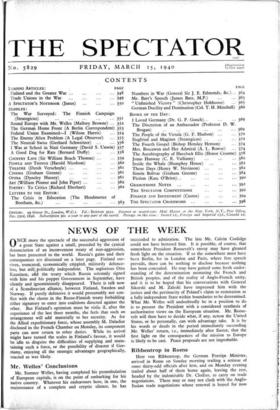 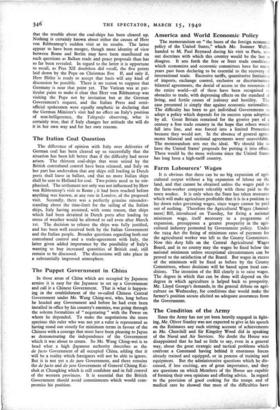 Herr von Ribbentrop, the German Foreign Minister, arrived in Rome on Sunday morning trailing a retinue of some thirty-odd officials after him, and on Monday evening trailed about half of them home again, leaving the rest, headed by the indomitable Dr. Clodius, to carry on trade negotiations. These may or may not clash with. the Anglo- Italian trade negotiations whose renewal is hoped for now that the trouble about the coal-ships has been cleared up. Nothing is certainly known about either the causes of Herr von Ribbentrop's sudden visit or its results. The latter appear to have been meagre, though more identity of view between Rome and Berlin may have been manifested on such questions as Balkan trade and peace proposals than has so far been revealed. In regard to the latter it is opportune to recall, as Pius XII doubtless did recall, the five points laid down by the Pope on Christmas Eve. If, and only if, Herr Hitler is ready to accept that basis will any kind of discussion be possible. There is no reason to suppose that Germany is near that point yet. The Vatican was at par- ticular pains to make it clear that Herr von Ribbentrop was visiting the Pope not by invitation but at the German Government's request, and the Italian Press and semi- official spokesmen were equally emphatic in declaring that the German Minister's visit had no effect on Italy's position of non-belligerence, the Telegrafo observing, what is certainly true, that if Italy changes her attitude she will do it in her own way and for her own reasons.