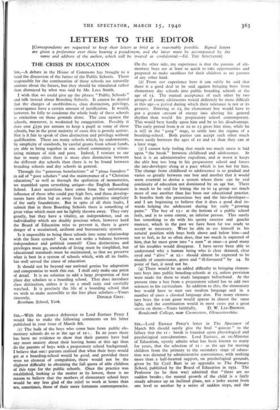 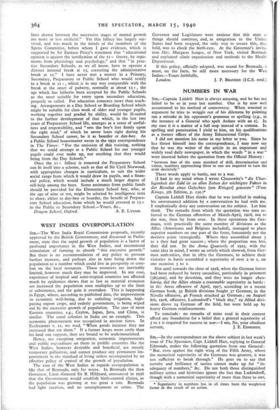 Stn,—Lord Eustace Percy's letter in The Spectator of March 8th

should surely give the final " quietus " to the fallacy that the t t + break is founded upon physiological and psychological considerations. Lord Eustace, an ex-Minister of Education, openly admits what has been known to many for years, that the selection of ix+ as the age for moving children from the primary to the secondary stage of educa- tion was dictated by administrative convenience, with nothing more than a half-hearted support, on psychological grounds, given by Sir Cyril Burt in an appendix to The Primary School, published by the Board of Education in 1931. The Professor (as he then was) admitted that " there arc no sudden breaks ; the mental growth of the child is a fairly steady advance up an inclined plane, not a jerky ascent from one level to another by a series of sudden steps, and the

lines drawn between the successive stages of mental growth are more or less artificial." Yet this fallacy has largely sur- vived, and was much in the minds of the members of the Spens Committee, before whom I gave evidence, which is supported by Sir Eustace Percy's statement that " educational opinion is against the justification of the II + theory, by argu- ments from physiology and psychology," and that " in prac- tice Secondary Schools, as we all know, have to operate a distinct internal break at 13, correcting the administrative

break at I have never met a master in a Primary, Secondary, Preparatory or Public School who would testify to a break at I I +, which is in any way comparable with the break at the onset of puberty, normally at about 13+, the age which has hitherto been accepted by the Public Schools as the most suitable for entry upon secondary education, properly so called. For education connotes more than teach- ing. Arrangements in a Day School or Boarding School which might be suitable for class work of older and younger pupils, working together and graded by ability, would be ill-suited to the further development of that which, in the last two years of Preparatory School life, emerges as a sense of useful- ness and responsibility, and " sets the boy's feet firmly upon the right road," of which he never loses sight during his Secondary School career, be it as boarder or day-boy. As a Public School housemaster wrote in the 1931 correspondence in The Times: " For the omission of this training, nothing that we could attempt at a Public School for our younger pupils could ever make up, nor anything that they would bring from the Day Schools."

Once the 1 I + fallacy is removed the Preparatory School can fit itself into a scheme, such as that of Sir Cyril Norwood, with appropriate changes in curriculum, to suit the wider social range from which it would draw its pupils, and a finan- cial policy, which would include a much larger degree of self-help among the boys. Some assistance from public funds should be provided for the Elementary School boy, who, at the age of nine or ten, might be selected by intelligence tests to share, either as day-boy or boarder, the benefit of Prepara- tory School education, from which he would proceed at 13+ to the Public or Secondary School.—Yours, &c.,