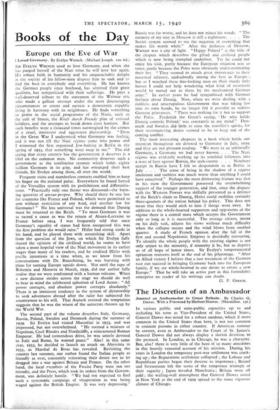 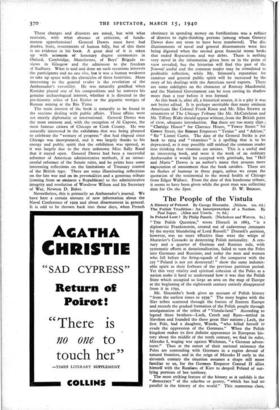 The Discretion of an Ambassador

IN various public and semi-public capacities up to and including his term as Vice-President of the United States, General Dawes was-noted for a robust candour, which if more common in the United States than here, is not too common in eminent persons in either country. If American rumour be correct, even as Ambassador to the Court of St. James's General Dawes did not always display a slavish devotion to the protocol. In London, as in Chicago, he was a character. But, alas! there is very little of the hero of so many anecdotes in this heavily veneered account of his mission. During his years in London the temporary post-war settlement was crack- ing up ; the Reparations settlement collapsed ; the Labour and Republican parties began their descent to impotence ; Briand and Stresemann left the scene of the temporary triumph of their sagacity ; Japan invaded Manchuria ; Britain went off gold ; the wailing-wall atmosphere that General Dawes noted in New York at the end of 1929 spread to the more vigorous climate of Chicago.

These changes and disasters are noted, but with what restraint, with what absence of criticism, of funda- mental apprehension! General Dawes must have had doubts, fears, resentments of human folly, but of this there is no evidence in his book. A great deal of it is taken up with acasants of honorary degree ceremonies in Oxford, Cambridge, Manchester, of Boys' Brigade re- views in Glasgow and the admission to the freedom of Sudbury. What is said and done on such occasions interests the participants and no one else, but it was a human weakness to take up space with the chronicles of these festivities. More interesting to the general reader is the revelation of the Ambassador's versatility. He was naturally gratified when Kreisler played one of his compositions and he conveys his genuine archaeological interest, whether it is directed to the pre-historic relics of Les Eyzies or the gigantic vestiges of Roman mining at the Rio Tinto.

The main interest of the book is naturally to be found in the sections dealing with public affairs. Those affairs were not merely diplomatic or international. General Dawes was the most eminent and, with the exception of Al Capone, the most famous citizen of Chicago or Cook County. He was naturally interested in the exhibition that was being planned to celebrate the "century of progress " that had elapsed since Chicago was incorporated, and it was largely thanks to his energy and public spirit that the exhibition was opened, as it was largely due to the then unknown Miss Sally Rand that it stayed open. General Dawes had been a successful reformer of American administrative methods, if an unsuc- cessful reformer of the Senate rules, and he prints here some interesting reflections on the limitations of Treasury control of the British type. There are some illuminating reflections on the late war and on its personalities and a generous tribute (coming from se eminent a Republican) to the administrative integrity and resolution of Woodrow Wilson and his Secretary of War, Newton D. Baker.

Nevertheless, this is primarily an Ambassador's journal. We have here a certain amount of new information about the Naval Conference of 1929 and about disarmament in general. It is odd to be thrown back into those days, when French obstinacy in spending money on fortifications was a subject of distress to right-thinking persons (among whom General Dawes does not seem to have been numbered). The dis- illusionments of naval and general disarmament were just being digested when the second great financial storm broke that ended Reparations and war debts. There is nothing very novel in the information given here or in the point of view revealed, but the historian will find this part of the journal useful and the common reader may be stimulated to profitable reflection, while Mr. Stimson's reputation for candour and general public spirit will be increased by the story of his dealings with the American naval experts. There are some sidelights on the character of Ramsay Macdonald, and the National Government can be seen casting its shadow more than a year before it was formed.

As this book is, after all, a historical source, it is a pity it was not better edited. It is perhaps inevitable that many eminent Americans like Colonel Frank Knox and Mr. Silas Strewn or ornaments of The Chicago Tribune like Mr. McCutcheon and Mr. Tiffany Blake should appear without, from the British point of view, adequate introduction. Bin there are too many slips ; "-Claridge House" for Clarence House, "Tower Street" for Gower Street, the Roman Emperors " Trojan " and " Adrian," " Sir " Lionel Curtis. The date of the General Strike is put back to 1924 and " vitamins " is a spelling that is to be deprecated, as it may possibly still mislead the common reader into thinking that vitamins are amines. This is a useful and an interesting book, and were it the work of an ordinary Ambassador it would be accepted with gratitude, but " Hell and Maria " Dawes is an author's name that arouses more expectation of amusement than the book satisfies. There are no flashes of humour in these pages, unless we count the quotation of the testimonial to the moral health of Chicago from Edgar Wallace. From the date of this handsome tribute, it seems to have been given while the great man was collecting