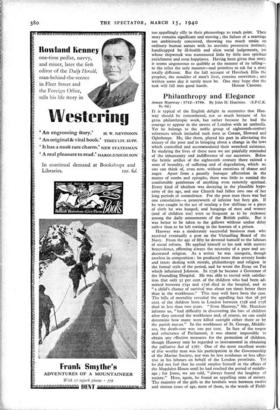 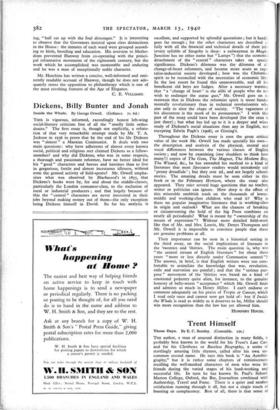 Jonas Hanway : 1712-1786. By John H. Hutchins. (S.P.C.K. 8s. 6d.) IT is typical of the English delight in eccentrics that Han- way should be remembered, not so much because of his great philanthropic work, but rather because he had the courage to appear in the streets of London with an umbrella. Yet he belongs to the noble group of eighteenth-century reformers which included such men as Comm, Howard and Oglethorpe. He, like them, played his part in alleviating the misery of the poor and in bringing about a change in the laws which controlled and accommodated their wretched existence. In studying the lives of these men we are painfully reminded of the inhumanity and indifference of our ancestors. Below the brittle artifice of the eighteenth century there existed a state of brutality, of suffering and of degradation, which no one can think of, even now, without emotions of shame and anger. Apart from a gauntly baroque affectation in the matter of tombs and epitaphs, there was little to remind the comfortable gentleman of anything even remotely spirit-bal. Every kind of idealism was decaying in the plausible hypo- crisy of the age, and our Church had fallen into one of her long periods of somnolence. For the poor man there was but one consolation—a pennyworth of inferior but fiery gin. If he was caught in the act of stealing a few shillings or a piece of cloth he was hanged; and hangings of men and women (and of children too) were so frequent as to be reckoned among the daily amusements of the British public. But it was better to be taken to the gallows without undue delay rather than to be left rotting in the horrors of a prison.

Hanway was a moderately successful business man who received eventually a post on the Victualling Board of the Navy. From the age of fifty he devoted himself to the labours of social reform. He applied himself to his task with austere benevolence, affirming always the necessity of a pure and un- decorated religion. As a writer he was energetic, though careless in composition : he produced more than seventy books and tracts dealing with morals, philanthropy and religion in the formal style of the period, and he wrote the Essay on Tea which infuriated Johnson. In 1756 he became a Governor of the Foundling Hospital. He was able to record with satisfac- tion that only 52 per cent. of the children who had been ad- mitted between 1741 and 1756 died in the hospital, and so " a child's chance of survival was about ten times better there than in the workhouse." This may well have been the case. The bills of mortality revealed the appalling fact that 58 per cent. of the children born in London between 1728 and 1758 died in less than two years. " Even Hanway," Mr. Hutchins informs us, " had difficulty in discovering the fate of children after they entered the workhouse and, of course, no one could determine how many were killed outright either there- or by the parish nurses." In the workhouse of St. George, Middle- sex, the death-rate was too per cent. In face of the torpor and reluctance of Parliament, it was almost impossible to obtain any effective measures for the protection of children, though Hanway may be regarded as instrumental in obtaining the palliative Act of 1767. One of the most excellent works of this worthy man was his participation in the Governorship of the Marine Society, nor was he less assiduous or less effec- tive in his labours on behalf of the London prostitute. Yet he did not feel that he could employ himself in the affairs of the Magdalen House until he had reached the period of middle- age ; for Jonas, we are told, " always feared the laughter of society." Here, again, he found an appalling state of _misery. The majority of the girls in the brothels were between twelve and sixteen years of age, most of them, in the words of Field-

ing, " half eat up with the foul distemper." It is interesting to observe that the Governors insisted upon class distinctions in the House : the inmates of each ward were grouped accord- ing to birth, breeding and education. His aversion to Metho- dism prevented Hanway from co-operating with the princi- pal reformative movement of the eighteenth century, but the work which he accomplished was memorable and enduring and he was a man of exceptionally noble character.

Mr. Hutchins has written a concise, well-informed and emi- nently readable account of Hanway, though he does not ade- quately stress the opposition to philanthropy which is one of the most revolting features of the Age of Elegance.