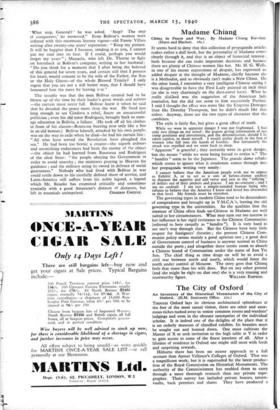 China in Peace and War. By Madame Chiang Kai-shek. (Hurst and Blackett. 16s.) Pr seems hard to deny that this collection of propaganda articles makes rather a dull book, but the personality of Madame come, clearly through it, and that is an object of historical interest

both because she can make important decisions and because there are plenty of Chinese women like her. Mr. H. G. Wells. in one of his recent expressions of despair, has expressed an added despair at the thought of Madame, chiefly because she

is a Methodist, and so obviously can't make a New China. On the other hand, I remember a very intelligent Chinese saying it

was disagreeable to have the First Lady painted an inch thick (as she is very charmingly on the dust-cover here). What he

really disliked was the suggestion of the American lady journalist, but she did not seem to him excessively Puritan. I said I thought the effect was more like the Empress Dowager

than like Dorothy Thompson, but he didn't much like that either. Anyway, those are the two types of character that she combines.

The style is fairly flat, but gives a great effect of truth.

While we were in apparent danger I was not frightened. I had only two things on my mind: the papers giving information of our troop positions and movements, and the determination, should I be taken captive, to shoot myself. I would prefer death to the fate of women who fall into the hands of bandits. But fortunately the attack was repelled and we went back to sleep.

" Apparent " is graceful ; they certainly were in great danger,

but she means " while we were being forced to notice it." The " bandits " seem to be the Japanese. The grande dame rebuke which seems to ignore what it condemns comes through into her propaganda writing very neatly: I cannot believe that the American people wish me to appear as Exhibit A, or to act as a sort of before-dinner cocktail to sharpen the appetite and add verve and zest to the " jollying " of dollars out of their pockets and purses. I am no conjurer ; and I am no cocktail. I am just a simple-minded human being who refuses to believe that the America I knew and loved has descended to that level. My friends must be mistaken.

The governing types in modern China tend to be descendants

of compradores and brought up in Y.M.C.A.'s, leaving the old governing type in the universities. So the qualities that the amateur of China often finds un-Chinese in Madame are well suited to her circumstances. What may turn out too narrow in her influence is her rigid resistance to the Chinese Communists (referred to here casually as " bandits "). It is very hard to see one's way through that. But the Chinese have very little respect for foreigners' theories ; the present Chinese Com- munist policy seems mainly a good agrarian one ; a great deal of Government control of business is anyway normal to China outside the ports ; and altogether there seems room to absorb a Chinese brand of Communism under the name of Sun Yat Sen. The chief thing as time drags on will be to avoid a civil war between north and south, which would force the north under control of Moscow. The story goes that Chiang feels that more than his wife does. But on any other ground (and she might be right on that one) she is a very rousing and