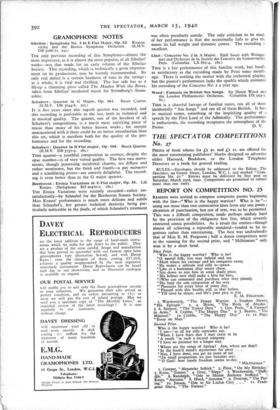 REPORT ON COMPETITION NO. 25 READERS were invited to compose

composite poems beginning with the line-" Who is the happy warrior? Who is he "- using not more than two consecutive lines from any one poem ; alteration of punctuation, but not of text, was to be permitted. This was a difficult competition, made perhaps unduly hard by the provision of the obligatory first line, which severely restricted comic possibilities. As a result the entries-though almost all achieving a reputable standard-tended to be in- genious rather than entertaining. The best was undoubtedly that of Miss E. M. Ferguson ; half a dozen competitors were in the running for the second prize, and " Militiaman " only won it by a short head.

' Who is the happy warrior? Who is he?

'0 mortal folk, you may behold and see.

'Mark where his carnage and his conquests cease, 'He makes a solitude and calls it-peace.

Like as a huntsman after weary chase, ' Sits down to rest him in some shady place.

His helmet now shall make a hive for bees, ' (Who can command and purchase what they please).

' His harp the sole companion of his way.

"Pleasures for every hour of every day.

" Pleased with this bauble still, as that before,

" Till tired he sleeps, and life's poor play is o'er.

Who is the happy warrior? Who is he? ' I am-' so all my jolly comrades say.

' When I have fears that I may cease to be ' A youth in such a jocund company ' I have no patience for a longer stay.

' Nay, I have done, you get no more of me "(In small proportions we just beauties see). " 0 God! how lonely freedom seems to-day.