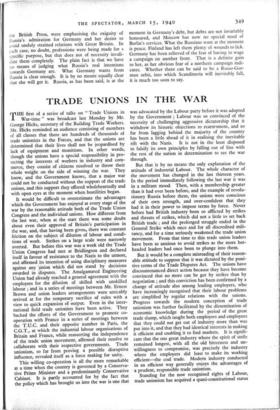 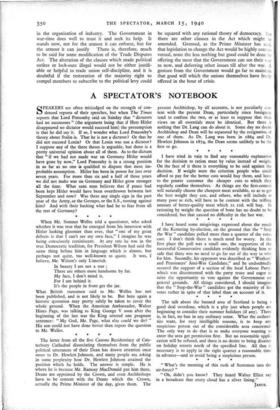 TRADE UNIONS IN THE WAR

THE first of a series of talks on " Trade Unions in War-time " was broadcast last Monday by Mr. George Hicks, secretary of the Building Trade Workers. Mr. Hicks reminded an audience consisting of members of all classes that there are hundreds of thousands of trade unionists in the Forces, and that the unions are determined that their lives shall not be jeopardised by lack of equipment and munitions. In other words, though the unions have a special responsibility in pro- tecting the interests of workers in industry and com- merce, they consist of citizens resolved to throw their whole weight on the side of winning the war. They know, and the Government knows, that a major war could not be conducted without the support of the trade unions, and this support they offered wholeheartedly and with open eyes at the moment when hostilities began.

It would be difficult to overestimate the advantages which the Government has enjoyed at every stage of the war by the reasonable attitude both of the Trade Union Congress and the individual unions. How different from the last war, when at the start there was some doubt about even their approval of Britain's participation in the war, and, that having been given, there was constant friction on the subject of dilution of labour and conch- dons of work. Strikes on a large scale were narrowly averted. But before this war was a week old the Trade Union Congress had met at Bridlington and declared itself in favour of resistance to the Nazis to the utmost, and affirmed its intention of using disciplinary measures against any "Onion which did not stand by decisions awarded in disputes. The Amalgamated Engineering Union had already reached a general agreement with the employers for the dilution of skilled with unskilled labour ; and in a series of meetings between Mr. Ernest Brown and union leaders arrangements were amicably arrived at for the temporary sacrifice of rules with a view to quick expansion of output. Even in the inter- national field trade unionists have been active. They backed the efforts of the Government to promote co- operation with France in a series of meetings between the T.U.C. and their opposite number in Paris, the C.G.T., at which the industrial labour organisations of Britain and France, while reasserting the independence of the trade union movement, affirmed their resolve to collaborate with their respective governments. Trade unionism, so far from proving a possible disruptive influence, revealed itself as a force making for unity.

This willing co-operation is all the more remarkable at a time when the country is governed by a Conserva- tive Prime Minister and a predominantly Conservative Cabinet. It is partly accounted for by the fact that the policy which has brought us into the war is one that was advocated by the Labour party before it was adopted by the Government ; Labour was so convinced of the necessity of challenging aggressive dictatorship that it withdrew its historic objections to rearmament, and so far from lagging behind the majority of the country has been a little ahead of it in realising the inevitable rift with the Nazis. It is not in the least disposed to falsify its own principles by falling out of line with the rest of the nation in determination to see the war through.

But that is by no means the only explanation of the attitude of industrial Labour. The whole character of the movement has changed in the last thirteen years. In the period immediately following the last war it was in a militant mood. Then, with a membership greater than it had ever been before, and the example of revolu- tionary Russia before them, the unions were conscious of their own strength, and over-confident that they had it in their power to impose terms by force. Never before had British industry been so afflicted by strikes and threats of strikes, which did not a little to set back British trade ; and the prolonged struggle ended in the General Strike which once and for all discredited mili- tancy, and for a time seriously weakened the trade union movement. From that time to this trade union leaders have been as anxious to avoid strikes as the more hot- headed leaders had once been to plunge into them.

But it would be a complete misreading of their reason- able attitude to suppose that it was dictated by the puni- tive terms of the Trade Disputes Act. The unions have discountenanced direct action because they have become convinced that no more can be got by strikes than by negotiation ; and this conviction has been confirmed by a change of attitude also among leading employers, who have increasingly recognised that their labour problems are simplified by regular relations with the unions. Progress towards the modern conception of trade unionism was further facilitated by the dissemination of economic knowledge during the period of the great trade slump, which taught both employers and employees that they could not get out of industry more than was put into it, and that they had identical interests in making it efficient and enabling it to find markets. It is signifi- cant that the one great industry where the spirit of strife remained longest, with all the old bitterness and un- willingness to compromise, was precisely the industry where the employers did least to make its working efficient—the coal trade. Modern industry conducted in an efficient way generally enjoys the advantages of a prudent, responsible trade unionism.

Standing for the now recognised rights of Labour, trade unionism has acquired a quasi-constitutional status in the organisation of industry. The Government in war-time does well to trust it and seek its help. It stands now, not for the utmost it can enforce, but for the utmost it can justify There is, therefore, much to be said for some modification of the Trade Disputes Act. The alteration of the clauses which made political strikes or lock-outs illegal would not be either justifi- able or helpful to trade union self-discipline, and it is doubtful if the restoration of the majority right to compel members to subscribe to the political levy could be squared with any rational theory of democracy. F.ut there are other clauses in the Act which might amended. Granted, as the Prime Minister has sa d, that legislation to change the Act would be highly cont. 0_ verstal, none the less nothing but good could be done ); offering the most that the Government can see their N's to now, and deferring other issues till after the war. A gesture from the Government would go far to mainuin that good will which the unions themselves have freely offered in the hour of crisis.