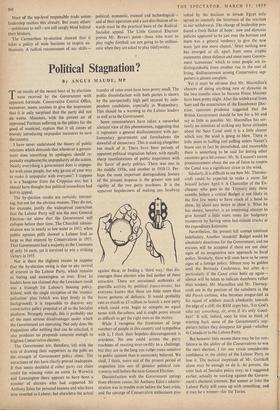 By ANGUS MAUDE, MP THE results of the recent bout of by-elections were received by the Government with apparent fortitude. Conservative Central Office, moreover, seems anxious to give the impression that it is only surprised that the party did not do worse. Ministers, with the patient air of oppressed Puritans suffering in the pillory for the good of mankind, explain that it all comes of bravely introducing unpopular measures to save the country.

I have never understood the theory of public relations which demands that whenever a govern- ment does something its apologists should re- peatedly emphasise the unpopularity of the action. Nearly everything a government does is unpopu- lar with some people, but why go out of your way to make it unpopular with everyone? I suppose it is a hangover from the Crippsian era; but I should have thought that political masochism had lost its appeal.

The by-election results are certainly interest- ing, but not for the obvious reasons. They do not, for example, justify the widespread conviction that the Labour Party will win the next General Election—let alone that the Government will Collapse before their time. The Churchill admini- stration was in nearly as low water in 1952, when public opinion polls showed a Labour lead as large as that enjoyed by Conservatives in 1951. That Government had a majority in the Commons of only 16 seats, yet it survived to win a striking victory in 1955.

Nor is there the slightest reason to suppose that the by-election swing is due to any revival of interest in the Labour Party, which remains as boring and meaningless as ever. Even its leaders have not claimed that the Lewisham result was a triumph for Labour's housing policy. Indeed, with the single exception of the 'munici- palisation' plan (which was kept firmly in the background), it is impossible to discover any constructive policy proposal at all in the Socialist platform. Strangely enough, this is probably one of the most serious disadvantages under which the Government are operating. Not only does the Opposition offer nothing that can be attacked, it also produces no proposals concrete enough to frighten Conservative electors.

The Government are, therefore, left with the task of drawing their supporters to the polls on the strength of Government policy alone. The attractions of this have clearly proved inadequate. It thus seems doubtful if either party can claim credit for winning votes on merit. In Warwick , and Leamington there appears to have been a number of electors who had supported Sir Anthony Eden for personal reasons and who have now reverted to Labour, but elsewhere the actual transfer of votes must have been pretty small. The public dissatisfaction with both parties is shown by the unexpectedly high poll secured by inde- pendent candidates, especially in Wednesbury. This should be a warning to the Labour leaders as well as to the Government.

Some commentators have taken a somewhat alarmist view of this phenomenon, suggesting that it represents a general disillusionment with par- liamentary government and foreshadows the downfall of democracy. This is making altogether too much of it. There have been periods of apparent political stagnation before, with equally sharp manifestations of public impatience with the 'farce' of party politics. There was one in the middle 1930s, and another in 1910-11. Per- haps the most important distinguishing feature of the present impasse is the greater size and rigidity of the two party machines. It is the apparent hopelessness of making any headway against these, or finding a 'third way,' that dis- courages those electors who find neither of them attractive. There are occasional outbreaks of guerrilla activity by political francs-tireurs, but everyone knows that these are little more than brave gestures of defiance. It would probably cost as much as £3 million to launch a new party which could even begin to compete on equal terms with the others, and it might prove almost as difficult to get the right men as the money.

While I recognise the frustration of large numbers of people in this country and sympathise with it, I think their hopeless discouragement is overdone. No one could accuse the party machines of reacting over-swiftly to a challenge, but they are in the long run rather more sensitive to public opinion than is commonly believed. We shall, I think, move out of the present period of stagnation into one of genuine political con- troversy well before the next General Election.

Dissatisfaction with the Government springs from obvious causes. Sir Anthony Eden's admini- stration was in trouble even before the Suez crisis, and the upsurge of ConservatiVe enthusiasm pro- yoked by the decision to invade Egypt only served to intensify the bitterness of the reaction to our withdrawal. The change of leadership pro- duced a fresh flicker of hope : new and dynamic policies appeared to be just over the horizon and there was a general tendency to give the new team 'just one more chance.' Since nothing new has emerged at all, apart from some cryptic statements about defence and some more Govern- ment 'economies' which to most people are in- distinguishable from another rise in the cost of living, disillusionment among Conservative sup- porters is almost complete.

Yet it must be obvious that Mr. Macmillan's chances of doing anything new or dynamic in the two months since he became Prime Minister have been pretty slight. After the withdrawal from Suez and the enunciation of the Eisenhower Doc- trine, common prudence suggested that the British Government should lie low for a bit and say as little as possible. Mr. Macmillan has cer- tainly no intention of striking any fierce attitudes about the Suez Canal until it is a little clearer which way the wind is going to blow. There is little point in huffing and puffing unless Nasser's house can in fact be demolished, and meanwhile there is something to be said for letting other countries get a bit crosser; Mr. St. Laurent's recent pronouncement about the use of force to reopen the Canal was a significant straw in the wind.

Similarly, it is difficult to see how Mr. Thorney- croft could be expected to make a name for himself before April 9. A Chancellor of the Ex- chequer who goes to the Treasury only three months before a critical Budget is not likely in the first few weeks to have much of a hand to show, let alone any desire to show it. What he has shown, however, is an interesting attempt to give himself a little more room for budgetary manceuvre by having some last-minute cracks at the expenditure Estimates.

Nevertheless, the present lull cannot continue indefinitely. Another 'standstill' Budget would be absolutely disastrous for the Government, and no excuses will be accepted if there are not clear signs of an imaginative new approach to fiscal policy. Similarly, there will soon have to be some signs of a foreign policy. Silence may be golden until the Bermuda Conference, but after it— particularly if the Canal crisis boils up again— silence will be taken to indicate dumbness rather than wisdom. Mr. Macmillan and Mr. Thorney- croft are in the position of the subaltern in the old Punch cartoon, who becomes tongue-tied as his squad of soldiers march obediently towards the edge of a cliff; the RSM urges him, Tor God's sake say something, sir, even if it's only Good- bye !' It will, indeed, soon be time to think of winning back some of the Government's sup- porters before they disappear for good—whether to Canada or to the LabounParty.

But however little reason there may be for con- fidence in the ability of the Conservatives to win the next election, I for one retain considerable confidence in the ability of the Labour Party to lose it. The tactical ineptitude of Mr. Gaitskell alone may be enough to do it. At present, the utter lack of Socialist policy may, as I suggested earlier, actually be working against the Govern- ment's electoral interests. But sooner or later the Labour Party will come up with something; and it may be a winner—for the Tories.