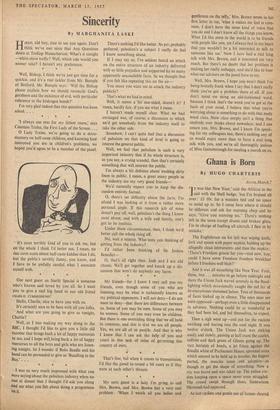 By MARGHANITA LASKI HALLO, old boy, nice to see you again. Don't think we've met since that Any Questions down at Trollop Monachorum. What's it tonight —white-slave traffic? Well, which side would you sooner take? I haven't any preference.

Well, Bishop, I think we've just got time for a quickie, and it's a real tickler from Mr. Bumple of Bedford. Mr. Bumple says: Will the Bishop please explain how we should reconcile God's goodness and the existence of evil, with particular reference to the hydrogen bomb?'

I'm very glad indeed that this question has been asked. . . .

* * 'I always use ONO for my littlest room,' says Countess Tralee, the First Lady of the Screen....

0 Lady Tralee, we're going to do a docu- mentary on half-caste children, and knowing how interested you are in children's problems, we hoped you'd agree to be a member of the panel.

'• It's most terribly kind of you to ask me, but on the whole I think I'd better not. I mean, no line cards more about half-caste kiddies than I do, but the public's terribly funny, you know, and I have to be awfully careful what I associate mySelf with.

Our next guest on Starlit Special is someone who's known and loved by you all. So I want you to give a real big hand to our old friend CHARLIE CUMMERBUND!

Hallo, Charlie, nice to have you with us.

It's certainly nice to be here with all you folks. And what are you going to give us tonight, Charlie?

Well, as I was making my way along to the BBC, I thought I'd like to give you a little old number that brings back a lot of happy memories to me, and I hope will, bring back a lot of happy memories to all the boys and girls who are listen- ing tonight. So I wonder if Bobs Beadle and his band can be persuaded to give us 'Bundling in the Bus.' . . .

I was so very much impressed with what you were saying about the pabulum industry when we met at dinner that I thought I'd ask you along and see what you felt about doing a programme on it. There's nothing I'd like better. As Kr, probably gathered, pabulum's a subject I really do feel I know something about.

If I may say so, I've seldom heatd an attack on the entire structure of an industry delivered with so little prejudice and supported by so many apparently unassailable facts. So we thought that if you felt like repeating this on the air— You mean you want me to attack the industry publicly?

That's what we had in mind.

Well, it seems a 'bit one-sided, doesn't it? I mean, hardly fair, if you see what I mean.

I haven't made myself clear. What we had envisaged was, of course, a discussion in which we'd get somebody from the industry itself to take the other side.

Somehow, I can't quite feel that a discussion of pabulum on that kind of level is going to interest the general public.

Well, we feel that pabulum is such a very important industry that if its whole structure is, as you say, a crying scandal, then that's certainly something that will interest the public.

I'm always a bit dubious about washing dirty linen in public. I mean, a great many people in the industry are my very good friends— We'd naturally expect you to keep the dis- cussion entirely factual.

0, there's no difficulty about the facts. I'm afraid I was looking at it from a rather more personal angle. If this research job of mine doesn't payoff, well, pabulum's the thing I know most about, and with a wife and family, one's got to be realistic.

Under those circumstances, then, I think we'd better call the whole thing off.

No, wait a minute. Who were you thinking of getting from the industry?

I'd rather been thinking of Sir Joshua Benedict- 0, that's, all right then. Josh and I are old chums. We'll get together and knock up a dis- cussion that won't do anybody any harm.

My friends—for I know I may call you my friends, even though some of you who are listening may be what is technically known as my political opponents. I will not deny—I do not want to deny—that there are differences between us. Some of you may be men. Some of you may be women. Some of you may even be children. But there is one overriding thing that we all hold in common, and this is that we are all people. Yes, we are all of us people. And that is why I know that I can ask the help of you and yours in this task of mine of governing this country of ours.

• * * That's fine, bill when it comes to transmission. I'd like the panel to sound a bit more as if they were at each other's throats.

* * My next guest is a lady I'm gr ing to call Mrs. Brown, and Mrs. Brown has a very real problem : 'When I watch all you ladies and gentlemen on the telly,' Mrs. Brown wrote in her first letter to me, 'what it makes me feel is com- mon. I don't have the same kind of voice that you do and I don't know all the things you know. What I'd like most in the world is to be friends with people like you, yet I always feel in my heart that you wouldn't be a bit interested to talk to someone like me.' Now I have had a real long talk with Mrs. Brown, and it interested me very much. But there's no doubt that her problem is making her really unhappy, and she'd like to hear what our advisers on the panel have to say.

Well, Mrs. Brown, I hope you won't think I'm being brutally frank when I say that I don't really think you've got a problem there at all. If you don't mind me using an old-fashioned word, because I think that's the word you've got at the back of your mind, I believe that what you're worrying about is something to do with that nasty word class. Now class simply isn't a thing that anybody ever thinks about nowadays, and I can assure you, Mrs. Brown, and I know I'm speak-. ing for my colleagues too, there's nothing any of us would enjoy more than to have a real long talk with you, and we're all thoroughly jealous of Miss Gainsborough for stealing a march on us.