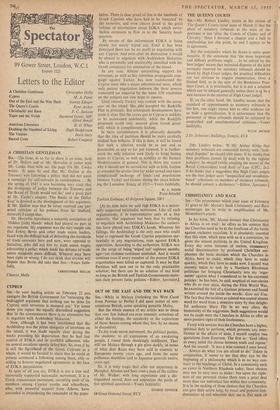 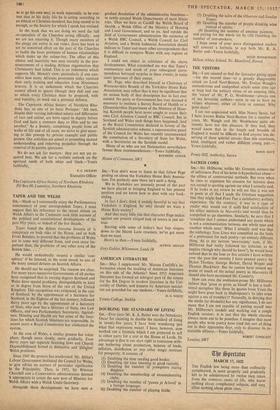 SIR,—The prominence which' your issue of February 15 gives to Mr. Mason's book Christianity and Race encourages me to write in amplification of Mr. Montefiore's article.

In his book, Mr. Mason stresses that Christianity in Africa is on trial : he offers as his opinion that the Churches need to be in the forefront of the battle against exclusive racialism. It is absolutely essential that this view, which here with us is a conviction, be given the utmost publicity in the United Kingdom.

recently taken to task by a Northern Rhodesian politician for bringing Christianity into my 'argu- ments' against what I considered to be his extremist policies : he has been, he said, sceptical of non-clerics who do so ever since, during the First World War, he examined the belt of a German prisoner and found written around the inside the words: Gott wit Uns. The fact that the incident as related was copied almost word for word from a detective story by that delight- ful authoress Mary Fitt in no way alters the immorality of the suggestion. Such suggestions would not be made were the Churches in Africa to offer us more positive signs of their fearlessness.

Faced with notions that the Churches have a higher, spiritual duty to perform, which prevents any inter- ference in the affairs of state, I myself employ two quotations from Emerson. The first is: 'God offers to every mind the choice between truth and repose.' And the second : 'It was a wise counsel I once heard. ... Always do what you are afraid to do.' Taken in conjunction, it seems to me that they can be the beginning of a philosophy which is in no way con- trary to the teachings of Christ. In a community such as exists in Northern Rhodesia today, these choices may not be easy ones to Make: but upon the right- ness of our personal choice there rests a great deal more than our individual fate within that community. It is in the making of these choices that the Churches can give their active help, by vocal and positive "Con- demnation of evil wherever they sec it. For each of

is to go his own way', to work separately, to be con- tent that in his daily life he is acting according to an ethical or Christian standard, has long ceased to be enough, as the Society for which I speak has realised.

In the work that we are doing we need the full co-operation of the Churches acting officially : and we are not receiving it. Though many members of the clergy arc active in our ranks, there has been as yet no concerted effort on the part of the Churches to tackle the basic problems of human relationships which make up the colour-bar. The effect of this silence and inactivity was seen recently in the pro- nouncement of a leading African organisation that Christianity had failed. This is an indictment which supports Mr. Mason's view, particularly if one con- siders how many Africans prominent today received their early training and education from Missionary sources. It is an indictment which the Churches cannot afford to ignore (though they did) and one to which every Christian rhust be prepared, with real humility, to work out a personal defence.

The Capricorn Africa Society of Northern Rho- desia has, as one of its basic Precepts: 'All men, despite their varying individual talents and differences of race and colour, are born equal in dignity before God and have a common duty to Him and to one another.' As a Society, comprising people from all walks of life and of all races, we strive to give mean- ing to this precept by private example and public protest. Our activities are aimed at promoting mutual understanding and removing prejudice through the removal of its parent, ignorance.

We do not ask for martyrs: they are not yet re- quired here. We ask for a realistic outlook on the spiritual needs of both white and black.—Yours faithfully, P. C. JACKSON Executive Officer The Capricorn Africa Society of Northern Rhodesia PO Box 98, Luanshya, Northern Rhodesia