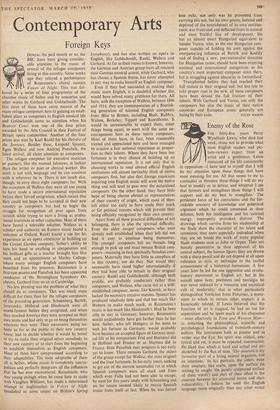 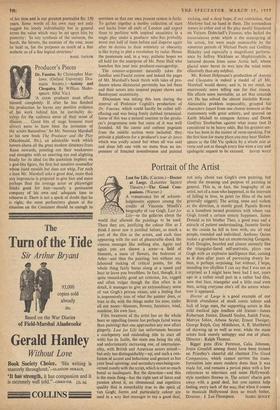 Enemy of the Rose FOR forty-five years Percy Wyndham Lewis,

who died last week, chose not to provide what most English readers and pic- ture-viewers expect from an artist and a gentleman. Lewis remained all his life consistently in opposition—I have said to myself that I will fix my attentiOn upon those things that have most meaning for me. All that seems to me to contradict or threaten these.-things I wilt do my best to modify or to defeat, and whatever I see that favours and strengthens those things I will support and do my best to strengthen.' The persistent force of his convictions and the for- midable armoury of knowledge and polemical argument which he could command in their defence, both his intelligence and his satirical energy, improperly provoked distrust. The drawings which survive from his studentship at the Slade show the character of his talent and intentions; they seem especially individual when they are set beside the work of more popular Slade students such as John or Orpen. They are fiercely penetrative in their appraisal of his central subject, the human figure; they are drawn with a sharp pencil and do not depend at all upon reference in style or technique to the tactful sensuousness of a historical humanism. A few years later he led the one aggressive and revolu- tionary movement in English art, but in his assault upon taste, prettiness and nostalgia he was never seduced by a romantic and uncritical cult of modernity; that is what particularly distinguished Vorticism from Futurism, a move- ment to which in certain other, respects it is historically related. If Lewis believed that the function of art is magical, he had no use for superstition and he spent much of his eloquence —most effectively in Time and Western Man— in criticising the philosophical, scientific and psychological foundations of twentieth-century gulture. His instrument both as painter and as writer was the Eye; his spirit was critical, ana- lytical and yet, it must be repeated, constructive. He 'liked that which is hard and actual and un- disturbed by the flux of time. The ossature is my favourite part of a living animal organism, not its intestines.' In his portraits the sitters wear their ossature, like crabs, upon the surface (in writing he sought `the purely sculptured surface of sheer words') and part of their effect is the contrast between his armoured forms and their vulnerability. I believe he used the English language more originally than any other writer of, his time and is our greatest portraitist for 150 years. Some words of his own may not only suggest his lonely individuality but in general terms the value which may be set upon him by posterity : 'In any synthesis of the universe, the harsh, the hirsute, the enemies of the rose, must be built in, for the purposes as much of a fine esthetic as of a fine logical structure.'