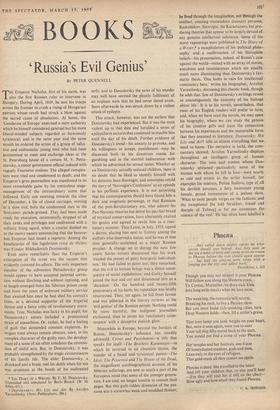 . they called down mighty curses on who- soever should stay behind. And they sank in the sea a mass of iron; and swore never to return to Phociea before the iron should again appear . . . but half the citizens were taken with a longing for the city and sailed back Herodotus, i, 165 Though you may not suspect it your Phocam Will follow you along the Western coast, To Cyrnus, Marseilles, to dove-rich Elea Into long exile sneaks what we love most.

The weakling, the romantic will, return, Breaking his oath, to live a Persian slave. But you must build rich-speaking cities, turn Deep Western fields—then, fill a settler's grave.

That iron lump you sank weighs on your heart. But, were it seen again, were you to steer Your tall ship fifty-oared back to the start, You would not find a stone of your Phocm.

Her temples and her festivals, one frieze Of honeydusted maidens, gods and men, Lean only in the eyes of refugees, That gold-mask all they cannot see again.

Phocxa is dead. She travelled to the heart. And tell your children that, or else you'll hear —.For they will visit her if still on the chart— How ugly and how small they found Phocma.