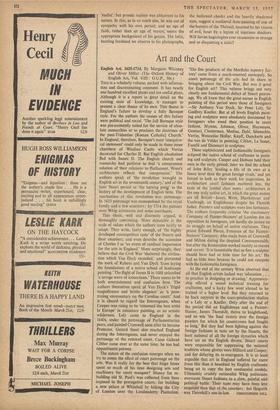 Art and the Court

THIS is a scholarly volume, packed with informa- tion and discriminating comment. It has nearly one hundred excellent plates and ten useful plans. Although it is a report in great detail on the existing state of knowledge, it manages to present a clear theme of its own. This theme is England's failure to develop a fully Baroque style. For the authors the causes of this failure were political and social. 'The full Baroque style was pre-eminently suited for the service of abso- lute monarchies or to proclaim the doctrines of the post-Tridentine [Roman Catholic] Church.' In England, therefore, Baroque's most 'unequivo- cal statement' could only be made in those inner chambers of Windsor Castle which Verrio decorated for Charles II. But English absolutism fled with James II. The English church and monarchy had perforce to find 'a compromise solution of their relations to Parliament. Wren's architecture reflects that compromise.' The authors speak of 'the revolution wrought in English art in the seventeenth century,' and of the later Stuart period as 'the turning poiqr in the history of the development of English taste. The mechanism of this revolution was patronage. In 1625 patronage was monopolised by the royal family and a few courtiers: by 1714 the patrons were Whig aristocrats and some merchants.

This thesis, well and discreetly argued, is thoroughly convincing. More debatable is the scale of values which the authors seem tacitly to adopt. They write, fairly enough, of 'the highly developed cosmopolitan taste' of the Stuarts and their courtiers; and even describe the accession of Charles I as 'an event of cardinal importance for the arts in England.' More surprisingly, they believe that the Civil War 'shattered the civilisa- tion which Van Dyck recorded,' and prevented the work of Rubens and Van Dyck 'from laying the foundations of a native school of landscape painting.' The flight of James II in 1688 unleashed 'a savage wave of iconoclasm.' There seems to be both overstatement and confusion here. The authors themselves speak of Van Dyck's 'frigid magnificence and brittle elegance' as 'a pene- trating commentary on the Caroline court.' And it is absurd to regard the Interregnum, when Cooper was rising to be 'esteemed the best artist in Europe' in miniature painting, as an artistic wilderness. Lely came to England in the 1640s, under the patronage of Parliamentarian peers, and painted Cromwell soon after he became Protector. Gerard Soest also reached England during the Interregnum, and never enjoyed the patronage of the restored court. Caius Gabriel Cibber came over at the same time; he too had oppositionist patrons.

The nature of the confusion emerges when we try to assess the effect of court patronage on the arts. Was it really for the best that Inigo Jones spent so much of his time designing sets and machinery for court masques? Money for re- building old St. Paul's was collected from fines - imposed in the prerogative courts; for building a new palace at Whitehall by bilking the City of London over the Londonderry Plantation. The fine products of the Mortlake tapestry fac- tory' came from a much-resented monopoly. So court patronage of the arts had its share in bringing about the Civil War. But was it good for English art? This volume brings out very clearly one fundamental defect of Stuart patron- age. We all knew that the great names in English painting of this period were those of foreigners —Sir Anthony Van Dyck, Sir Peter Lely, Sir Godfrey Kneller. But at all levels English paint- ing and sculpture were absolutely dominated by foreigners who owed their position to court fashion. Mytens, Johnson, Oliver, Huysmans, Gennari, Closterman, Medina, Dahl, Siberechts, Verrio, Wenceslas Hollar, Knyff, Danckerts and the van de Veldes in painting; Cibber, Le Sueur, Fanelli and Dieussart in sculpture.

These sophisticated and fashionable foreigners eclipsed the native school of craftsmen in paint- ing and sculpture. Cooper and Dobson held their own in the early period; later we find the school of John Riley 'leading a life of its own at a lower level than the great foreign rivals,' and yet forced to look to their work for inspiration. In architecture court fashions mattered less, the taste of the landed class more : architecture is the one truly native art, in which the great names are all British—Jones, Wren, Hawksmoor, and Vanbrugh, an Englishman despite his Flemish father. Painters and sculptors were less fortunate. The authors frequently criticise 'the reactionary Company of Painter-Stainers' of London for its opposition to foreigners, yet hardly do justice to its struggle on behalf of native craftsmen. They praise Edward Pierce, Freeman of the Painter- Stainers' Company, who made busts of Cromwell and Milton during the despised Commonwealth, but after the Restoration worked mainly as mason and carver. 'It is lamentable that so fine a sculptor should have had so little time for his art.' He had so little time because he could not compete with the fashionable foreigners.

At the end of the century Wren observed that all that English artists lacked was 'education,. . .

in practice in designing or drawing.' Apprentice- ship offered a sound technical training for craftsmen, and a lucky few went abroad to be trained at a higher level. But they returned to be hack copyists in the mass-production studios of a Lely or a Kneller. Only after the end of the period did an Englishman and a Painter- Stainer, James Thornhill, thrive to knighthood, and so win 'the final victory over the foreign painters for which his countrymen had fought so long.' But they had been fighting against the foreign fashions in taste set by the Stuarts, the least national of all the foreign dynasties which have sat on the English throne. Stuart courts were responsible for suppressing the national tradition whose glories were Hilliard and Cooper, and for delaying its re-emergence. It is at least arguable that art in England suffered far more from this than it benefited by English craftsmen being set to copy the best continental models. Ultimately crudely nationalist Whig politicians overcame Stuart fashions in a slow, painful and political battle. Their taste may have been less exquisite than that of-the courtiers : but Hogarth