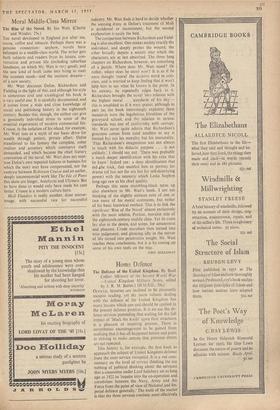 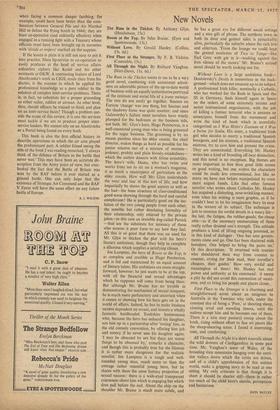 The Defence of the United Kingdom. By Basil Collier. (History of the Second World War —United Kingdom Military Series, edited by J. R. M. Butter.) (H.M.S.O., 50s.) OFFICIAL histories are inclined to be pleasantly escapist reading, yet the latest volume dealing with the defence of the United Kingdom has many lessons which can and should be applied to the present defence position. It is no use the de- fence services pretending that waiting for the full impact of 'Mack the Knife' upon their structures is a pleasant or inspiring process. There is nevertheless encouragement to be gained from realising that it has all happened before and point in striving to make certain that previous errors arc not repeated.

This history is, for example, the first book to approach the subject of United Kingdom defence from the inter-service viewpoint. It is a sad com- mentary on the level of service thinking (to say nothing of political thinking about the services) that a committee under Lord Salisbury sat as long ago as 1922 to 'inquire into the co-operation and • correlation between the Navy, Army and Air Force from the point of view of National and Im- perial defence generally.' The truth of the matter is that the three services combine most effectively

when facing a common danger (nothing, for example, could have been better than the com- bination between General Pile and Air Marshal Hill to defeat the flying bomb in 1944); they are least co-operative (and militarily effective) when engaged in a running fight with a Treasury whose officials must have been brought up in nurseries with 'divide et impera' marked on the nappies.

If the lesson is plain it is still not easy to put it into practice. Mere lip-service to co-operation so easily produces at the head of service affairs colourless ciphers like Keitel and his other assistants at OKW. A contrasting feature of Lord Alanbrooke's work as CIGS, made clear from his diaries, is the manner in which he applied his professional knowledge as a pure soldier to the solution of complex inter-service problems. There is, in fact, no substitute for a proper grounding as either sailor, soldier or airman. At what level, then, should officers be trained to think and plan on an inter-service basis? Though a problem out- side the scope of this review, it is one the services must tackle if we are to produce proper inter- service leaders. We cannot rely on an Alanbrooke or a Portal being found on every bush.

This book is also the first official history to describe operations in which the air arm played the predominant part. A soldier friend seeing the title of the book I was reading remarked, 'I always think of the defence of Britain as the battle that never was.' This may have been an accurate de- scription from the Army point of view, but over- looked the fact that the Battle of Britain was won by the RAF before it ever started as a ground battle. One can only hope that the existence of Strategic Air Command and the RAF V Force will have the same effect on any future battle of Europe.