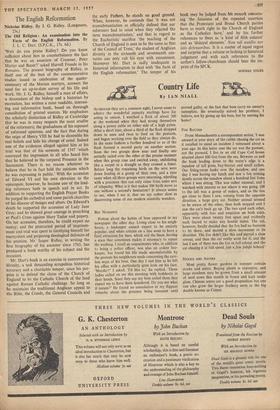 Page 27, 15 March 1957 — Fox ROUTED From Massachusetts a correspondent writes, 'I was amused
Close

Fox ROUTED From Massachusetts a correspondent writes, 'I was amused

at your story of the rabbit chasing the cat as it recalled to mind an incident I witnessed about a year ago. In this latter case the cat was the pursuer, not the pursued. I live in an old Cape Cod house situated about 600 feet,from the sea. Between us and the bank leading down to the water's edge is a meadow of tall grass, bay-berries and small cedars. Our living-room looks over the meadow, and one day I was having my lunch and saw a fox coming slowly across the meadow about a hundred feet from where I was sitting. This was rather unusual, and I watched. with interest to see where it was going. Off to the left was a group of cedars, and as the fox got close to them I saw, coming from the opposite direction, a large grey cat. Neither animal seemed to be aware of the other, then both stopped and I saw the cat's back go up. The two eyed each other, apparently with fear and suspicion on both sides. They were about twenty feet apart and evidently each feared to make any hostile move. The cat, however, finally decided that the fox had no business to be there, and started a slow movement in its direction. The fox didn't like this and started a slow retreat, and then the cat really went for it, and the last I saw of them was the fox in full retreat and the cat chasing it at full speed, just a few jumps behind.'