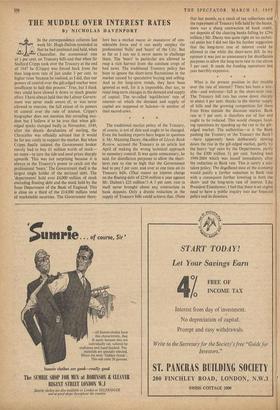 THE MUDDLE . OVER INTEp,EST RATES By NICHOLAS DAVENPORT IN the

correspondence columns last week Mr. Hugh Dalton reminded us that he had instituted and held, when Chancellor, the economical rate

of 1 per cent. on Treasury bills and that when Sir Stafford Cripps took over the Treasury at the end of 1947 he (Cripps) was forced back from the then long-term rate of just under 3 per cent. to higher rates 'because he realised, as I did, that our powers of control over the gilt-edged market were insufficient to halt this process.' True, but I think they could have slowed it down to much greater effect. I have always held that the Labour Govern- ment was never made aware of, or was never allowed to exercise, the full extent of-its powers of control over the rate of interest. Cripps's biographer does not mention this revealing inci- dent but I believe it to be true that when gilt- edged stocks slumped badly in November, 1949, after the drastic devaluation of sterling, the Chancellor was officially advised that it would be far too costly to support the market. But when Cripps finally insisted the Government broker merely had to buy £1 million worth of stock— no more—to turn the tide and send prices sharply upwards. This was not surprising because it is always in the Treasury's power to catch out the professional 'bears.' The Government itself is the largest single holder of the national debt. The 'departments' hold over £4,000 million of stock excluding floating debt and the stock held by the Issue Department of the Bank of England. This is close on a third of the £14,000 million total of marketable securities. The Government there-

fore has a market masse de manauvre of con- siderable force and it can easily outplay the professional 'bulls' and 'bears' of the City. But as far as I can see it never seems to challenge them. The 'bears' in particular are allowed to reap a rich harvest from the constant crops of bad news. The traditional Treasury policy has been to ignore the short-term fluctuations in the market caused by speculative buying and selling. And as for long-term trends, they have been ignored as well, for it• is impossible, they say, to resist long-term changes in the demand and supply of capital. The so-called 'equilibrium' rate of interest—at which the demand and supply of capital are supposed to balance—is another of their sacred cows.

The traditional market policy of the Treasury, of course, is out of date and ought to be changed. Even the banking experts have begun to question it. Mr. Manning Dacey, the editor of Lloyds Bank Review, accused the Treasury in an article last April of making the wrong technical approach to monetary control. It was quite unnecessary, he said, for disinflation purposes to allow the short- term rate to rise so high that the Government had to pay 5 per cent. and over at one time on its Treasury bills. ' (That meant an interest charge on the floating debt of £250 million a year against Mr. Dalton's £25 million!) A 5 per cent, rate in itself never brought about any contraction in bank deposits. Only a drastic reduction in the supply of Treasury bills could achieve that. (Note that last month, as a result of tax collections and the repayment of Treasury bills held by the banks, there was a sharp contraction of bank credit, net deposits of the clearing banks falling by £294 million.) Mr. Dacey was quite right on his techni- cal point but I did not like his further suggestion that the long-term rate of interest could be allowed to rise while the short-term fell. In my opinion it was just as unnecessary for disinflation purposes to allow the long-term rate to rise above, 5 per cent. It made the funding operations last year horribly expensive.

What is the present position in this muddle over the rate of interest? There has been a size- able—and welcome—fall in the short-term rate. The Treasury bill rate has come down sharply to about 4 per cent. thanks to the shorter supply of bills and the growing competition for them from firms outside the discount market. Bank rate at 5 per cent, is therefore out of line and ought to be reduced. This would cheapen fund- ing operations by speeding up the rise in the gilt- edged market. The authorities—is it the Bank pushing the Treasury or the Treasury the Bank? —have apparently been deliberately slowing down the rise in the gilt-edged market, partly by the heavy 'tap' sales by the Departments, partly by the £300 million 31 per cent, funding loan 1999-2004 which was issued immediately after the reduction in Bank rate. This is surely a mis- taken policy. The disinflated state of the economy would justify a further reduction in Bank rate with a consequent further lowering in both the short- and the long-term rate of interest. Like President Eisenhower, I feel that there is an urgent need to have a public inquiry into our financial policy and its direction.