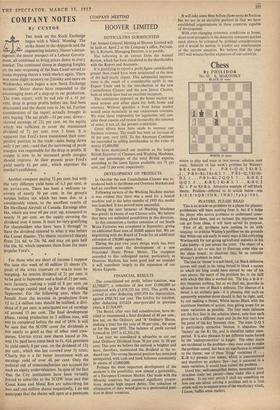 THE week on the Stock Exchange began with a 'black' Monday. The strike threat to the shipyards and the engineering industry,Nasser's intran- sigence, the nearer prospect of a Labour Govern- ment, all combined to bring prices down in every tnarket. The continued slump in shipping freights on the near reopening of the Suez Canal served to make shipping shares a weak market again. There was some slight recovery on Tuesday and more on Wednesday which began a new Stock Exchange account. Motor shares have responded to the encouraging news of a step-up in car production. The FORD report, with its sad tale of a 45 per cent, drop in group profits before tax, had been discounted and the shares rose to 34s. 6d. Further consideration of the report actually brought in new buying. The net profit-34 per cent, down— showed earnings of 231 per cent, on the equity which was sufficient to cover the maintained dividend of 71 per cent. over 3 times. It is apparent that Ford's have maintained their com- petitive position in the trade—sales being down only 4 per cent.—and that the narrowing of profit margins was responsible for the drop in profits. If output is now to be increased profit margins should improve. At their present price Ford's yield nearly 41 per cent., which expresses the market's confidence.

Another company paying 71 per cent, but with the very different yield basis of 6.3 per cent. is DE HAVILLAND. There has been a welcome re- covery of nearly 50 per cent. in the group's surplus before tax which has been due, to a considerable extent, to the excellent results of De Havilland Aircraft of Canada. Earnings after tax, which are over 60 per cent, up, amounted to nearly 31 per cent, on the equity covering the dividend over 4 times. It must be very gratifying for shareholders who have 'seen it through' to have the dividend restored to what it was before the Comet disaster. The shares recovered sharply from 21s. 6d. to 23s. 9d. and may yet gain half the 10s. 9d. which separates them from the more popular Ford's.

For those who are short of income I suppose the issue this week of 40 million 1 shares (5s. paid) of the STEEL COMPANY OF WALES must be tempting. An interim dividend of 21 per cent. is to be paid in September and a final of 34 per cent. next January, making a yield of 8 per cent, on the average capital paid up for the year ending September. For the following year, when the benefit from the increase in production from 14 to 2.4 million tons should be realised, a divi- dend of 8 per cent. is anticipated out of earnings of around 15 per cent. The final development Phase, raising production to 3 million tons, will not be completed before the end of 1959. It will be seen that the SCOW cover for dividends is not nearly so good as that of other steel com- panies. UNITED STEEL new shares issued at 30s. and 15s. paid have come back to is. 41d. premium to yield nearly 8 per cent. on the dividend of 124 per cent., which was last covered over 51 times. Clearly this is a far better investment with an earnings yield of over 46 per cent. Only the political risk of renationalisation can account for' such an equity undervaluation. In spite of the fact that the City institutions have been virtually forced to subscribe to the SCOW issue and that Guest Keen and Metal Box are subscribing for two and one million shares respectively, I do not anticipate that the shares will open at a premium.