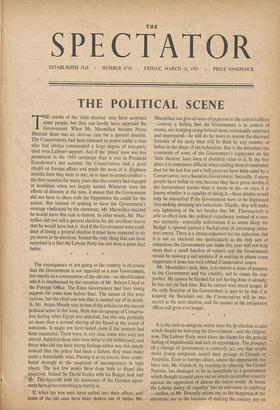 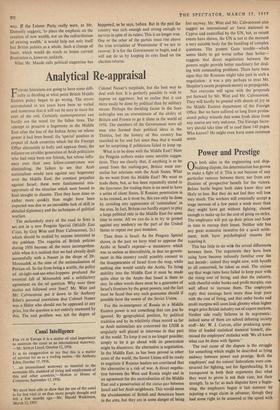 THE results of the 'little election' may have surprised some people, but they can hardly have surprised the Government. When Mr. Macmillan became Prime Minister there was an obvious case for a general election. The Conservatives had been returned to power under a man who had always commanded a large degree of non-party (and even Labour) support. And if the 'peace' issue was less prominent in the 1955 campaign than it was in President Eisenhower's last autumn, the Conservatives had a good record on foreign affairs and made the most of it. Eighteen months later they went to war, or at least to armed conflict— the first occasion for many years that the country had engaged in hostilities when not largely united. Whatever were the effects of disunity at the time, it meant that the Government did not have to share with the Opposition the credit for the action. But instead of seeking to have the Government's courage vindicated by the electorate, Mr. Macmillan decided he would leave this task to history. In other words, Mr. Mac- millan did not call a general election for the excellent reason that he would have lost it. And if the Government were confi- dent of losing a general election it must have expected to do yet worse in by-elections. Indeed the only thing that can have surprised it is that the Labour Party has not done a great deal better.

The consequence of not going to the country is of course that the Government is not regarded as a new Government, but merely as a continuation of the old one—an identification which is emphasised by the retention of Mr. Selwyn Lloyd at the Foreign Office. The Eden Government had been losing support for some time before Suez. The causes of this were various, but the chief one was that it seemed out of its depth. As Mr. Angus Maude says in one of the articles on the current political scene in this issue, there was an upsurge of Conserva- tive feeling when Egypt was attacked, but this was probably no more than a normal stirring of the blood at the sound of tom-toms. It might not have lasted, even if the venture had been successful. There were, in any case, some who were not stirred. Added to those who were bitter at the-withdrawal, and those who did not have strong feelings either way but simply noticed that the policy had been a failure, they must make quite a formidable total. Putting it at its lowest,- Suez contri- buted strongly to the suspicion of incompetence in high places. The last few weeks have done little to dispel this suspicion. Indeed Sir David Eccles with his Budget leak and Mr. Thorneycroft with his innocence of the German agree- ment have done something to fortify it.

If, when his new men have settled into their offices, and some of the old ones have been shaken out of theirs, Mr. Macmillan can give an aura of expertise to the nation's affairs —convey a feeling that the Government is in control of events, not trudging along behind them, continually surprised and unprepared—he will do far more to restore the electoral fortunes of his party than will be done by any number of bribes in the shape of tax reductions. But in the meantime the comments of some of the Government's supporters on the 'little election' have been of doubtful value to it. In the first place it is sometimes difficult when reading them to remember that for the last five and a half years we have been ruled by a Conservative, not a Socialist, Government. Secondly, if many people have failed to vote because they have grave doubts if the Government knows what it wants to do—or even if it knows whether it is capable of doing it—these doubts would only be intensified if the Government were to be frightened into making sweeping tax reductions. Thirdly, they will make any lightening of the tax burden that Mr. Thorneycroft is able to effect look like political expediency instead of econo- mic necessity—especially unfortunate if as seems likely the Budget is opened against a background of increasing indus- trial unrest. There is a strong argument for tax reduction, but it is not an electoral one (particularly as the only sort of reductions the Government can make this year will not help more than a small fraction of voters); and the Government would be making a sad mistake if in seeking to please some supporters it loses less rock-ribbed Conservative voters.

Mr. Macmillan's task, then, is to restore a sense of purpose to the Government and the country, not to cosset his sup- porters. He cannot be blamed for not having done it already; he has not yet had time. But he cannot wait much longer. If the only function of his Government is seen to be that it is keeping the Socialists out, the Conservatives will be mas- sacred at the next election, and the queues at the emigration offices will grow ever longer.

It is the rush to emigrate rather than the by-election results which should be worrying the Government--and the Opposi- tion. The Labour Party must share the blame for the general feeling of hopelessness and lack of opportunity. The prospect of a change of government is certainly not one that would make young emigrants cancel their passage to Canada or Australia. Even in foreign affairs, where the opportunity has been vast, Mr. Gaitskell, by insisting on 'obeying' the United Nations, has managed to be as unrealistic as a government which thought it could carry out an attack on another country against the opposition of almost the entire world. At home the Labour policy of 'equality' has no relevance to anything —neither, as Mr. Donnelly points out, to the happiness of the electorate nor to the business of making the country pay its way. If the Labour Party really were, as Mr. Donnelly suggests, `to place the emphasis on the creation of new wealth, not on the redistribution of existing wealth,' it would help not only itself but British politics as a whole. Such a change of heart, which would do much to lessen current frustration is, however, unlikely.

What Mr. Maude calls political stagnation has happened, as he says, before. But in the past the country was rich enough and strong enough to survive in spite of its rulers. This is no longer true. One or the other of the parties must rise above the trite trivialities of Westminster if we are to recover. It is for the Government to begin, and it will not do so by keeping its eyes fixed on the election returns.