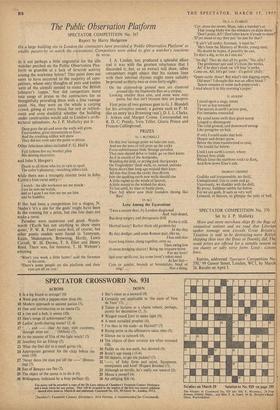 On a large building site in London the contractors have provided a 'Public Observation Platform' to enable passers-by to watch the .excavations. Competitors were asked to give a watcher's reactions in verse.

Is it not perhaps a little ungrateful for the idle Watcher perched on the Public Observation Plat- form to grumble at a lack of feverish activity among the workmen below? This point does not seem to have occurred to the majority of com- petitors, whose only thoughts of pots and kettles were of the utensils needed to make the British labourer's 'cuppa.' Nor did competitors burst into songs of praise to the contractors for so thoughtfully providing them with a free vantage point. No, they were on the whole a carping crowd, gibing at every break for rest or refresh- ment and even doubtful whether the building under congtruction would add to London's archi- tectural splendours. As J. P. Mullarky put it :

Deep goes the pit and soon the walls will grow, Exertion less, great monuments to Ease; And the resulting edifice will show They did not even take the pains to please.

and John S. Horgan's Death to all those who try in vain to spoil The toiler's pleasures—watching others toil.

I watch : the idle workman see me watch: I see he sees me watch, and as I gaze! see him see me see him and he huddles.

If this had. been a competition for a slogan, N. Nadin's 'it's a site for the gods' might have been In the running for a prize, but one line does not make a verse.

'Won't you work a little faster,' said the foreman • to his crew, 'There's some people on the platform and their eyes are all on you.'

J. A. Lindon, too, produced a splendid effort and it was with the greatest reluctance that I discarded it; but, as an extract will show, other competitors might object that his sixteen lines with their internal rhymes might more suitably be printed as thirty-two or even forty-eight :

On the cluttered-up ground men are clustered around like the bluebottle flies on a corpus, Looking smaller than ants, and some wear only pants, but that isn't because they are paupers.

On this free vantage point we take our ease, And see the sons of toil prise up the rocks From subterranean beds.. Strange paradox That men should delve to build; go on their knees As if in search of the Antipodes.

Wielding the drill, or prying pick that knocks On Troglodytes' thick walls, or. turned, unlocks Stone doors that long ago mislaid their keys : All this that from the cavity thus driven Into the quaking earth new walls should rise A little nigher ,to the winds of heaven, A little nearer to the wished-for skies, To last until, by time or battle riven, They fall where now their founders throng like flies! fr. wt.) Love Among the Excavations 'Twas a cancer dear, by London diagnosed And bull-dozed, But deep surgery and therapeutic drill Probe it still.

Morbid fancy! Rather think old gardens lay In the clay By that dredger, and some Roman pair, like us,

Thus and thus Gave long kisses, clung together, even so,

Then swing low 0 sweet dredging chariot ! Bring me treasure-trove For my love!

Spit your spoils out, lay some lover's token meet

'Cor, stone the crows, Mum, take a butcher's at That young bloke wiv the whiskers on dahn there.'

'He's from the Ministry of Works, young man; No doubt he hopes, if possibly he can, To start a dig, as far as I can see.

'Queer cattle, those! But what's this digging caper, Old man? I thought this was an office block?'

'Saxon remains or some such poppycock : I read about it in this morning's paper.'

I stood upon a stage, intent To see at last revealed The secrets in earth's prison pent, For centuries concealed.

My mind more swift than giant scoop Longed to disintegrate The solid ground, and downward swoop Like peregrine on bait.

If only I could make that hole Deeper and deeper grow, Below the trees transformed to coal, The fossils far below; Until I saw earth's centre, where Eternal fires abide Which force the stubborn rocks to flare, And flow down Etna's side.

Godlike and irresponsible, we thrill, Unimplicated, free to come and go.

Vicariously, we shudder with the drill, By proxy, bulldoze rubble far below.

For we are gods. It suits us very well Leisured, in heaven, to glimpse the toils of hell.