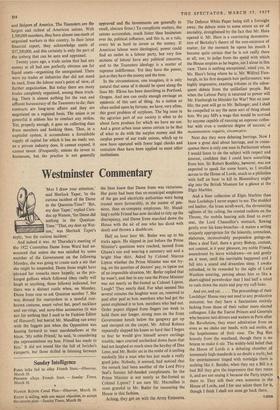 And indeed it was. At Thursday's meeting of the 1922 Committee Dame Irene Ward had an- nounced that unless she was satisfied by some member of the Government on the following Monday, she was going to create such a stir that she might be suspended. Dame Irene might have phrased her remarks more happily, as the pro- longed guffaws which followed (they really will laugh at anything, those fellows) indicated, but there was a distinct rustle when, on Monday, Dame Irene rose to ask Question number 7. She was dressed for martyrdom in a tasteful rust- brown costume, smart velvet hat, pearl necklace and ear-rings, and navy-blue accessories (it was not for nothing that I used to be Fashion Editor of Hansard); but horrid Mr. Maudling ran away with the faggots just when the Opposition was leaning forward to toast marshmallows at the blaze. 'My noble Friend,' he said, 'is considering the representations my hon. Friend has made to him.' It did not sound like the fall of Jericho's ramparts, but those skilled in listening between the lines knew that Dame Irene was victorious. Her point had been that ex-municipal employees of the gas and electricity authorities were being treated more favourably, in the matter of pen- sions, than ex-company employees. Mr. Maud- ling's noble Friend has now decided to tidy up the discrepancy, and Dame Irene marched down the House with the air of one who has diced with death and thrown a double-six.

Half an hour later Mr. Butler was up to his tricks again. He slipped in just before the Prime Minister's questions were reached, tanned from Ghana's sun and wearing a summery suit and a bright blue shirt. Asked by Colonel Marcus Lipton whether the Prime Minister was not try- ing, on the question of doctors' pay, to tiptoe out of an impossible situation, Mr. Butler replied that he wasn't, and that in any case the Prime Minister was not nearly so flat-footed as Colonel Lipton. Laugh? They nearly died. For what seemed like several minutes the laughter went on, renewed in peal after peal as hon. members who had got the point explained it to hon. members who had not. Order papers slipped from fingers too weak to hold them any longer, strong men on the front Government bench below the gangway got up and stamped on the carpet, Mr. Alfred Robens repeatedly slapped his knees so hard that I began to fear he would give himself severe cartilage trouble, tears coursed unchecked down faces that had not laughed so much since the heyday of Dan Leno, and Mr. Butler sat in the midst of it smiling modestly like a man who has just made a really good joke. Nobody, it seemed, had noticed that the remark had been another of the Lord Privy Seal's famous left-handed compliments. So the Prime Minister is not nearly so flat-footed as Colonel Lipton? I am sure Mr. Macmillan is most grateful to Mr. Butler for reassuring the House in this fashion.

Aching, they got on with the Army Estimates. The Defence White Paper being still a fortnight away, the debate wore to some extent an air of unreality, strengthened by the fact that Mr. Hare opened it. Mr. Hare is a convincing demonstra- tion of Berkeley's theory of the non-existence of matter, for the moment he opens his mouth I become quite certain that he is not really there at all; nor, to judge from the speed with which the House empties as he begins, am I alone in this view. There is nothing exceptional, mind you, in Mr. Hare's being where he is. Mr. Wilfred Fien- burgh, in his first despatch-box performance, was highly impressive, exacting tributes in the subse- quent debate from the unlikeliest people. But when the Labour Party is returned to power will Mr. Fienburgh be Minister for War? Not on your life; the post will go to Mr. Bellenger, and I shall be compelled to say the same sort of thing about him. We pay MPs a wage that would be scorned by anyone capable of running an espresso coffee- bar with even a moderate degree of success; si monumentern requiris, circumspice.

Next day they were debating herrings. Now I know a great deal about herrings, and in conse- quence there is only one man in Parliament whom I would listen to an the subject with respect and interest, confident that I could learn something from him. Sir Robert Boothby, however, was not expected to speak for some hours, so I strolled across to the House of Lords, much as a philistine with half an hour to kill in Bloomsbury might slip into the British Museum for a glance at the Elgin Marbles.

And a finer collection of Elgin Marbles than their Lordships I never expect to see. The studded red leather, the brass scroll-work, the devastating ugliness of the ceiling, the crested cushion on the Throne, the mobile hearing aids fixed to every seat, the Lord Chancellor's stomach, flowing gently over his knee-breeches—it makes a setting uniquely appropriate for the leisurely, somnolent, elaborate, inconceivably purposeless goings-on. Here a deaf Earl, there a gouty Bishop, content, not content, is it your pleasure, my noble Friend, amendment by leave withdrawn—on and gently on it went, until the inevitable happened and I fell into a sound and dreamless sleep. I awoke refreshed, to be rewarded by the sight of Lord Woolton entering, peering about him so like a short-sighted pawnbroker that I had half a mind to rush down the stairs and pop my cuff-links.

And yet, and yet. . . . The proceedings of their Lordships' House may not tend to any productive outcome; but they have a fascination entirely lacking from those of their rather more elected colleagues. Like the Tsarist Princes and Generals who became taxi-drivers and waiters in Paris after the Revolution, they exact admiration from us even as we shake our heads, with sad smiles, at the hopelessness of their case. The flag flies bravely from the masthead, though there is no breeze to make it stir. The widely-held belief that the House of Lords is a debating chamber of immensely high standards is no doubt a myth; but for entertainment tinged with nostalgia there is nothing like it. Besides, when they say a Bill is a bad Bill they give the impression that they mean it, and are not say.ing it because the Party expects them to. They talk their own nonsense in the House of Lords, and I for one salute them for it, though I think I shall not soon go back there.