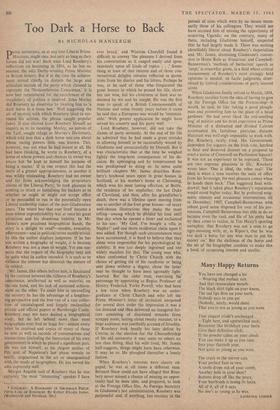 Too Dark a Horse to Back

BY NICHOLAS MANSERGH PRIME MINISTERS, or at any rate Liberal Prime Ministers, might race, but only so long as their horses did not win! Such were Lord Rosebery's reflections on becoming in 1894, as he has re- mained, the only Derby-winning Prime Minister in British history. But if at the time the achieve- ment served chiefly to disturb the large and articulate section of the party which claimed to represent the 'Nonconformist Conscience,' it is now best remembered for the enrichment of the vocabulary of politics it inspired. John Morley did Rosebery no disservice by likening him to 'a dark horse in a loose box.' Well suggesting the air of mystery with which Rosebery liked to sur- round his actions, the phrase caught popular fancy. It also elicited from Rosebery himself an inquiry as to its meaning. Morley, no patron of the Turf, sought refuge in Murray's Dictionary, which told him that a dark horse was one about whose racing powers little was known. This, however, was not what he had meant at all. He had been thinking, he wrote to Rosebery, of a horse of whose powers and chances its owner was aware but 'he kept to himself his purpose of being a starter.' If in one respect this had the merit of a greater appropriateness, in another it was wildly misleading. Rosebery had no owner and far from acknowledging the proprietary claims of the Liberal Party, he took pleasure in nothing so much as tantalising his backers as to whether he might or might not accept office or be persuaded to run in the perennially open Liberal leadership stakes of the post-Gladstonian years. 'The wisest boy that ever lived' became a man whose unpredictability was at once his great attraction and his disastrous liability. In Mr. James's now practised biographical hands, the story is a delight to read*—erudite, evocative, effervescent—and in political terms mostly trivial. In this the author displays judgment. If he has not written a biography of weight, it is because RoSebery was not a man of weight. Yet one sus- pects that the impact of the biography may not be quite what its author intended. It is such as to eithance the interest but diminish the stature of its subject.

Mr. James, like others before him, is fascinated by the contrast between the richness of Rosebery's inheritance, intellectual as well as material, on the one hand, and his lack of sustained achieve- nient on the other. To assist him in unravelling the mystery he has the advantage of a lengthen- ing perspective and the free run of a vast collec- tion of uncatalogued and largely unclassified private and official papers at Barnbougle Castle. Rosebery may not have desired a biographical study, but he left behind more than most biographers ever find or hope for—almost every letter he received and copies of many of those he sent as well as records of conversations and transactions (including the formation of his own government) in which he played a significant part.

He was not himself, as his elegant studies of Pitt and of Napoleon's last phase remain to testify, unpractised in the art or unacquainted with the needs of biographers. He has served his own supremely well.

Margot Asquith said of Rosebery that he was certainly 'the most "interesting" speaker I have * ROSEBERY: A BIOGRAPHY OF ARCHIBALD PHILIP, FIFTH EARL OF ROSEBERY. By Robert Rhodes James. (Weidenfeld and Nicolson, 50s.) ever heard,' and Winston Churchill found it difficult to convey 'the pleasure I derived from his conversation as it ranged easily and spon- taneously upon all kinds of topics. . . .' Some- thing at least of that interest and of those con- versational delights remains reflected in quota- tions from his diaries and his letters. Perhaps he was, as he said of those who frequented the great houses in which he passed his life, clever but not wise, but his cleverness at least was re- deemed by wit and by insight. He was the first man to speak of a British Commonwealth of Nations and some twenty years before it came he said that a European war would be 'intermin- able.' With greater application he might have served his country and his party well.

Lord Rosebery, however, did not take the claims of party seriously. At the end of his life he admitted that he had made a great mistake in allowing himself to be successfully wooed by Gladstone and unsuccessfully by Disraeli. But it was characteristic that at the time he weighed lightly the long-term consequences of his de- cision. By upbringing and by temperament he was predisposed to doing so. In some quite brilliant chapters Mr. James describes Rose- bery's boyhood years spent in great houses in Scotland, at his mother's home at Chevening, which won his most lasting affection, at Battle, the residence of his stepfather, the last Duke of Cleveland, and then, after his grandfather's death, there was a lifetime spent moving from one to another of the four great houses—of many well-chosen illustrations they make the most telling—among which he divided his time until that day when he opened a letter and exclaimed to his son: 'My God, I've bought a villa in Naples!' and one more residential claim upon it' was added. Yet though such circumstances must' have accentuated, it is hard to believe that they alone were responsible for his psychological in- stability. It was too deeply ingrained and too widely manifest for that. The young man who,' when confronted by Christ Church with the choice of getting rid of his racehorse or being, sent down without a degree, chose the latter may be thought to have been agreeably light- hearted. But the older man, exercising his'

patronage by appointing as Regius Professor of History Frederick Yorke Powell, who had been a law tutor when Rosebery was an under- graduate at Christ Church and who left the Prime Minister's letter of invitation unopened for several days under the impression it was a tax demand and then delivered an inaugural lec- ture consisting of disjointed remarks from scrappy notes, lasting about twenty minutes, to a huge audience, was justifiably accused of frivolity.

If Rosebery took hardly his later defeat by Curzon in the election for the Chancellorship of his old university it may seem to others no less than fitting. Had his wife lived, Mr. James half-suggests, things might have been otherwise. It may be so. He ploughed thereafter a lonely furrow.

When Rosebery's interests were closely en- gaged, he was at all times a different man.

Bernard Shaw could not have alleged that Rose- bery never missed a chance of missing an oppor- tunity had he been able, and prepared, to look at the Foreign Office files. As Foreign Secretary in Gladstone's last administration, Rosebery was purposeful and, if anything, too resolute in the pursuit of aims which were by no means neces- sarily those of his colleagues. They would not have accused him of missing the opportunity of acquiring Uganda; on the contrary, many of them, including Gladstone himself, suspected that he had largely made it. There was nothing identifiably liberal about Rosebery's imperialism and Mr. James, dismissing Gladstone's conver- sion to Horne Rule as 'disastrous' and Campbell- Bannerman's 'methods of barbarism' speech as `inept,' is somewhat given, in a field where critical reassessment of Rosebery's most strongly held opinions is needed, to facile judgments deter- mined by limited considerations of party interest alone.

When Gladstone finally retired in March, 1894, Rosebery recoiled from the idea of having to give up the Foreign Office for the Premiership'—it would, he said, be like 'taking a good plough- man and promoting him to the place of a head gardener.' He had never liked 'the evil-smelling bog' of politics and his brief experience as Prime Minister of a distracted and divided Cabinet accentuated his fastidious patrician distaste. Harcourt was well-nigh impossible to work with. But Rosebery rarely tried. His Government, dependent for support on the Irish vote, lurched to final and deserved disaster on a proposal to erect a statue of Cromwell on Parliament Square! It was not an experience to be repeated. 'There are two supreme pleasures in life,' Rosebery wrote later. 'One is ideal, the other real! The ideal is when a man receives the seals of office from his Sovereign, the real pleasure comes when he hands them back.' That suggested final with- drawal; had it taken place Rosebery's reputation would stand higher today. But he preferred enig- matic silences and occasional interventions till in December, 1905; Campbell-Bannerman with robust good sense disposed for ever of his pre- tensions. Campbell-Bannerman was able to do so because even the rank and file of his party had by then come to realise, in Tim Healy's sporting metaphor, that Rosebery was not a man to go tiger-shooting with; or, in Ripon's, that he 'was too dark a horse for any wise man to put his money on.' But the darkness of the horse and the art of the biographer combine to make this a book of surpassing interest and quality.