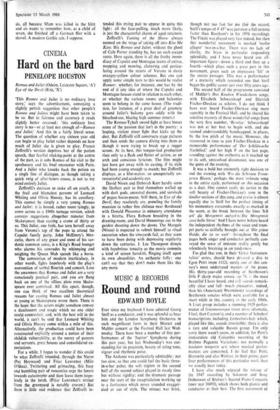 Hard on the bard

Romeo and Juliet (Odeon, Leicester Square, 'A') Eye of the Devil (Ritz; 'X') `This Romeo and Juliet is no ordinary love story,' says the advertisement, conveying a slightly pettish suggestion that other people's Romeo and Juliets might have been taken to be so. But in fairness and accuracy it reads slightly better reversed: 'this ordinary love story is no—or at least not enough of—Romeo and Juliet.' And this in a fairly literal sense. The question of whether any sixteen year old can begin to play Juliet rather depends on how much of Juliet she is given to play. Franco Zeffirelli's version deprives her of the potion speech, that fearful sticking-point at the centre of the part, as it robs Romeo of his visit to the apothecary and his final encounter with Paris. And a Juliet who knocks back the potion on a single line of dialogue, as though taking a quick swig of after-hours cocoa, is not to my mind entirely Juliet.

Zeffirelli:s decision to stake all on youth, in the frail and blameless persons of Leonard Whiting and Olivia Hussey. has its corollary. This cannot be simply a very young Romeo and Juliet: it is bound, rather more tyingly, to come across as a 1960s teenage version, which conveys suggestions altogether remoter from Shakespeare than casting a crone of thirty or so. This Juliet, one feels, has torn herself away from Verona's top of the pops to attend the Capulet family party. John McEnery's Mer- cutio, shorn of any grace and most of his sar- donic common sense, is a King's Road lounger who alarms his comrades by whinnying and neighing the' Queen Mab speech like a horse.

The convention, of modern inarticulacy, in other words, fights hopelessly with the play's convention of verbal flourish and conceit. Lose the awareness that Romeo and Juliet are a very consciously poetical pair, and you are flung back on one of the silliest plots even Shake- speare ever contrived. All this apart, though, one cap think of two excellent theiiretical reasons for casting Romeo and Juliet almost as young as Shakespeare wrote them. There is the hope that the actors might somehow convey a dazzlement and magic which no one older could counterfeit; and, with the best will in the world, it can't be said that Leonard Whiting and Olivia Hussey come within a mile of this. Alternatively, the production could have been constructed explicitly around a notion of their childish vulnerability, at the mercy of parents and servants, great houses and consolidated ex- pectations.

For a while, I began to wonder if this could be what Zeffirelli intended, through the Nurse (Pat Heywood) and Friar Lawrence (Milo O'Shea). Twittering and grimacing, this busy and bumbling pair of romantics urge the lovers towards catastrophe and then leave them hope- lessly in the lurch. (Friar Lawrence's retreat from the graveyard is notably craven.) But there is little real evidence that Zeffirelli in-

tended this trying pair to appear in quite this light: all the face-pulling, much more likely, is just the characterful charm of aged retainers.

Zeffirelli's Taming of the Shrew always seemed on the verge of taking off into Kiss Me Kate. His Romeo and Juliet, without the ghost of Cole Porter standing by, has no such escape route. Here again, there is all the frothy imme- diacy of Capulet and Montague teams of extras, mopping and mowing, clattering and gesticu- lating around the streets of Verona in dusty orangey-yellow colour schemes. But one can apply some simple tests to this would-be realist Romeo: whether, for instance, one has by the end of it any idea of where the Capulet and Montague houses stand in relation to each other, or whether the various rooms and balconies seem to belong in the same house. (The tradi- tion, for instance, of a great deal of greenery around Juliet's balcony goes oddly with the bleached-out, blazing high summer streets.)

The Romeo-Tybalt sword fight at least looses some of the passion that isn't in the poetry: a leaping, violent street fight that kicks up the dust. But Zeffirelli still constructs stage pictures and then sends the camera diving into them as though it were trying to break up a rugger scrum. At its best, this longue-tied production rises only to a flash and flutter of action, or an arch and conscious lyricism. The film might just have got away with its casting, if its style had been young enough to match; but Zeffirelli displays, as a film-maker. an unexpectedly un- resourceful and academic eye.

David Niven and Deborah Kerr hardly seem the likeliest pair to find themselves walled up with dark gods, ancestral dooms, and survivals of pagan hocus-pocus. Still there, in Eye of the Devil, they resolutely are, prowling the family mansion (a rather fine château near Bordeaux) with Donald Pleasence in minatory attendance in a biretta, Flora Robson brooding in the drawing-room, and David Hemmings out in the garden shooting down the doves. The Marquis (Niven) is expected to submit himself to ritual execution when the vineyards fail, as they seem to have been doing with depressing regularity down the centuries. J. Lee Thompson directs with lugubrious tenacity as the movie commits a kind of screen harakiri, flinging 'itself upon its own absurdities. An authentic folly: one can't say that they don't make them like this any more.