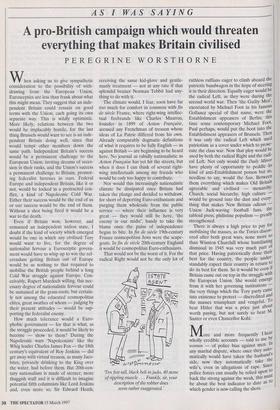 AS I WAS SAYING

When asking us to give sympathetic consideration to the possibility of with- drawing from the European Union, Eurosceptics are less than frank about what this might mean. They suggest that an inde- pendent Britain could remain on good terms with the Union, each going its own separate way. This is wildly optimistic. More likely, relations between the two would be implacably hostile, for the last thing Brussels would want to see is an inde- pendent Britain doing well, since that would tempt other members down the same path. Independent Britain's success would be a permanent challenge to the European Union, inviting dreams of seces- sion in their ranks, and the Union's success a permanent challenge to Britain, promot- ing federalist heresies in ours. Federal Europe and independent Britain, like it or not, would be locked in a protracted con- flict, a kind of Napoleonic Cold War. Either their success would be the end of us or our success would be the end of them. Without a shot being fired it would be a war to the death.

Even if Britain won, however, and remained an independent nation state, I doubt if the kind of society which emerged would be one in which any civilised Tory would want to live, for the degree of nationalist fervour a Eurosceptic govern- ment would have to whip up to win the ref- erendum getting Britain out of Europe would be as nothing to that required to mobilise the British people behind a long Cold War struggle against Europe. Con- ceivably, Rupert Murdoch willing, this nec- essary degree of nationalistic fervour could be sustained at the grass-roots, but certain- ly not among the educated cosmopolitan elites, great swathes of whom — judging by their present attitudes — would be sup- porting the federalist enemy.

How much tolerance would a Euro- phobic government — for that is what, as the struggle proceeded, it would be likely to become — show to them? During the Napoleonic wars `Napoleonists' like the Whig leader Charles James Fox — the 18th century's equivalent of Roy Jenkins — did get away with virtual treason, as many Jaco- bites, privately drinking to the King over the water, had before them. But 20th-cen- tury nationalism is made of sterner, more thuggish stuff and it is difficult to imagine potential fifth columnists like Lord Jenkins and, even more so, Sir Edward Heath, receiving the same kid-glove and gentle- manly treatment — not at any rate if that splendid bruiser Norman Tebbit had any- thing to do with it.

The climate would, I fear, soon have far too much for comfort in common with fin de siecle France, where right-wing intellec- tual firebrands like Charles Maurras, founder in 1899 of Action Francaise, accused any Frenchman of treason whose ideas of La Patrie differed from his own. Already comparably dogmatic definitions of what it requires to be fully English — as against British — are beginning to be heard here. No journal as rabidly nationalistic as Action Frangaise has yet hit the streets, but when it does I can think of several right- wing intellectuals among my friends who would be only too happy to contribute.

Nor would this increasingly nationalistic climate be dissipated once Britain had taken the plunge and decided to withdraw, for short of deporting Euro-enthusiasts and purging them wholesale from the public service — where their influence is very great — they would still be here, 'the enemy in our midst', handy to take the blame once the pains of independence began to bite. In fin de siecle 19th-century France cosmopolitan Jews were the scape- goats. In fin de siecle 20th-century England it would be cosmopolitan Euro-enthusiasts.

That would not be the worst of it. For the radical Right would not be the only lot of Ten feet tall, black belt in judo, 40 stone of rippling muscle . . . Frankly, sir, your description of the robber does seem rather exaggerated.' ruthless ruffians eager to climb aboard the patriotic bandwagon in the hope of steering it in their direction. Equally eager would be the radical Left, as they were during the second world war. Then 'the Guilty Men', excoriated by Michael Foot in his famous Gollancz special of that name, were the Establishment appeasers of Berlin; this time some contemporary Michael Foot, Paul perhaps, would put the boot into the Establishment appeasers of Brussels. Then it was only the radical Left which used patriotism as a cover under which to prose- cute the class war. Now that ploy would be used by both the radical Right and the radi- cal Left. Not only would the Daily Mirror have plenty of opportunity to peddle its kind of anti-Establishment poison but so, needless to say, would the Sun. Between them everything which makes Old Britain agreeable and civilised — monarchy, Church, social hierarchy, high culture — would be ground into the dust and every- thing that makes New Britain odious — Union Jack-waving football fans, the tabloid press, philistine populism — greatly strengthened. There is always a high price to pay for mobilising the masses, as the Tories discov- ered after both great wars, none more so than Winston Churchill whose humiliating dismissal in 1945 was very much part of that price. Having patriotically done their best for the country, the people under- standably expect their country in return to do its best for them. So it would be even if Britain came out on top in the struggle with the European Union. She would emerge from it with her governing institutions — the very things which the Tory party came into existence to protect — discredited and the masses triumphant and vengeful. To beat Hitler that was a price just about worth paying, but not surely to beat M. Santer or even Chancellor Kohl.

More and more frequently I hear wholly credible accounts — told to me by women — of police bias against men. In any marital dispute, where once they auto- matically would have taken the husband s side, now they automatically take the wife's, even in allegations of rape. Since police forces can usually be relied upon to back the strong against the weak, this must be about the best indicator to date as to which gender is now calling the shots.