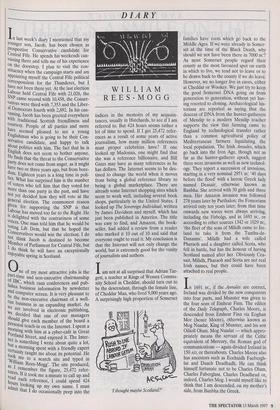 In last week's diary I mentioned that my Younger son, Jacob, has been chosen as prospective Conservative candidate for Central Fife. He spends his weekends can- vassing there and tells me of his experience on the doorstep. I plan to visit the con- stituency when the campaign starts and am appointing myself the Central Fife political correspondent for the Thunderer, but I have not been there yet. At the last election Labour held Central Fife with 21,026, the SNP came second with 10,458, the Conser- vatives were third with'7,353 and the Liber- al Democrats fourth with 2,892. In his can- vassing, Jacob has been greeted everywhere with traditional Scottish friendliness and courtesy. People of all parties and more have seemed pleased to see a young Englishman who is going to be their Con- servative candidate, and happy to talk about politics with him. The fact that he is English does not seem to bother anyone. He finds that the threat to the Conservative Party does not come from anger, as it might have two or three years ago, but from bore- dom. Eighteen years is a long time in poli- ties. What has surprised him is the number of voters who tell him that they voted for more than one party in the past, and have not yet decided how they will vote at the general election. The commonest reason given for supporting the SNP is that Labour has moved too far to the Right. He is delighted ughted with the contrariness of some voters. One man told him that he would be voting Lib Dem, but that he hoped the Conservatives would win the election. I do not think Jacob is destined to become Member of Parliament for Central Fife, but I do think he will have an exceptionally enjoyable spring in Scotland.

One of my most attractive jobs is the part-time and non-executive chairmanship ,(3.f IBC, which runs conferences and pub- lishes business information by newsletter be computer screen. It is very pleasant to ue the non-executive chairman of a well- run business in an expanding market. As we are involved in electronic publishing, we decided that one of our managers should give each member of the board a Personal teach-in on the Internet. I spent a morning with him at a cyber-café in Great Portland Street, and enjoyed it. The Inter- net is something I write about quite a lot, but a morning spent with a friendly expert certainly taught me about its potential. He t , ookme to a search site and typed in William Rees-Mogg'. The site produced, as I remember the figure, 25,472 refer- ences. If it took me a minute to call up and read each reference, I could spend 424 hours looking up my own name. I must admit that I do occasionally peep into the WILLIAM REES-MOGG indices in the memoirs of my acquain- tances, usually in Hatchards, to see if I am referred to. But 424 hours seems rather a lot of time to spend. If I get 25,472 refer- ences as a result of some years of active journalism, how many million references must proper celebrities have? If one looked up Madonna, one might find that she was a reference billionaire, and Bill Gates may have as many references as he has dollars. The Internet seems to be des- tined to change the world when it moves from being a global reference library to being a global marketplace. There are already some Internet shopping sites which seem to work well, including several book shops, particularly in the United States. I looked up The Sovereign Individual, written by James Davidson and myself, which has just been published in America. The title was easy to find, and Amazon, the book- seller, had added a review from a reader who marked it 10 out of 10 and said that everyone ought to read it. My conclusion is that the Internet will not only change the world, but is extremely good for the vanity of journalists and authors.

Iam not at all surprised that Adrian Tar- gett, a teacher at Kings of Wessex Commu- nity School in Cheddar, should turn out to be the descendant, through the female line, of Cheddar Man, who lived 9,000 years ago. A surprisingly high proportion of Somerset `I thought maybe Scotland?' families have roots which go back to the Middle Ages. If we were already in Somer- set at the time of the Black Death, why should we not have been there in 7000 BO As most Somerset people regard their county as the most favoured spot on earth in which to live, we tend not to leave or to be drawn back to the county if we do leave. However, we no longer live in caves, either at Cheddar or Wookey. We just try to keep the good Somerset DNA going on from generation to generation, without yet hav- ing resorted to cloning. Archaeological his- torians are reported as saying that the descent of DNA from the hunter-gatherers of Mendip to a modern Mendip teacher supports the view that farming came to England by technological transfer rather than a common agricultural policy of Mediterranean farmers liquidating the local population. The Irish Annales, which go back into the Iron Age, though not as far as the hunter-gatherer epoch, suggest there were invasions as well as new technol- ogy. They report a succession of invasions, starting in a very nominal 2951 BC '40 days before the flood' with a heroic Greek lady named Deasair, otherwise known as Banbha. She arrived with 50 girls and three men. Her Amazon invasion was followed 278 years later by Parthalon; the Fomorians arrived only ten years later; from that time onwards new waves were always arriving, including the Firbolgs, and in 1693 BC, or according to other sources 1342 or 1029 BC, `the fleet of the sons of Milidh came to Ire- land to take it from the Tuatha-de- Dananns'. Milidh had a wife called Pharaoh and a daughter called Scota, who fell in battle, but has the honour of having Scotland named after her. Obviously Cea- sair, Milidh, Pharaoh and Scota are not real Irish names, but they could have been attached to real people.

In 1691 sc, if the Annales are correct, Ireland was divided by the new conquerors into four parts, and Munster was given to the four sons of Emhear Finn. The editor of the Daily Telegraph, Charles Moore, is descended from Emhear Finn via Eoghan Mor (hence Moore), otherwise known as Mog Nuadat, King of Munster, and his son Oilioll Olum. Mog Nuadat -- which appro- priately means the servant of the Celtic equivalent of Mercury, the Roman god of communications — again divided Ireland in 150 AD, or thereabouts. Charles Moore also has ancestors such as Eochaidh Faebergh- las and Duach Deadhadh. He can think himself fortunate not to be Charles Olum, Charles Faberglass, Charles Deadhead or, indeed, Charles Mog. I would myself like to think that I am descended, on my mother's side, from Banbha the Greek.