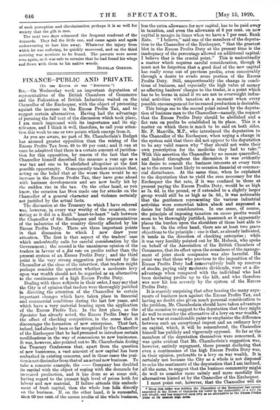 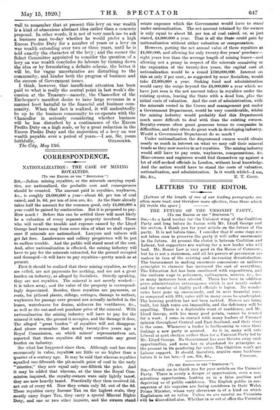 SIR,—On Wednesday week an important deputation of representatives of the British Chambers of Commerce and the Federation of British Industries waited on the Chancellor of the Exchequer, with the object of protesting against the increase in the Excess Profits Tax, and to suggest certain alternatives. Having had the advantage of perusing the fall text of the discussion which took place, I am much impressed with its importance and its sig- nificance, and I think it well, therefore, to call your atten- tion this week to one or two points which emerge from it.

As you are aware, no part of Mr. Chamberlain's Budget has aroused greater opposition than the raising of the Excess Profits Tax from 40 to 60 per cent.; and it can at once be admitted that there is a certain amount of justifica- tion for this opposition, by reason of the fact that the Chancellor himself described the measure a year ago as a war tax and one to be abolished altogether at the first possible opportunity. Consequently traders maintain that, acting on the belief that at the worst there would be no increase in the Excess Profits Tax, they have gone ahead with business developments and are now badly hit by the sudden rise in the tax. On the other hand, as you know, the occasion has b'een made one for attacks on the Chancellor of a general character and violence certainly not justified by the actual facts.

I think, however, that insufficient attention has been paid to what is really the central point in last week's dis- cussion at the Treasury—namely, the Chancellor of the Exchequer's manifest desire to raise large revenues in a manner least harmful to the financial and business com- munity. When that fact is realized, it will undoubtedly be up to the business community to co-operate with the Chancellor in seriously considering whether business will be leas disturbed by a continuance of the Excess Profits Duty on a -high scale, or by a-great reduction in the Excess Profits Duty and the imposition of a levy on war wealth payable over a period of years.—I am, Sir, yours