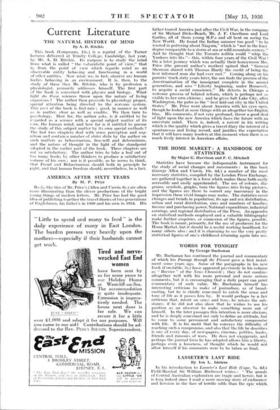 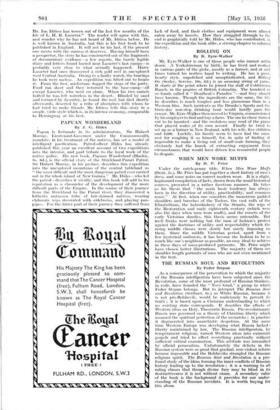 In his introduction to Lasseter's Last Ride (Cape, 7s. 6d.) Field-Marshal Sir William Birdwood writes : " The annals of Central Australian exploration are tragic and heroic, but it is long indeed since I read a more moving story of endurance and heroism in the face of terrific odds than the epic which.

Mr. Ion Idriess has woven out of the last few months of the life of L. H. B. Lasseter." The reader will agree with this, and wonder why he has not heard of Mr. Idriess before. He is well known in Australia, but this is his first book to be published in England. It will not be his last, if the present one meets with the success it deserves. Having himself been a prospector, the story he has constructed out of the fragments of dOeunientary evidence—a few reports, the barely legible diary and letters foUnd buried near Lasseter's last canipsis probably very close to what actually happened. .1-Grry Lasseter had once discovered a rich gold reef in unexplored west Central Australia. Owing to a faulty watch, the bearings he took were useless. An expedition was fitted out to locate it. From the first, misfortune dogged the steps of the party. Food ran short and they' returned to the base-campall except Lasseter, who went on alone. When his two camels bolted he was left waterless 'in the desert. Blinded by sand and tortured by dysentry, he found the reef, but died shortly afterwards, deserted by a tribe of aborigines with whom he had tried to make friends. Mr. Idriess tells this story in a simple, virile style which is, in its intense economy, comparable to Hemingway at his best.