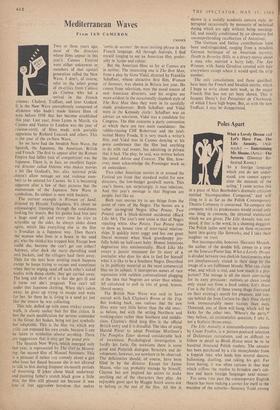 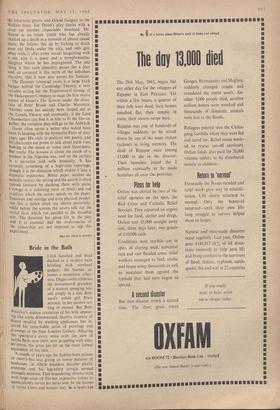 'IN a foreign language which you do not under- stand, you cannot appre- ciate the nuances of the acting.' I came across this in a piece of Max Beerbohm's dramatic criticism entitled Incomparables Compared,' and will cling to it as far as the Polish Contemporary Theatre Company is concerned. To compare the company with its predecessors would reveal only one thing in common, the abysmal translation which we are given; The Life Annuity was ren- dered, if that is the word, in a shaming doggerel. The Polish ladies next to me on these occasions burst into gaiety like fireworks, and I take their laughter on trust.

Not incomparable, however. Slavomir Mrozek, the author of the double bill, comes to a stop on the Ionesco-Pinter line. What a Lovely Dream is divided between two clerkish functionaries who are simultaneously visited in their sleep by the image of a sex-fulfilment blonde. Who can claim what, and which is real, and how much is a pro- jection? The mirage is all the more convincing for its zany precision: outlines so clean could only stand out from a hard centre. Let's Have Fun is the frolic of three young thugs frustrated on their evening's search for pleasure, and ton- ups behind the Iron Curtain (as their films show) look immeasurably more vicious than ours. Thwarted, one of them will hang, which will be kicks for the other two. 'Where's the party?' they bellow, an existentialist question, I take it, not a Stalinist throw-away.

The Life Annuity, a nineteenth-century classic by Count Fredro, is a picture-postcard selection of Dickensian caricatures, and as difficult to follow in detail as Bleak House must be to its hundred thousand Polish readers. The annuity has been purchased by a vile moneylender from a foppish rake who leads him several dances, ballooning, duelling, and taking his girl. Far from boring, it was often curious in that way which stiffens the resolve to broaden one's cul- ture and learn foreign languages next winter.

For some time past the contemporary English theatre has been making a corner for itself in the macabre of the suburbs—Sweeney Todd among the laburnum groves and Grand Guignol in the Welfare State. Joe Orton's play marks with a cross yet another respectable threshold. Mr. Sloane is an inane youth who has already chalked up a death in a moment of almost casual Panic. He follows this up by kicking to death Poor old Dada under the sofa, and only gets away with it after some sexual bargaining with a son who is a queer and a nymphomaniac daughter whom he has impregnated. The odd thing is that such absurdity passes for a play and, so cornered is this myth of the suburban macabre, that it now also passes for humour.

The Dontnar rehearsal room is a large brick hangar behind the Cambridge Theatre, a very suitable setting for the Experimental Group of the Shakespeare Company to stage the first twelve scenes of Genet's The Screens under the direc- tion of Peter Brook and Charles Marowitz. Another scene has already been shaped out at the Lamda Theatre and eventually, if the Lord Chamberlain can find it in him to fit the bits to- gether, the complete play will go to the Aldwych.

Genet often seems a writer who would have been in keeping with the Symbolist Paris of sixty Years ago. His style is poeticist not poetic, and his characters are prone to talk about palm trees bowing to the moon or some such literariness. But really The Screens is about the death of a woman in the Algerian war, and on the surface IS a narrative told with humanity. It has certainly something of a high-class reportage, though it is the direction which makes it int,o a dramatic experience. White paper screens do actually convey the setting and the action is often carried forward by daubing them with paint. Carnage is a sickening mess of black and red crudities which the actors splash on the paper. Emotions and outrage and even physical proper- ties like a stolen clock are shown pictorially, While before the screens the actors talk out the trivial facts which run parallel to the dreadful war. The direction has given life to the play and it is essential that the irrelevancies of the censorship are not imposed to nip this experiment.