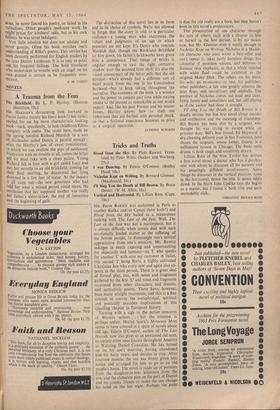 , A Trauma from the Fens MR. HARTLEY'S devastatin g look

forward in Facial Justice (surely his finest book?) has rather Wiled for me his more characteristic looking back—back, specifically, to lush childhood Edens Complete with snake. The recall here, made by the ageing novelist Richard Mardick to a sort of Alcibiades called Denys, is painful enough: after the Hartley's jam of sweet reminiscence, in which we can swallow the pips of adolescent frustration with no trouble at all, comes the bitter Pill we must take with a clean palate. Young Richard fell in love with a girl called Lucy and met her secretly in an old brickfield; coming for their final meeting, he discovered her lying drowned in a few feet of water. At the inquest it all came out—the new governess who had told her what a missed period could mean, the revelation that her supposed mother was really her father's sister-in-law, the end of innocence and the beginning of guilt. The distinction of this novel lies in its form and in its choice of symbols. We're not allowed to forget that the story is told to a particular audience—a young man who incarnates the values and judgments of an age in which promises are not kept. It's Denys who reminds Mardick that, though the Rookland Brickfield let him down, his father's brickworks have given him a competence. That image of bricks is angular enough to cast the right corrective shadow over the doomed little idyll; it's also the visual counterpart of the bitter pills that the old novelist—who's already had a different sort of heart attack from the one in his Lincolnshire boyhood—has to keep taking throughout the narrative. The economy of the book is a wonder and the power to conjure past time while staying awake to the present as remarkable as one would expect. And, like his peer Forster and his master James, Hartley knows how to shaft out aphorisms that are barbed with personal shock, so that a fictional experience becomes as privy as a surgical operation.-