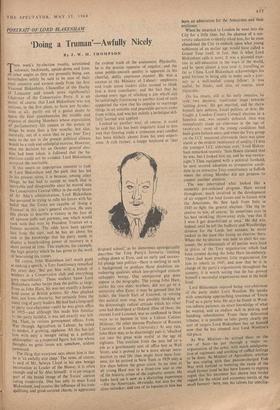 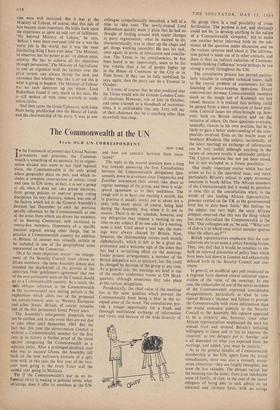 THIS week's by-election results, scrutinised sideways, backwards, upside-down and from all other angles as they are presently being, can nevertheless safely be said to be sure of their most attentive and earnest study from the first Viscount Blakenham, Chancellor of the Duchy Of Lancaster and (much more significantly) Chairman of the Conservative Party. It is no secret, of course, that Lord Blakenham' was not anxious, in the first place, to have any by-elec- tions at all: partly out of a genial desire to Spare the four constituencies the trouble and expense of electing Members whose expectation of parliamentary life cannot in the nature of things be more than a few months; but also, naturally, out of a sense that to put four Tory seats to the test in the present political climate Would be a rash and unhelpful exercise. However, Once the decision for an October general elec- tion had been taken, it followed that the by- elections could not be avoided. Lord Blakenham accepted the inevitable.

If this seems an appropriate moment to look at Lord Blakenham and the path that has led to his present cares, it is because, among other things, he has had to accept so much that is inevitable and disagreeable since he moved into the Conservative Central Office in the early hours of Sir Alec's administration. Lord Blakenham has persisted in trying to rally his forces with his belief that the Tories are capable of 'doing a Truman' in this year's general election. He uses this phrase to describe a victory in the face of all opinion polls and portents, one which would rank with that won by President Truman on a famous occasion. The odds have been against him from the start, and he has set about his task in the knowledge that his party needs to display a breath-taking power of recovery in a short period of time. This explains, for example, the high priority which he has given to the work of heartening his troops.

`Of course, John Blakenham isn't much good at making a speech,' a Tory functionary remarked the other day. 'But put him with a bunch of Workers in a Conservative club and everything goes marvellously.' These workers know Lord Blakenham rather better than the public at large. Even as John Hare, his was not exactly a house- hold name in British politics. Sir Alec plucked him, not from obscurity, but certainly from the outer ring of party leaders. He had had a long spell as party vice-chairman—until he was given office in 1955—and although this made him familiar to the party faithful, it was not exactly star bill- ing. Then, in various government offices, from War through Agriculture to Labour, he toiled to modest, if growing, applause. All this has left him with only a meagre rating as a political Philosopher: as a respected figure, but one whose thoughts on great issues are, somehow, seldom canvassed.

The thirtg that everyone says about him is that he is 'an awfully nice chap.' The same, of course, I s said of Mr. Selwyn Lloyd in his new benign incarnation as Leader of the House; it is often enough said of Sir Alec himself: it is an integral part of the brand image of the Tories' current . ruling triumvirate. One has only to meet Lord Blakenham, and receive the influence of his tran- quillising and good-natured charm, to appreciate

the evident truth of the assessment. Physically, he is the precise opposite of angular, and the same pebble-smooth quality is apparent in his cheerful, deftly courteous manner. He was a success at the Ministry of Labour; employers and trade union leaders alike seemed to think him a born conciliator; and the fact that he showed every sign of relishing a job which can be torturingly frustrating to another kind of man supported the view that his impulse to rearrange things in an amiable and peaceable pattern came from within, and was hot merely a technique skil- fully learned and applied.

Looked at another way, of course, it could be said that life has been singularly kind to him and that (leaving aside a strenuous war) conflict has been blithely absent from his own experi- ence. A rich farmer, a happy boyhood at 'that

despised school,' as he sbmetimes apologetically describes the Tory Party's favourite training college down at Eton, and an early and success- ful plunge into politics—there is nothing in such a background to produce those doubtless un- endearing qualities which less-privileged citizens unhappily betray. One unexpected gap does appear in the biography. The young John Hare, unlike his two elder brothers, did not go to a university after Eton; it may be guessed that his father, the fourth Earl of Listowel, in vetoing this natural next step, was possibly thinking of the distressingly radical attitude which his other sons had developed at Oxford. (One of them, the current Lord Listowel, was so confirmed in these ways as to become in time a Labour Cabinet Minister; the other became Professor of Russian Literature at London University.) At any rate, John Hare was, as he disarmingly puts it, 'chucked out into the great wide world' at the age of eighteen. This eviction from the nest led to a job as a gentlemanly sort of office boy in Wall Street, and it proved to be a more abrupt intro- duction to real life than might have been fore- seen, for he arrived in New York in 1929 only a few days before the great crash. In no time at all young Hare was in a front-row seat at one of the historic crises of the capitalist system. He looks back on it now as a shattering experience —for the Americans, obviously, but also for the close onlooker; and one of its legacies to him has been an admiration for the Americans and their resilience.

When he returned to London he went into the City for a little time, but the absence of a uni- versity education evidently irked him, for he soon abandoned the City to embark upon what young noblemen of an earlier age would have called a Grand Tour (well, in fact, that is what Lord Blakenham calls it now). It was a planned exer- cise in self-education in the ways of the world, and he spent almost a year over it, travelling as far as China. Lord Blakenham acknowledges his good fortune in being able to make such a jour- ney as a well-heeled young fellow: it was useful, he thinks, and also, of course, most enjoyable.

On his return, still in his early twenties, he took two decisive, traditional steps towards 'settling down.' He got married, and he threw

himself into politics. Local politics, at first. He fought a London County Counicil election in a

hopeless seat, was soundly defeated, then was immediately made an alderman at the age of twenty-six: most of the young candidates had been given forlorn seats, and when the Tory group

on the LCC mustered afterwards there was some alarm at the evident imminence of senility. CI was the youngest LCC alderman ever,' Lord Blaken-

ham remarked recently. 'Sam Hoare claimed that he was, but I looked him up, and he was twenty- eight?) Thus equipped with a political foothold, he next secured adoption as prospective candi- date in an attractive Tory constituency in Suffolk where the sitting Member did not propose to , contest another election.

The war interrupted what looked like a smoothly pre-ordained progress. Hare served throughout, much involved in the development

of air support for land forces and in liaison with the Americans. He flew back from Italy in 1945 to fight the general election. The big in- centive to win, of course,' he sometimes says in his best twinkling, throw-away style, 'was that if

I won I got demobilised at once.' He did win.

Indeed, until he left the Sudbury and Woodbridge division for the Lords last autumn, he never looked in the least like losing an election there.

When the by-election was held 'to elect his suc- cessor, the professionals of all parties were loud in praise of the Tory organisation which had been created during the John Hare incumbency. There had been precious little organisation for him to inherit in 1945, and now that he is in charge of the party's organisation throughout the country, it is worth noting that he has proved himself a successful organisation man at the local level.

Lord Blakenham enjoyed being vice-chairman of the party under Lord Woolton. He speaks with something approaching reverence of 'Uncle Fred' as a party boss. He says he found in Woot- ton infinite patience, an exact knowledge of what he wanted, and an endless skill in picking and handling subordinates. From these deferential tributes, it is possible to infer pretty clearly the sort of targets Lord Blakenham has set himself now that he has stepped into Lord Woolton's old place.

As War Minister--he arrived there on the eve of Suez—he put through a major re- organisation of the army, with much amalgama- tion of regiments and soothing of ruffled feelings to be done. As Minister of Agriculture, whether he was coping with that passion-charged Fish War with Iceland or boosting the cause of the small farmer (and he has been known to express regret that his successor has shown less tender regard for the social and economic merits of the small farmer)—here, too, his talents for concilia-

tion were well exercised. But it was at the Ministry of Labour, of course, that this side of him became most important. He looks back upon the experience as upon an odd sort of fulfilment. 'My beloved Ministry of Labour,' he says. 'Before I went there everyone told me it was the worst job in the world, but it was the most fascinating thing I have ever done.' The Minister, he observes, has 'no power at all—or almost none, anyway. He has to achieve all his objectives through persuasion.' The Minister of Agriculture, to end an argument with the farmers over the price review, can always thump the desk and announce that whether they like it or not This is what is going to happen. The Minister of Labour has no such deterrent up his sleeve. Lord Blakenham found it very much to his taste. He is still spoken of with some warmth in trade, union circles.

And then came the Great Upheaval, with John Hare being pitchforked into the House of Lords and the chairmanship of the party. It was, as one colleague sympathetically remarked, a hell of a time to take over. The newly-created Lord Blakenham quickly made it plain that he had no thought of fooling around with major changes in party organisation: what he wanted to do, characteristically, was to cheer up the chaps and get things working smoothly. He sees his task, once again, in terms of lubrication and concilia- tion. The Tories in the constituencies, he has been heard to say approvingly, seem to be far less volatile than a lot of people higher up in the House of Commons or the City or in Fleet Street. If they can be fully mobilised, he says, again, then the party can 'do a Truman' in October.

" It is true, of course, that he also predicted that the TOries would win the Greater London Coun- cil elections. However, win or lose in October, and come triumph or a bloodbath of recrimina- tions, it is unthinkable that any Tory will say of their chairman that he is anything other than an awfully nice chap.