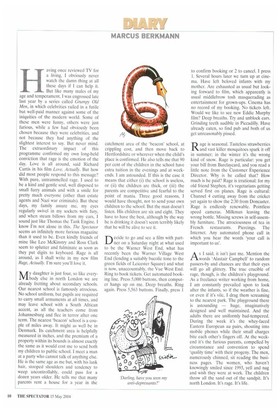 H aving once reviewed TV for a living, I obviously never

watch the damn thing at all these days if I can help it. But like many males of my age and temperament, I was engrossed late last year by a series called Grumpy Old Men, in which celebrities railed in a futile but well-paid manner against some of the iniquities of the modern world. Some of these men were funny, others were just furious, while a few had obviously been chosen because they were celebrities, and not because they had anything of the slightest interest to say. But never mind. The extraordinary impact of this programme confirmed my own long-held conviction that rage is the emotion of the day. Love is all around, said Richard Curtis in his film Love, Actually. But how did most people respond to this message? With pure, untrammelled rage. I used to be a kind and gentle soul, well disposed to small furry animals and with a smile for pretty much everyone (other than estate agents and Nazi war criminals). But these days, my family assure me, my eyes regularly swivel in my sockets with fury, and when steam billows from my ears, I sound just like Thomas the Tank Engine. I know I'm not alone in this. The Spectator seems an infinitely more furious magazine than it used to be. Even kindly friends of mine like Leo McKinstry and Ross Clark seem to splutter and fulminate as soon as they put digits to keyboard. Rage is all around, as I shall write in my new film Rage, Actually. I'm sure you'll love it.

My daughter is just four, so like everybody else in north London we are already fretting about secondary schools. Our nearest school is famously atrocious. No school uniform, but pupils are required to carry small armaments at all times, and may leave school with a South African accent, as all the teachers come from Johannesburg and flee in terror after one term. The nearest 'beacon' school is a couple of miles away. It might as well be in Denmark. Its catchment area is helpfully measured in inches, and the premium of a property within its bounds is almost exactly the same as it would cost me to send both my children to public school. I meet a man at a party who cannot talk of anything else. He is the same age as me but, with his lank hair, stooped shoulders and tendency to weep uncontrollably, could pass for a dozen years older. He tells me that many parents rent a house for a year in the

catchment area of the 'beacon' school, at crippling cost, and then move back to Hertfordshire or wherever when the child's place is confirmed. He also tells me that 90 per cent of the children in the school have extra tuition in the evenings and at weekends. I am astounded. If this is the case it means that either (i) the school is useless, or (ii) the children are thick, or (iii) the parents are competitive and fearful to the point of mania. Three good reasons, I would have thought, not to send your own children to the school. But the man doesn't listen. His children are six and eight. They have to have the best, although by the way he is drinking it doesn't seem terribly likely that he will be alive to see it.

Decide to go and see a film with partner on a Saturday night at what used to be the Warner West End, what has recently been the Warner Village West End (lending a suitably bucolic tone to the green fields of Leicester Square) and what is now, unaccountably, the Vue West End. Ring to book tickets. Get automated booking line. Press 5,000 buttons, then computer hangs up on me. Deep breaths. Ring again. Press 5,563 buttons. Finally, press I

to confirm booking or 2 to cancel. I press 1. Several hours later we turn up at cinema. Have left beloved infants with my mother. Are exhausted as usual but looking forward to film, which apparently is usual middlebrow tosh masquerading as entertainment for grown-ups. Cinema has no record of my booking. No tickets left. Would we like to see new Eddie Murphy film? Deep breaths. Try and unblock ears. Grinding teeth audible in Piccadilly. Have already eaten, so find pub and both of us get unreasonably pissed.

Rage is seasonal. Tasteless strawberries and vast killer mosquitoes spark it off in summer; in the winter it's the wrong kind of snow. Rage is particular: you get your bill from Barclaycard, and you read a little note from the Customer Experience Director. Why is he called that? How much is he paid? Rage is irrational: for my old friend Stephen, it's vegetarians getting served first on planes. Rage is cultural: Channel 4 cutting away from the cricket yet again to show the 2:30 from Doncaster. Rage is endlessly renewable. Pointless speed cameras. Milkman leaving the wrong bottle. Missing screws in self-assembly furniture. The atrociousness of tea in French restaurants. Piercings. The Internet. Any automated phone call in which you hear the words 'your call is important to us'.

As I said, it isn't just me. Mention the words 'Alastair Campbell' to random passers-by and chances are that their eyes will go all glittery. The true crucible of rage, though, is the children's playground. As a freelance writer working from home, I am constantly prevailed upon to look after the infants, so if the weather is fine, or even if it's vile, I drag them screaming to the nearest park. The playground there is astounding — huge, imaginatively designed and well maintained. And the adults there are uniformly bad-tempered. During the week it's the whey-faced Eastern European au pairs, shouting into mobile phones while their small charges bite each other's fingers off. At the weekend it's the furious parents, compelled by circumstance and convention to spend 'quality time' with their progeny. The men, numerously chinned, sit reading the business pages. The women, who haven't knowingly smiled since 1993, yell and nag and wish they were at work. The children throw all the sand out of the sandpit. It's north London. It's rage. It's life.