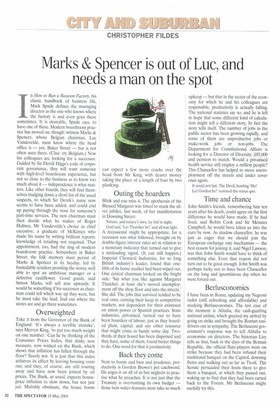 Marks & Spencer is out of Luc, and needs a man on the spot

In How to Run a Bassoon Factory, his classic handbook of business life, Mark Spade defines the managing director as the one who knows where the factory is and even goes there sometimes. It is desirable, Spade says, to have one of these. Modern boardroom practice has moved on, though: witness Marks & Spencer, whose Belgian chairman, Luc Vandevelde, must know where the head office is — yes, Baker Street — but is not often seen there. (Clue: try Belgium.) Now his colleagues are looking for a successor. Guided by Sir Derek Higgs's code of corporate governance, they will want someone with high-level boardroom experience, but not so close to the business as to know too much about it — independence is what matters. Like other boards, they will find themselves trudging down a short list of the usual suspects, to which Sir Derek's name now seems to have been added, and could end up paying through the nose for someone's part-time services. The new chairman must then decide what he makes of Roger Holmes, Mr Vandevelde's choice as chief executive, a graduate of McKinsey who made his name by writing brilliant reports: knowledge of retailing not required. That appointment, too, had the ring of modern boardroom practice. Somewhere in Baker Street, the folk memory must persist of Marks & Spencer in its heyday, led by formidable retailers prowling the stores, well able to spot an ambitious manager or a defective cauliflower. Good goods, said Simon Marks, will sell arse upwards. It would be something if his successor as chairman could tell which way up they were, but he must take the lead, find out where the stores are and go there sometimes.

Take it from the Governor of the Bank of England: 'It's always a terrible mistake', says Mervyn King, 'to put too much weight on one number,' Can he be thinking of the Consumer Prices Index, that dinky new measure, now wished on the Bank, which shows that inflation has fallen through the floor? Surely not. It is just that this index achieves its effect by leaving housing costs out, and they, of course, are still roaring away and have now been joined by oil prices. The Bank, as usual, expects houseprice inflation to slow down, but not just yet. Mulishly obstinate, the house boom

can expect a few more cracks over the head from Mr King, with dearer money taking the place of a length of four by two planking.

Blink and you miss it. The apotheosis of the Blessed Margaret was timed to mark the silver jubilee, last week, of her manifestation in Downing Street:

God said, let Thatcher be!' and all was light. A recessional might be appropriate, for a recession was what followed, brought on by double-figure interest rates set in relation to a monetary indicator that turned out to give a misleading signal. (It can still happen.) Imperial Chemical Industries, for so long British industry's leader, found that onefifth of its home market had been wiped out. One cynical chairman looked on the bright side: 'Say what you like against Margaret Thatcher, at least she's moved unemployment off the shop floor and into the streets.' She did. The jobs that survived tended to be real ones, earning their keep in competitive markets, not dependent for their existence on union power or Spanish practices. State industries, privatised, turned out to have been hoarders of labour, just as they hoarded plant, capital, and any other resource that might come in handy some day. Twothirds of their hoard has been dispersed and they have, some of them, found better things to do. One word for that is productivity.

Next to boom and bust and prudence, productivity is Gordon Brown's pet catchword. He urges it on all of us but neglects to practise what he preaches. It is not just that the Treasury is overrunning its own budget — those twin water-features must take so much upkeep but that in the sector of the econ omy for which he and his colleagues are responsible, productivity is actually falling. The national statistics say so, and he is left to hope that some different kind of calculation might tell a different story. In fact the story tells itself. The number of jobs in the public sector has been growing rapidly, and some of them are unproductive jobs or make-work jobs or non-jobs. The Department for Constitutional Affairs is looking for a Director of Diversity: £85,000 and pension to match. Would a privatised health service still employ a million people? This Chancellor has helped to move unemployment off the streets and under cover once again: It could not last. The Devil, howling 'Ho!

John Smith's friends, remembering him ten years after his death, could agree on the first difference he would have made. If he had lived, said Robin Cook and Sir Menzies Campbell, he would have taken us into the euro by now. As shadow chancellor, he was just as eager that we should join the European exchange rate mechanism — the best reason for joining it, said Nigel Lawson, was that John Smith would have to think of something else. Even that reason did not turn out to be good enough. John Smith was perhaps lucky not to have been Chancellor on the long and ignominious day when we were forced out.

I have been in Rome, updating my Negroni index (still refreshing and affordable) and studying Berlusconomics. The test case of the moment is Alitalia, the cash-guzzling national airline, which greeted my arrival by going on strike and brought the Roman taxidrivers out in sympathy. The Berlusconi government's response was to tell Alitalia to economise on directors. The historian Livy tells us that, back in the days of the Roman Republic, the official flute-players went Oft strike because they had been refused their traditional banquet on the Capitol, downing flutes and walking out as far as Tivoli. rft Senate persuaded their hosts there to give them a banquet, at which they passed out, waking up to find that they had been carted back to the Forum. Mr Berlusconi might usefully try this.