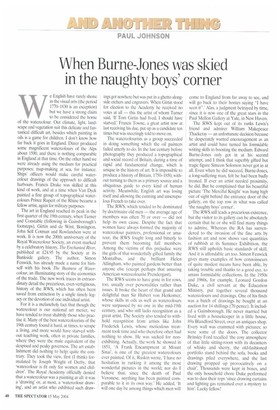 When Burne-Jones was skied in the naughty boys' corner

Nve English have rarely shone in the visual arts (the period 1770-1830 is an exception) but we have a strong claim to be considered the home of the watercolour. Our climate, light, landscape and vegetation suit this delicate and fantastical difficult art, besides which painting in oils is a game for children. I don't know how far back it goes in England. Diner produced some magnificent watercolours of the Alps about 1500, and there is nothing comparable in England at that time. On the other hand we were already using the medium for practical purposes; map-making at sea, for instance. Ships' officers would make careful watercolour drawings of the approach to difficult harbours. Francis Drake was skilled at this kind of work, and at a time when Van Dyck painted a fine group of topographical watercolours Prince Rupert of the Rhine became a fellow artist, again for military purposes.

The art in England reached its peak in the first quarter of the 19th century, when Turner and Constable (following in Gainsborough's footsteps), Girtin and de Wint, Bonington, John Sell Cotman and Rowlandson were at work. It is now the 200th anniversary of the Royal Watercolour Society, an event marked by a celebratory history. The Enchanted River, published at £24.95 by the Society at its Bankside gallery. The author, Simon Fenwick, has already made a name for himself with his book The Business of Watercolour, an illuminating story of the economics of the trade. The new work traces in extraordinary detail the precarious, even vertiginous, history of the RWS, which has often been saved from extinction by a single timely legacy or the devotion of one individual artist.

For it is a melancholy fact that though the watercolour is our national art metier, we have tended to treat shabbily those who practise it. Many of the best watercolourists of the 19th century found it hard, at times, to scrape a living, and more would have starved without teaching work, often in private families, where they were the male equivalent of the despised and peaky governess. The art establishment did nothing to help; quite the contrary. They took the view, first (I think) formulated by Joseph Wright of Derby, that 'watercolour is fit only for women and children'. The Royal Academy officially denied that a watercolour was a painting at all: it was a 'drawing' or, at most, a 'watercolour drawing', and an artist who exhibited such draw

ings got nowhere but was put in a ghetto alongside etchers and engravers. When Girtin stood for election to the Academy he received no votes at all — this the artist of whom Turner said, 'If Tom Girtin had lived, I should have starved.' Francis Towne, a great artist now at last receiving his due, put up as a candidate ten times but was sneeringly told to move on.

The watercolourists as a group succeeded in doing something which the oil painters failed utterly to do. In the last century before photography they produced a topographical and social record of Britain, during a time of rapid and fundamental change, which is unique in the history of art. It is impossible to produce a history of Britain, 1750-1850, without turning to them as a primary source and a ubiquitous guide to every kind of human activity. Meanwhile, English art was losing itself and allowing the cunning and unscrupulous French to take over.

The RWS, which tended to be dominated by doctrinaire old men — the average age of members was often 70 or over — did not help its own cause. Despite the fact that women have always formed the majority of watercolour painters, professional or amateur, the RWS fought long and bitterly to prevent them becoming full members. Among the victims of this prejudice were the girls of that wonderfully gifted family the Montalbas, and the brilliant Helen Allingham, who painted gardens better than anyone else (except perhaps that amazing American watercolourist Prendergast).

The RWS seems to have gone in for rows. too, usually over personalities rather than issues. It broke the heart of that grand and delightful man Sir Hubert von Herkomer, whose skills in oils as well as watercolours were surpassed by no one in the mid-19th century, and who still lacks recognition as a great artist. The Society also tended to withhold recognition from artists like John Frederick Lewis, whose meticulous treatment took time and who therefore often had nothing to show. He was sacked for nonexhibiting. Actually, the work he showed in 1851, 'A Frank Encampment at Mount Sinai', is one of the greatest watercolours ever painted. Of it, Ruskin wrote, 'I have no hesitation in ranking it among the most wonderful pictures in the world; nor do I believe that, since the death of Paul Veronese, anything has been painted comparable to it in its own way.' He added, 'It will one day be among things which men will come to England from far away to see, and will go back to their homes saying "I have seen it".' Alas, a judgment betrayed by time, since it is now one of the great stars in the Paul Mellon Gallery at Yale, in New Haven.

The RWS kept out of its ranks Lewis's friend and admirer William Makepeace Thackeray — an unfortunate decision because he desperately wanted encouragement as an artist and could have turned his formidable writing skills to boosting the medium. Edward Burne-Jones only got in at his second attempt, and I think that superbly gifted but tragic figure Simeon Solomon never got in at all, Even when he did succeed, Burne-Jones, a long-suffering man, felt he had been badly treated. If ever an artist needed proximity, he did. But he complained that his beautiful picture 'The Merciful Knight' was hung high out of sight behind the entrance door of the gallery, on the top row in what was called 'the naughty boys' corner'.

The RWS still leads a precarious existence, but the visitor to its gallery can be absolutely certain that he or she will find many things to admire. Whereas the RA has surrendered to the invasion of the fine arts by fashion art and now shows vast quantities of rubbish at its Summer Exhibition, the RWS still upholds basic standards of skill. And it is affordable art too. Simon Fenwick gives many examples of how connoisseurs of quite modest means have been able, by taking trouble and thanks to a good eye, to amass formidable collections. In the 1950s and 1960s, for example, Leonard Gordon Duke, a civil servant at the Education Ministry, put together several thousand watercolours and drawings. One of his finds was a batch of drawings he bought at an auction for 14 shillings (70 pence). It included a Gainsborough. He never married but lived with a housekeeper in a little house, 89a Blandford Street, over an antiques shop. Every wall was crammed with pictures; so were some of the doors. The collector Brinsley Ford recalled 'the cosy atmosphere of that little sitting-room with its decanters of whisky and sherry, the old-fashioned portfolio stand behind the sofa, books and drawings piled everywhere, and the last drawing propped up provocatively on a chair'. Thousands were kept in boxes, and the only household chore Duke performed was to dust their tops 'since drawing curtains and lighting gas remained ever a mystery to him'. Lucky fellow!