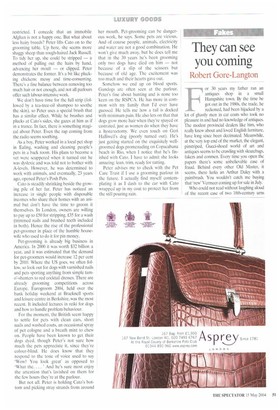 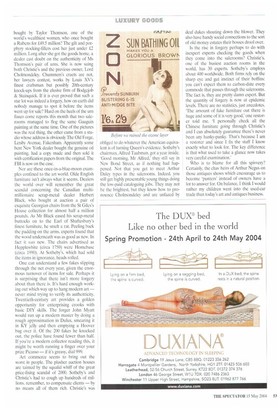 They can see you corning

For 30 years my father ran an antiques shop in a small Hampshire town. By the time he got out in the 1980s, the trade, he reckoned, had been hijacked by a lot of ghastly men in car coats who took no pleasure in and had no knowledge of antiques. The modest provincial dealers like him, who really knew about and loved English furniture, have long since been decimated. Meanwhile, at the very top end of the market, the elegant, pinstriped, Gucci-shoed world of art and antiques seems to be crawling with sleazebags, fakers and conmen. Every time you open the papers there's some unbelievable case of fraud. Behind every other Old Master, it seems, there lurks an Arthur Daley with a paintbrush. You wouldn't catch me buying that 'new' Vermeer coming up for sale in July.

Who could not read without laughing aloud of the recent case of two 18th-century urns bought by Taylor Thomson, one of the world's wealthiest women, who once bought a Rubens for £49.5 million? The gilt and porphyry stocking-fillers cost her just under £2 million. Long after she got the goods home, a dealer cast doubt on the authenticity of Ms Thomson's pair of urns. She is now suing both Christie's and the previous owner, Lord Cholmondeley. Chummers's cruets are not, her lawyers contest, works by Louis XV's finest craftsman but possibly 20th-century knock-ups from the elusive firm of Bodgejob & Stainquick. If it is ever proved that such a star lot was indeed a forgery. how on earth did nobody manage to spot it before the items went up for sale? Hard on the heels of the urn fiasco come reports this month that two salerooms managed to flog the same Gauguin painting at the same time. One of the pictures was the real thing, the other came from a studio whose address is obviously The Old Forge, Letsby Avenue, Fakenham. Apparently some bent New York dealer bought the genuine oil painting, had a copy made and then sold it with certification papers from the original. The FBI is now on the case.

Nor are these once-in-a-blue-moon examples confined to the art world. Olde English furniture isn't always what it seems. Dealers the world over will remember the great scandal concerning the Canadian multimillionaire scrap-metal dealer Herbert Black, who bought at auction a pair of exquisite Georgian chairs from the St Giles's House collection for almost half a million pounds. As Mr Black eased his scrap-metal buttocks on to the Earl of Shaftesbuty's finest furniture, he smelt a rat. Peeling back the padding on the arms, experts found that the wood underneath was as good as new. In fact it was new. The chairs advertised as Hepplewhite (circa 1750) were Homebase (circa 1990). At Sotheby's, which had sold the items in ignorance, heads rolled.

One can understand a few fakes slipping through the net every year, given the enormous turnover of items for sale. Perhaps it is surprising that there isn't more forgery about than there is. It's hard enough working out which way up to hang modern art — never mind trying to verify its authenticity. Twentieth-century art provides a golden opportunity for enterprising crooks with basic DIY skills. The forger John Myatt would run up a modern master by doing a rough approximation in Dulux, smearing it in KY jelly and then emptying a Hoover hag over it. Of the 200 fakes he knocked out, the police have found fewer than half. If you're a modern collector reading this, it might be worth running a finger over your prize Picasso — if it's greasy, dial 999.

Art commerce seems to bring out the worst in people. The plusher auction houses are tainted by the squalid whiff of the great price-fixing scandal of 2000. Sotheby's and Christie's had to cough up hundreds of millions, remember, to compensate clients — by no means all of them rich. Christie's was

obliged to do whatever the American equivalent is of turning Queen's evidence. Sotheby's chairman, Alfred Taubman, got a year inside. 'Good morning, Mr Alfred,' they still say in New Bond Street, as if nothing had happened. Not that you get to meet Arthur Daley types in the salerooms. Indeed, you still get highly presentable young things doing the low-paid cataloguing jobs. They may not be the brightest, but they know how to pronounce Cholmondeley and are unfazed by

deaf dukes shouting down the blower. They also have handy social connections to the sort of old money estates their bosses drool over.

Is the rise in forgery perhaps to do with inexpert experts checking the goods when they come into the salerooms? Christie's, one of the busiest auction rooms in the world, has 30 experts. Sotheby's employs about 400 worldwide. Both firms rely on the sharp eye and gut instinct of their boffins: you can't expect them to carbon-date every commode that passes through the salerooms. The fact is, they are pretty damn expert. But the quantity of forgery is now at epidemic levels. There are no statistics, just anecdotes. The amount of fake furniture out there is huge and some of it is very good.' one restorer told me. 'I personally check all the Chinese furniture going through Christie's and I can absolutely guarantee there's never been any hanky-panky. That's because I am a restorer and since I fa the stuff I know exactly what to look for. The key difference is that what used to take a glance now takes very careful examination.'

Who is to blame for all this spivvery? Certainly, the chav heirs of Arthur Negus on those antiques shows which encourage us to become 'punters' instead of owners have a lot to answer for. On balance, I think I would rather my children went into the used-car trade than today's art and antiques business.