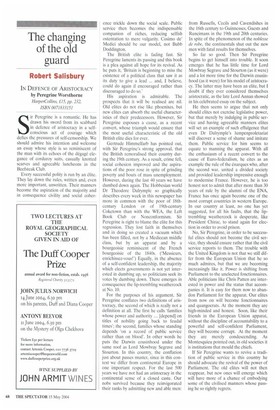 The changing of the old guard

IN DEFENCE OF ARISTOCRACY by Peregrine Worsthorne

Sir Peregrine is a romantic. He has drawn his sword from its scabbard in defence of aristocracy in a selfconscious act of courage which defies the pressures of self-censorship. We should admire his intention and welcome an essay whose style is so reminiscent of the man with its echoes of the &gage elegance of corduroy suits, casually knotted scarves and agreeable luncheons in the Beefsteak Club.

Every successful polity is run by an elite. They lay down the rules, written and, even more important, unwritten. Their manners become the aspiration of the majority and in consequence civility and social coher ence trickle down the social scale. Public service then becomes the indispensable companion of riches, reducing selfish ostentation to mere vulgarity. Cosimo de' Medici should be our model, not Bubb Doddington.

The British elite is fading fast. Sir Peregrine laments its passing and this book is a plea against all hope for its revival. As he puts it, 'Britain is beginning to miss the existence of a political class that saw it as its duty to give a lead ... and, I believe, could do again if encouraged rather than discouraged to do so.'

His aspiration is admirable. The prospects that it will be realised are nil. Old elites do not rise like phoenixes, but new elites can absorb the useful characteristics of their predecessors. However, Sir Peregrine espouses a cause, as a recent convert, whose triumph would ensure that the most useful characteristic of the old British elite dies for ever.

Gertrude Himmelfarb has pointed out, with Sir Peregrine's strong approval, that the British remoralised their country during the 19th century. As a result, crime fell, social cohesion improved and the aspirations of the poor rose in spite of grinding poverty and bouts of mass unemployment. However, during the last 40 years we have dumbed down again. The Hobbesian world Dr Theodore Dalrymple so graphically describes every week in this newspaper has more in common with the poor of 18thcentury London or of 19th-century Coketown than with the WEA, the Left Book Club or Nonconformism. Sir Peregrine is right to blame the elite for this regression. They lost faith in themselves and in doing so created a vacuum which has been filled, not by a Medicean middle class, but by an apparat and by a bourgeoisie reminiscent of the French bourgeoisie of the 1840s. ('Messieurs, enrichissez-vous!') Equally, in the absence of a self-confident leadership, the majority which elects governments is not yet interested in dumbing up, so politicians seek its votes by dumbing down. There emerges in consequence the lip-trembling weathercock at No. 10.

For the purposes of his argument, Sir Peregrine conflates two definitions of aristocracy, the second of which is really not a definition at all. The first he calls 'families whose power and authority ... [depend] on titles of nobility going back to feudal times'; the second, families whose standing depends 'on a record of public service rather than on blood'. In other words he puts the Darwin cousinhood under the same roof as Lord Mowbray Segrave and Stourton. In this country, the conflation just about passes muster, since in this context we differ from continental Europe in one important respect. For the last 500 years we have not had an aristocracy in the continental sense of a closed caste. Our nobs survived because they reinvigorated their ranks by admitting new and able men: from Russells, Cecils and Cavendishes in the 16th century to Guinnesses, Guests and Runcimans in the 19th and 20th centuries. In spite of the phenomenon of the noblesse de robe, the continentals shut out the new men with fatal results for themselves.

So far so good. Then Sir Peregrine begins to get himself into trouble. It soon emerges that he has little time for Lord Mowbray Segrave and Stourton (as it were) and a lot more time for the Darwin cousinhood (as it were) for his model of aristocracy. The latter may have been an elite, but I doubt if they ever considered themselves aristocratic, as the late Lord Annan showed in his celebrated essay on the subject.

He then seems to argue that not only should elites not exercise legislative power, but that merely by indulging in public service and having agreeable manners elites will set an example of such effulgence that even Dr Dalrymple's lurnpenproletariat will discover a sense of shame and imitate them. Public service for him seems to equate to manning the apparat. With all the enthusiasm of a recent convert to the cause of Euro-federalism, he cites as an example the rule of the &torques who, after the second war, united a divided society and provided leadership impressive enough to modernise France. However, he is too honest not to admit that after more than 30 years of rule by the alumni of the ENA, France has once again become one of the most corrupt countries in western Europe. In our country at least, no one has yet suggested, for all his faults, that the liptrembling weathercock is desperate, like President Chirac, to stand again for election in order to avoid prison.

No, Sir Peregrine, in order to be successful elites should not become the civil service, they should ensure rather that the civil service reports to them. The trouble with the United Kingdom is not that we still differ from the European Union that he so much admires, but that we are becoming increasingly like it. Power is shifting from Parliament to the unelected fonctionnaires. Able politicians like Chris Patten are interested in power and the status that accompanies it. It is easy for them now to abandon Parliament for the apparat. Our elites from now on will become fonctionnaires and quangocrats. At the moment they are high-minded and honest. Soon, like their friends in the European Union apparat, without the discipline of accountability to a powerful and self-confident Parliament, they will become corrupt. At the moment they are merely condescending. As Montesquieu pointed out, in old societies it is institutions that mould the chiefs.

If Sir Peregrine wants to revive a tradition of public service in this country he should advocate the revival of the power of Parliament. The old elites will not then reappear, but new ones will emerge which will have more of a chance of embodying some of the civilised manners whose passing he so rightly regrets.