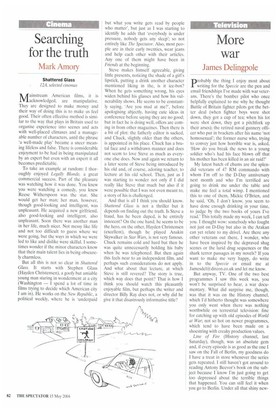 Searching for the truth

Mainstream American films, it is acknowledged, are manipulative. They are designed to make money and their way of doing this is to make us feel good. Their often effective method is similar to the way that plays in Britain used to organise experience into scenes and acts with well-placed climaxes and a manageable number of characters, until the phrase 'a well-made play' became a sneer meaning lifeless and false. There is considerable enjoyment to be had in being manipulated by an expert but even with an expert it all becomes predictable.

To take an example at random: I thoroughly enjoyed Legally Blonde, a great commercial success. Part of the pleasure was watching how it was done. You knew you were watching a comedy, you knew Reese Witherspoon was the star. She would get her man; her man, however, though good-looking and intelligent, was unpleasant. He acquired a new girlfriend, also good-looking and intelligent, also unpleasant. Soon there was another man in her life, much nicer. Not messy like life and not too difficult to guess where we were going, but the ways in which we were led to like and dislike were skilful. I sometimes wonder if the minor characters know that their main talent lies in being obscurely charmless.

But all this is not so clear in Shattered Glass. It starts with Stephen Glass (Hayden Christensen), a goofy but amiable young man staring in wonderment at a city (Washington — I spend a lot of time in films trying to decide which American city I am in). He works on the New Republic, a political weekly, where he is 'underpaid but what you write gets read by people who matter', but just as I was starting to identify he adds that 'everybody is under pressure, nobody gets any sleep'; so not entirely like The Spectator. Also, most people are in their early twenties, wear jeans and help each other with their articles. Any one of them might have been in Friends at the beginning.

Steve makes himself agreeable, giving little presents, noticing the shade of a girl's lipstick, putting a drink another character mentioned liking in the, is it ice-box? When he gets something wrong, his eyes widen behind his glasses and how his vulnerability shows. He seems to be constantly saying, 'Are you mad at me?', before apologising abjectly, having cute ideas in conference before saying they are no good; but in fact he is doing well, offers are coming in from other magazines. Then there is a bit of plot: the fatherly editor is sacked, and Chuck, slightly older than the others, is appointed in his place. Chuck has a brutal face and a withdrawn manner and does not seem to love Steve as much as everyone else does. Now and again we return to a later scene of Steve being introduced by his old and, of course, adoring teacher, to lecture at his old school. Then, just as I was starting to wonder not only if I did really like Steve that much but also if it were possible that I was not even meant to, a story of his is challenged.

And that is all I think you should know. Shattered Glass is not a thriller but it depends on finding out the truth. Is Steve a fraud, has he been duped, is he entirely innocent? On the one hand, he seems to be the hero, on the other, Hayden Christensen (excellent), though he played Anakin Skywalker in Star Wars, is not very famous. Chuck remains cold and hard but then he was quite unnecessarily holding his baby when he was telephoned. But then again this feels near to an independent film, and perhaps such considerations do not apply. And what about that lecture, at which Steve is still revered? The story is true, which way does that point? That is how I think you should watch this pleasantly enjoyable film, but perhaps the writer and director Billy Ray does not, or why did he give it that disastrously informative title?