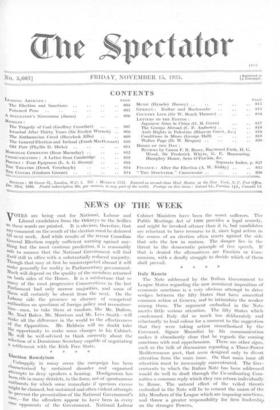 Page 1, 15 November 1935 — Italy Reacts The Note addressed by the Italian Government to
Close

Italy Reacts The Note addressed by the Italian Government to

League States regarding the now imminent imposition of economic sanctions is a very obvious attempt to drive wedges between the fifty States that have concerted common action at Geneva, and to intimidate the weaker among them. The argument embodied in the Note merits little serious attention. The fifty States which condemned Italy did so much too deliberately and reluctantly to lend colour for a moment to the suggestion that they were taking action unauthorised by the Covenant. Signor Mussolini by his communication makes it abundantly clear that he regards the coming sanctions with real apprehension. There are other signs, such as the talk of discussions regarding a Three-Power Mediterranean pact, that seem designed only to divert attention from the main issue. On that main issue all attention must be increasingly concentrated. The Gov- ernments to which the Italian Note has been addressed would do well to draft through the Co-ordinating Com- mittee a common reply which they can return individually to Rome. The natural effect of the veiled threats embodied in the Note will be to cement the union of the fifty Members of the League which are imposing sanctions, and throw a greater responsibility for firm leadership on the stronger Powers,