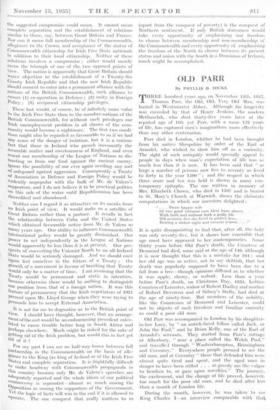 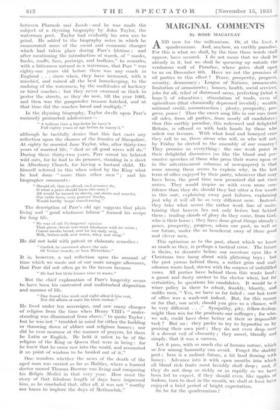 THREE hundred years ago, on November 15th, 1635, Thomas Parr, the Old, Old, Very Old Man, was buried in Westminster Abbey. Although his longevity was exceeded by that of Henry Jenkins, the modern Methuselah, who died thirty-five years later at the reputed age of 169, yet Parr, with a mere 152 years of life, has captured men's imaginations more effectively than any other centenarian.

Parr died in London, whither he had been brought from his native Shropshire by order of the Earl of Arundel, who wished to show, him off as a curiosity.• The sight of such antiquity would specially 'appeal to people in days when man's expectation of life was so much less than it is now. It has been said that " as large a number of persons now live to seventy as lived to forty in the year 1500"; and the respect in which three score and ten was held is shown in many con- temporary epitaphs. The one written in memory of Mrs. Elizabeth Chown, who died in 1597 and is buried in St. Mary's Church at Warwick, shows the elaborate computations in which our ancestors delighted : " . . Twice happio wife

Of two good virtuous men blest from above, With both and without both a godly life Till seventie five she lived in perfect love. Resting a widow eight and twontie yeares. . . ."

It is quite disappointing to find that, after all, the lady was only seventy-five, but it shows how venerable that age must have appeared to her contemporaries. Some thirty years before Old Parr's death, the Countess of Desmond had died, some said at the age of 140, although it is now thought' that this is a mistake for 104 ; and her old age was so active, not to say skittish, that her death was popularly supposed to have been due to a fall from a tree—though opinions differed as to whether it was apple; cherry, or walnut. Less than a year before Parr's death, on Christmas Day, 1634, Lettice Countess of Leicester, widow of Robert Dudley and mother of Robert Devereux and of Sidney's Stella, had died at the age of ninety-four. But members of the nobility, like the Countesses of Desmond and Leicester, could not be objects of such frivolous and familiar curiosity as could a poor old man.

Old Parr was accompanied to London by his daughter- in-law Lucy, by " an antick-faced fellow called • jack, or John the Fool," and by Brian 'Kelly, one of the Earl of Arundel's servants. They started from Parr's cottage at Alberbury, " near a place called the Welch Pool," and travellel through " Woolverhampton, Brimingham and Coventry." • EverYwhere people pressed to sec the 91d man, and at Coventry " those that defended him were almost quite • tired and spent, and the aged man in clanger to have been stifled . . . so greedy are the vulgar to hearken to, or gaze upon novelties." The journey, the excitement, and the change of life proved, hoWever, too much for the poor old. man, and he died after less than a month of London life.

During the month, however, he was taken to see King Charles I—an interview comparable with that between Pharaoh and Jacob—and he was made the subject of a rhyming biography by John Taylor, the waterman poet. Taylor had evidently his own axe to grind. He added to the biography notes in which he enumerated some of the social and economic changes which had taken place during Parr's lifetime ; and after mentioning the introduction of starch, of " masks, busks, muffs, fans, periwigs, and bodkins," he remarks, with a bitterness natural in a waterman, that Parr " was eighty-one years old before there was any coach in England . . . since when, they have increased, with a mischief, and ruined all the best housekeeping, to the undoing of the waterman, by the multitudes of hackney or hired coaches : but they never swarmed so thick to pester the streets, as they do now, till the year 1605, and then was the gunpowder treason hatched, and at that time did the coaches breed and multiply." • In the rhyming biography, Taylor dwells upon Parr's 'curiously protracted adolescence- " A tedious time a batcholor he tarry'd

Full eighty years of ago before ho marry'd."

although he tactfully denies that this fact casts any reflection upon the charms of the females of Shropshire.

• At eighty he married Jane Taylor, who, after thirty-two years of married life, " died as all good wives will do." During these thirty-two years, Parr sowed his belated wild oats, for he had to do penance, standing in a sheet inAlberbury Church, for having a bastard child. He himself referred to this when asked by the King what he had done " more than other men " ; and his biographer comments :

" Should all, that so offend, such penance do, O what a price should linen rise unto 7 All would be turned to sheets, our shirts and smocks, Our table linen, very porters' frocks, Would hardly 'scapo transforming."

The description of Parr's old age suggests that plain living and " good wholsome labour " formed his recipe for long life.

" Ho was of old Pythagoras' opinion That green cheese was most wholsome with an onion ; Coarse meslin bread, and for his daily swig, Milk, butter-milk and water, whey and whig."

He did not hold with patent or elaborate remedies :

" Garlick he esteemed above the rate Of Venice treacle, or best Mithridate."

It is, however, a sad reflection upon the amount of time which we waste out of our more meagre allowance, that Parr did not often go to the tavern because

" He had but little leisure time to waste."

But the chief explanation of Parr's longevity seems to have been his contented and undisturbed disposition and manner of life.

" Day found him work and night allow'd him rest, Nor did affairs of state his brain molest."

He lived under ten sovereigns, and saw many changes of religion from the time when Henry " under- standing was illuminated from above," to quote Taylor ; but he was 'not " troubled in mind for either the building or throwing down of a.bbies and religious houses ; nor did he ever murmur at the manner of prayers, let them be Latin or English. He held it safest to be of the religion of the King or Queen that were in being : for lie knew that he came raw into the world, and accounted it no point of wisdom to be broiled out of it."

One wonders whether the news of the death of the aged man was carried as far as Halifax, where a learned doctor named Thomas Browne was living and composing his Religio Medici in that very year. How must the story of that fabulous length of days have impressed him, as he concluded that, after all, it was not " worthy our knees to implore the days of Methuselah."