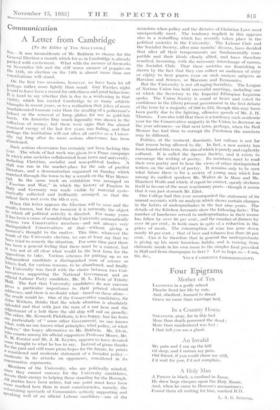 ..[To the Editor of THE SPECTATOR4 81115—It was inconsiderate of Mr. Baldwin to choose for the General Election a month which for us in Cambridge is already Packed with excitement.. What with the menace of fireworks Cia November 5th and the still worse menace of poppies on the 11th, an . election on the 14th is almost more than our

On the first two occasions, however, we have been let off perhaps rather more lightly than usual. ...Guy Fawkes night ia said to have been a record for orderliness and good behaviour. It is hard to say whether this is due to a weakening in that 1.irility which has carried Cambridge to so many athletic iiuMplis in recent years, or to a realisation that jokes of more noadulterated humour exist than the stealing of it policeman's helmet or the removal of lamp globes for use as gold-fish bowls. On .Armistice Day much ingenuity was shown in the collection . of money, but there were .. signs that the almost. maniacal energy of the last few years was fading, and that Perhaps the institution will not after all survive as a Univer- flitY rag long after its more serious observance has been abandoned.

Such serious observance has certainly not been lacking this Year. The whole of last week was given to a Peace campaign

Which nine societies collaborated from town and university, including Christian, socialist and non-political bodies. A literature, was run in the market-place for the sale of pacifist literature, :and a demonstration organised on Sunday which marched' through the town to lay a wreath on the War Memo-

1. In the same week an exhibition was arranged on

Paseism and War," in • which the history of Fascism in Italy . and Germany was made visible by material syste- nattically collected and brilliantly arranged, so that the salient facts met even the idlest eye. When this letter appears the Election will be .over and the results known, but for the moment it is naturally the object to Which all political activity is directed. For many years it has been a cause of scandal that the University automatically returns two Conservative members—and not always very distinguished Conservatives at • that—without giving a inonient's ' thought to the matter. This time, whatever the !Unit of the University election, we can at least say that we !lave tried to remedy the situation. For some time past there !ins been a general feeling that there must be a contest, but It was not at all clear what would be the best form for the nPposition to take. Various schemes for putting up as an dependent candidate a distinguished man of science or letters had, for various reasons, to be abandoned, and finally the University' was faced with the choice between two Con- servatives supporting the National Government and an cial Labour Party candidate, Mr. H. L. Elvin of Trinity 'alb • The • fact that University candidates do not canvass glues a particular importance to their printed electoral addresses, and Ihere is no doubt what—based on these alone—. the result would. be. One of the Conservative candidates, Sir J9.114 Withers, thinks that the whole situation is absolutely 6Plendid and that with just the turn of a nut here and the djustrnent of a bolt there the old ship will sail on grandly. 1111c.other, Mr: Kenneth Pickthorn, is less happy, but his fears are Particularly of " some other Government, no one knows ,"'hat., with' o one knows what principles, what policy, or what the.-bogey alternative to Mr. Baldwin. Mr. Elvin,. 11110 counts among his official supporters Professor Moore, Mr. M. Forster and Mr. J. M. Keynes, appears, to have devoted some thought to what he has to say. Instead of pious thanks for the past and still more pious hopes for the future, he prints 1. considered and moderate statement of a Socialist policy- inoderate in its attacks on opponents, considered in its constructive arguments.

vote their energy to helping those standing for the Borough. "'ll Parties have been active, but one point must have been 1 :astonishing marked here than in most constituencies, namely, the Stonishing spectacle of Communists actively supporting and Peaking well of an official Labour candidate—one of the occasions when policy and the dictates of Christian Love most unexpectedly meet. The tendency implicit in this appears also in a reshuffling -Mild' has recently taken place in the political societies in the University. The Labour Club and the Socialist Society, after nine months' divorce, have decided that after all their temperaments are fundamentally com- patible and their ideals closely allied, and have therefore reunited, becoming, with the necessary interchange of names, the Socialist Club. That these societies are flourishing is shown by the fact that they can collect an audience of sixty or eighty to hear papers even on such austere subjects as Marxism mid Science, or Marxism and Economics.

But the University is not all raging Socialists. The League of Nations Union has held successful meetings, including one at which the Secretary to the Imperial Ethiopian Legation spoke. The Union Society • is sound at heart and voted its confidence in the (then) present government in the first debate of the term by a majority of 590 to 224, though this may have been partly due to the fighting, offensive speech of Mr. J. IL Thomas. I am also told that there is a tendency each academic year for the Conservative majority in the Union to decrease as the year advances—so that next term, perhaps, when the Red Menace has had time to corrupt the Freshmen the numbers may be different. •

Politics, at the moment, dominate, but culture is not for that reason being allowed to die. In fact, a new society has been founded this term, the aim of which is purely and explicitly, cultural. It is called the Spenser Society, and it exists to encourage the writing of poetry. Its members meet to read. their own poetry and to hear the views of other distinguished writers on the subject of poetry. It remains only to be seen what future there is for a society of young men which has among its earliest speakers Mr. Walter de la Mare and Mr. Humbert 'Wolfe and which, if report be correct, openly declares itself in favour of the most reactionary poets—though it seems that it can just stomach Mr. Eliot.

One College had this year accompanied the statement of its annual accounts with an analysis which shows certain changes in the habits of undergraduates in the last nine years. The details of the Kitchen Accounts show the following facts : The number of luncheons served to undergraduates in their rooms has fallen by over 60 per cent., and the number of dinners by over 40 per cent., in both cases in spite of a reduction in the prices of meals. The consumption of wine has gone down nearly 40 per cent. ; that of beer and tobacco less than 20 per. cent. Can it be therefore that in general the undergraduate is giving up his more luxurious habits, and is turning from elaborate meals in his own room to the simpler food provided in Hail and from champagne to beer ? Let us hope so.—I